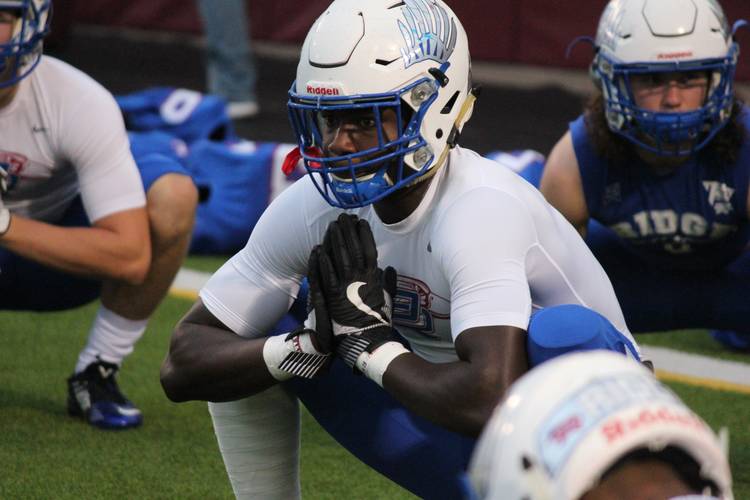 Ossai is a different breed of defensive end. The 4-star talent from Conroe Oak Ridge doesn’t specialize in taking up blocks or stopping the run. Ossai gets after the quarterback and he’s biggest remaining target for Texas defensive coordinator Todd Orlando. The 6-4, 220-pound edge-rusher will pick between Texas and Texas A&M by national signing day on Feb. 7.

“Two months ago, I would’ve said Texas A&M,” said one source close to Ossai. “To be honest, I think it is a toss-up. Since the coaching change (at Texas A&M), it could go either way.”

Ossai is relatively new to football. The Nigerian first watched a football game at 10 years old with his uncle. He remembers it involving the Pittsburgh Steelers, and he also remembers the game impacting his young interests.

“I couldn’t wait to start playing football after I watched it with my uncle and he began teaching me the game,” Ossai said back in May 2016. “My passion was soccer and track growing up because those were the major sports in Nigeria. I didn’t know anything about the sport and how to play it, so it was hard at the beginning.”

Ossai moved from wide receiver to defensive end before his sophomore season. Fast-forward two years and he’s one of the most coveted remaining defensive lineman in the nation. A&M was always his dream school throughout the process, he said, but he also has left room for himself to find other options.

“I want to major in mechanical engineering with a minor in computer science,” he said. “I’m looking for schools that offer those programs and have players who major in the same thing. It also matters how many players from my position get on the field and make it to the NFL.”

The Longhorns always needed a pass-rushing specialist in the 2018 class. Texas probably thought it needed to search elsewhere for one when Ossai made it so public throughout the recruiting cycle that Texas A&M was his preferred choice.

Then something changed, like it tends to in recruiting. Kevin Sumlin was fired and that left uncertainty surrounding the status of the assistant coaches. Ossai was specifically concerned about the long-term status of defensive ends coach Terry Price. It’s unknown whether Price will remain part of Jimbo Fisher’s staff after signing day.

Enter Oscar Giles, Texas’ defensive line coach. His job is secure through the 2018 season and he used that stability to regain a footing in the recruitment of Ossai. Now Ossai is considered a Longhorns lean and Giles should get the bulk of the credit.

“Texas has done a great job recruiting him, especially Giles,” the source said. “(Giles) is the biggest reason Texas is in this conversation.”

Ossai has done a great job remaining tight-lipped over the past month and is playing his recruitment close to the vest. In a time of leaking information and Twitter speculation, Ossai’s eventual destination remains somewhat of a mystery. As does the date for his commitment.

The safe money is currently on Texas. Giles and the Longhorns have done a great job of placing importance on Ossai while showing him where he’d fit in the scheme and academically. He isn’t a big defensive end who can take up blocks, so expect him to play outside linebacker in Texas’ scheme, much like Naashon Hughes.

This is not yet a slam dunk for Texas and the Aggies are still very much in the picture, but the momentum of Texas’ 2018 class plus the uncertainty surrounding his future position coach at A&M gives the Longhorns the advantage two weeks away from signing day.