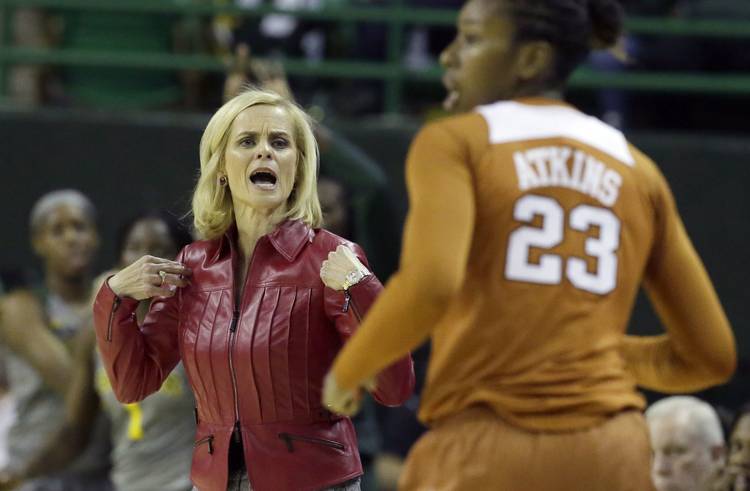 Baylor head coach Kim Mulkey calls for a timeout during the first half of an NCAA college basketball game against Texas in Waco, Texas, Monday, Feb. 6, 2017. (AP Photo/LM Otero)

When it comes to heated rivalries, few can match the fire created by Texas-Baylor in women’s basketball.

Real or imagined, the relationship between coaches Karen Aston and Kim Mulkey is, say, icy. For precautionary reasons, don’t ask either if there is “a new sheriff in town.” The answers will be filled with either blunt sarcasm or indignation.

Is Texas vs. Baylor — the two teams meet in Waco on Thursday night — the best rivalry in the country?

You can make the case for UConn-Notre Dame, two perennial powers that have faced each other every season since 1996, but their matchups no longer have conference ramifications. Duke-North Carolina and Oregon-Oregon State also are old rivalries, but none of them have been top-10 contenders recently.

“It was a definite confidence-builder, and it needed to happen for anyone to call this a rivalry,” Aston said Wednesday. The Texas coach said the seeds to the rivalry were planted when they were members of the old Southwest Conference.

Yet it’s difficult to say anyone took that matchup seriously, considering Jody Conradt’s UT program once held a 42-game winning streak over Baylor between 1976 and 1997.

Moving forward, Aston would like to start an annual game against UConn — the Longhorns have fallen to the Huskies in each of the past four seasons, including regular-season matchups in 2016 and 2017 and NCAA Tournament losses in 2014 and 2015. But Texas showed progress in last week’s 75-71 loss in Austin.

“It’s not because I think I’m going to beat (Geno Auriemma’s) butt every year, but I do at some point think we can win,” Aston said.

As for Texas-Baylor, players from both teams respect each other, UT senior guard Brooke McCarty said. She added that Aston and Mulkey are feisty competitors — especially when they play against each other. Aston served on Mulkey’s staff in 2007.

“When you have two coaches who are competitive and two teams that are competitive, games are going to seem like a big deal,” said McCarty, the reigning Big 12 player of the year.

In Waco, Mulkey praised Texas this week, saying the Longhorns have “the most talent” and “the most depth” in the Big 12. She noted the Horns have 10 McDonald’s All-Americans. Baylor has four.

“Recruiting is the lifeblood of all programs,” Mulkey said Tuesday. “When you say (the Longhorns) have improved, it starts with recruiting. And when you recruit better high school players, you instantly become a better program. … We welcome the opportunity to play a team that’s really talented.”

While basketball remains Mulkey’s identity, she said personal tragedies the past two months have put basketball in perspective. In November she took a short leave of absence after her daughter, Makenzie Fuller, lost her unborn baby girl. On Sunday, former player Chameka Scott, a member of Baylor’s 2005 NCAA championship team, died after battling cancer.

“No one is more competitive than me, but it really is just a game that I get to coach,” Mulkey said. “When you get older, the hard part is that I’m not supposed to outlive my children, my grandchildren and my players, and I struggle with that.”

“There are a lot more things in life that have much more meaning than what we’re doing,” she said. “It’s our profession and our livelihood and it means a lot to the kids and the fans. At the end of the day, though, you go home and deal with real-life problems.”

The Dotted Line: How would a commitment from Joshua Moore impact Texas’ 2018 class?