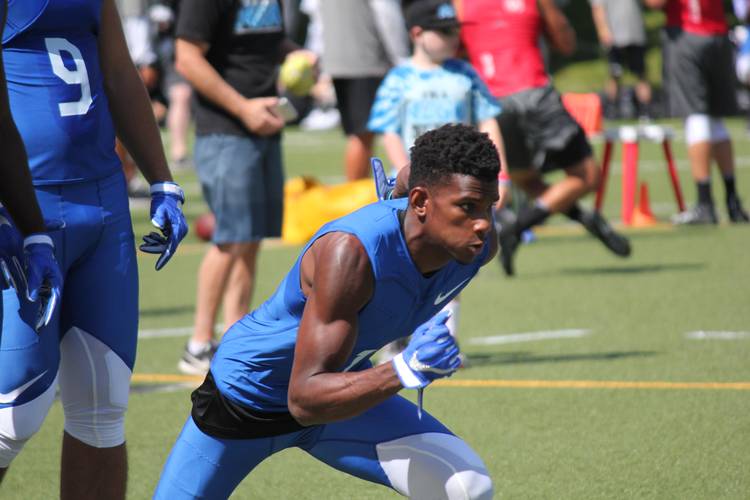 Joshua Moore down to five

Yoakum wide receiver Josh Moore has collected more than 50 offers. The 6-1 wide receiver narrowed his list down on Jan. 19 to include a top 5 of Texas, Ole Miss, Tennessee, Florida State and Oregon. The one-time Nebraska commit is scheduled to announce on Feb. 7, national signing day.

Moore, a Fabulous 55 member, is an alumnus of The Opening Final and played in the Under Armour All-America Game in Orlando on Jan. 4. He was joined at the game by eight future Longhorns and he was a priority target for the UT recruits in attendance.

“We’re working on Josh,” Al’vonte Woodard said that week in Orlando. “He’s one of the guys we need to join us to complete the class. He’s a great wide receiver and he’s known most of us future Texas players for a few years.”

Moore helped lead Yoakum to a state title game as a junior. He then transferred to IMG Academy for the spring semester before returning to Yoakum to finish out his senior season. The 4-star didn’t spend much time at IMG, but he valued the experience.

“IMG was great for me because it is a litmus test,” Moore said. “You line up against the best players each day and that gives you an idea of where you’re at and what you need to improve. It also shows you what a college class schedule and workload will be like and what it’s like to be on your own. I enjoyed it there.”

Moore de-committed from Nebraska on Dec. 10. Texas receivers coach Drew Mehringer was at his practice the next day. Once Texas officially lost Kentucky’s Rondale Moore to Purdue before the early signing period, the Longhorns placed the focus of filling the void at slot receiver on Josh.

Texas hosted Moore on an official visit last weekend. He’s scheduled to visit Florida State this weekend and Oregon on Feb. 2 before making his official announcement on Feb. 7. Texas is currently in the lead, but Florida State and Oregon will have the final shot to impress the wide receiver.

Moore isn’t the only prospect in his household. His twin brother, Jordan, also is a member of the Fabulous 55. The 4-star safety prospect is committed to Texas A&M, a school not mentioned by Josh in his top 5.

“People always thought my brother and I would end up at the same school, but that was never true,” Moore said in Orlando. “We each need to do what is best for us and go to the school that will prepare us for life and hopefully the next level of football. That place might not be the same for us.”

“I’m proud of the legacy my class left at Yoakum. We did a lot of great things that we’ll remember for the rest of our life,” he said. “It’s time to focus my attention to the next chapter of my life and decide which college is the best spot for me.”

It’s hard to read Moore, and with two official visits remaining, it’s not impossible for him to swing back and forth a few times before picking a school. The recruiting process is tough and he’s struggled with his decision for months now.

Texas is trending positively following a successful official visit. The Longhorns hope Florida State or Oregon don’t wow the receiver on official visits before his decision date. Tom Herman’s program leads right now, but that could easily change in the next two weeks. Texas is still chasing other receivers like Lawrence Keys III, Tommy Bush and Texas A&M commit Jalen Preston, who is set to take an official visit to Texas before signing day.

No. 6 Texas, No. 3 Baylor square off in what may be women’s college basketball’s best rivalry