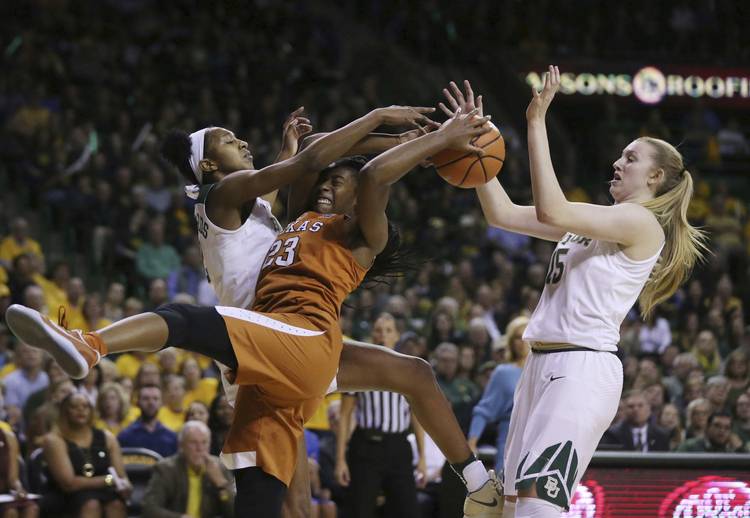 Wallace, a senior, played the game of her life, scoring a career-high 27 points as No. 3-ranked Baylor toasted sixth-ranked Texas 81-56 at the Ferrell Center.

The Lady Bears’ statement victory could be heard from Waco to the ears of the NCAA Tournament panel that picked Baylor as a No. 3 seed in its first “reveal” seedings of the tournament last week.

Considering the magnitude of the game — two top-10 teams playing for Big 12 supremacy on national television — the loss was a real jolt for the Longhorns, who nearly knocked off top-ranked UConn just 10 days ago.

“It was an old-fashioned butt-kicking,” Texas coach Karen Aston said.

This hardly looked like the Texas team that earned an 85-79 victory over the Lady Bears in Waco last year — which was the Longhorns’ first win over Baylor since 2010.

In that game, Ariel Atkins, Brooke McCarty and Joyner Holmes combined for 60 points. On Thursday, that trio combined for 30 points on 9-for-35 shooting.

Baylor has beaten Texas in 16 of their last 17 matchups, including two times in the Big 12 tournament.

“It’s frustrating when you don’t show up,” Atkins said. “We got beat. They outworked us, had more energy, played with passion. They were a team, we weren’t.”

Baylor’s domination of the paint was expected. Kalani Brown and Lauren Cox had 17 points apiece and they combined for 21 rebounds. The biggest surprise was Wallace, who connected on 11 of 16 shots from the field, including a pair of three-pointers that received roars from a crowd of 9,286.

Brown, who leads the nation in field goal percentage (70.5), has scored 76 points and 30 rebounds in her last three games against Texas.

“I love a good rivalry,” the 6-7 junior said. “Texas is a very good team and they always bring high intensity. I love that about them. It’s up to us to match it.”

On the night Baylor honored Chameka Scott, a member of Baylor’s national championship team who died Sunday from cancer, the Lady Bears played inspired basketball. Behind Wallace and Brown, the Bears bolted to a 44-27 lead at the half.

While Brown and Wallace helped Baylor shoot 54 percent from the field in the opening half, Texas countered with four combined air balls from senior guards McCarty and Atkins. McCarty was 0 for 8 from the field until she hit a 10-foot floater from the left baseline at the buzzer to end the first half.

Baylor has eight Big 12 championships and looks unstoppable in its quest for No. 9. The gold-clad Baylor fans were whipped into a frenzy with every Lady Bears bucket and every Texas shot that missed its mark.

Texas was supposed to have a matchup edge at guard, but Wallace outscored McCarty and Atkins 14-11 in the first two quarters. McCarty finished with a team-high 16 points while shooting 5 for 19 from the field.

Baylor won the rebounding battle 50-34. It was just the second time this year the Longhorns, who rank No. 2 nationally in rebounding margin, had fewer boards than their opponents.

“We have to move on to the next game,” said Texas guard Lashann Higgs, who scored 13 points. “Tonight, Baylor wanted it more. You can’t dwell on it.”

Texas History: He may not be in THE hall, but Roger Clemens had no problem getting honors at Texas

The Dotted Line: What would it mean for Texas to sign Katy defensive tackle Moro Ojomo?