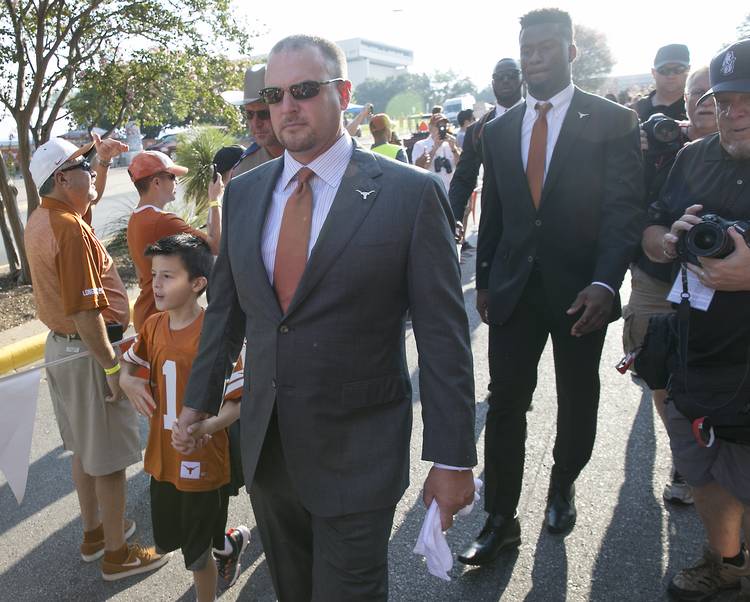 Texas in play for Moro Ojomo

The Longhorns are spending most of their time in January filling the defensive line after not signing a single player at defensive end or tackle during the early signing period in December. Texas still holds a commitment from 4-star defensive tackle Keondre Coburn from Spring Westfield and has added two 3-star defensive ends from out-of-state.

To complete the class, Texas needs another defensive tackle. The focus shifted to Katy 3-star Moro Ojomo in December. The Longhorns offered him on Dec. 6. The 6-3, 280-pound senior was a relative unknown in elite recruiting circles before the UT offer. Since then, he’s added offers from programs like Notre Dame, Oklahoma, Texas A&M and Oregon.

He was named the District 19-6A defensive MVP as a senior after finishing as a second-team all-district performer as a junior. Ojomo will take an official visit to Texas this weekend and then one to Oregon before national signing day. He’s also taken visits to Notre Dame and Oklahoma in January. His announcement day is not yet scheduled.

“Moro was a fantastic player for us as a junior, but he really stepped up and improved in his final year for us,” said Katy head football coach Gary Joseph after the Tigers fell to Lake Travis in the playoffs. “He’s not just a big guy in the middle. He can move around and he’s young for a senior.”

Ojomo won’t turn 18 until after he enrolls in college, meaning he’s probably not finished growing. The prospect of nabbing a player with that much room to grow at tackle is rare. Adding him with Coburn would give Texas a duo of elite defensive tackles with different skill sets.

As of right now, Ojomo is best suited to play three-technique or as a defensive end in an odd-man front like in Texas defensive coordinator’s Todd Orlando’s scheme. He can play Chris Nelson’s position with Coburn pegged to play nose tackle like Poona Ford.

The impact of signing Ojomo

The Longhorns will sign a top five class regardless of how Tom Herman’s group ends the 2018 cycle. It will be Texas’ highest-rated class since the 2012 group that included Aledo running back Johnathan Gray and Brenham defensive tackle Malcom Brown. The early signing period locked in 19 prospects to the class; nine already are enrolled on campus.

Everything else is icing on a cake now that Texas has gained commitments from defensive ends Daniel Carson and Michael Williams.

Extremely grateful to receive a scholarship from The University Of Texas #RevolUTion18 🤘🏿 pic.twitter.com/evMYYos1ve

The biggest concern for Texas after the early signing period was defensive line. Coburn, Texas’ lone defensive line commit at the time, chose not to sign, causing fear throughout the Longhorns fan base. He has visited with other schools and hosted coaches at his house but remains committed to UT; all signs point to him signing with the Longhorns on Feb. 7.

A commitment from Ojomo would put an exclamation point on the class, especially if the Longhorns can also add 4-star defensive end Joseph Ossai from Conroe Oak Ridge. The duo would give Texas two of the best defensive linemen remaining in the 2018 class while proving Herman’s stranglehold on the Houston-area remains intact.

The Longhorns could go from signing zero defensive linemen in December to ending up with five on signing day, turning the main concern on the recruiting trail into a complete success. Ojomo would also represent a clear recruiting victory over Oklahoma and Texas A&M.

The importance of an official visit

Texas can roll out the burnt orange carpet for Ojomo during his official visit. Texas needs interior linemen after losing Ford and others. Playing time is available for prospects prepared as freshmen and the Longhorns will sell Ojomo hard on that idea.

The Longhorns also hold the advantage of offering Ojomo before the other programs in consideration. Texas can say it believed in his abilities before the competition, and loyalty tends to play well with teenagers in the recruiting landscape.

Oregon is scheduled to get Ojomo’s last official visit and make the final impression, which is an advantage. Texas will likely use distance and home-state pride to recruit against programs like Oregon and even Oklahoma. The goal for the Longhorns is to make Ojomo feel like he doesn’t need to take the Oregon visit after an official in Austin.