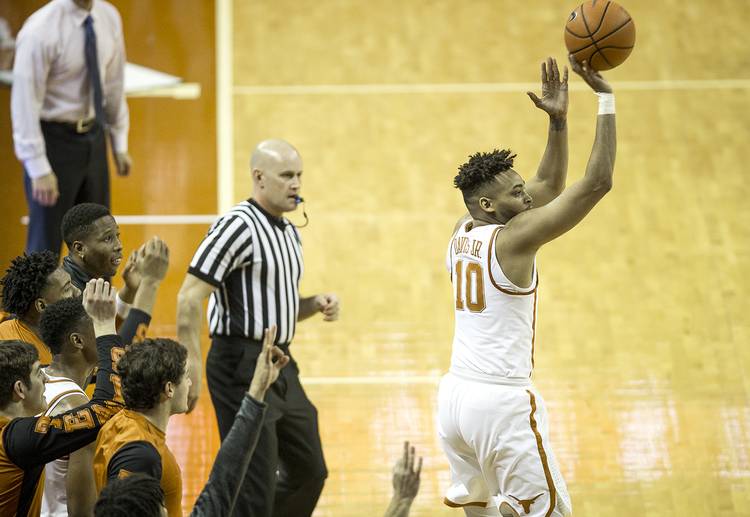 The Texas men’s team had a player’s-only dinner Thursday night at Pappasito’s Cantina. The coaching staff did not go disguised as waiters, and coach Shaka Smart probably can’t play an oversized guitar and sing “Guantanamera.”

The Longhorns themselves had plenty to discuss. Texas is 3-3 without guard Andrew Jones, and the games have zigzagged between wins and losses.

“Coach said we can’t win-lose-win-lose in the tournament. You’ve got to win-win-win,” guard Eric Davis Jr. said. “I use that as motivation. He’s right. Let’s go on a win streak.”

An extremely tight-knit locker room had to absorb the tremendous, emotional body blow that Andrew Jones has leukemia. Alas, the season continues. Simply from a basketball perspective, losing Jones has been equally disruptive.

The Horns’ shot and scoring averages are down while their opponents’ averages are up. Their turnover and steal numbers are slightly off kilter. In the good-news department, UT’s free-throw shooting has improved — with a hat tip to Kerwin Roach II.

Some analytical projections have Texas going 8-10 or 9-9 in league play. Sites like KenPom.com project UT will win its remaining Big 12 home games and lose on the road. It could say the same thing about most other Big 12 teams, too.

“I think our main motivation is Andrew,” freshman Jase Febres said. “We’ll put his jersey on the bench with us, and we see that motivation. Our connection is really, really tight. I think when we play for him and play for each other, that’s when things go well.”

Jones was averaging 13.5 points in 10 games this season. He missed four with a fractured wrist injury before the medical diagnosis. The team’s second-best scorer averaged nine shots per game in 13.5 minutes.

Take Jones out of the mix, and who’s now taking his shots? It’s been a by-committee approach, but generally, the totals are down. Texas averaged 59.8 shots per game in the season’s first 14 games and 55.8 in the last six. As a result, the average scoring has dipped from 73.3 points to 69.

Take away a shooter hitting 46.3 percent of his 3-pointers and the numbers should be down.

“It’s not really as simple as saying, OK, if Andrew shot 11 times a game, two will go to this guy, three will go to that guy,” Smart said. “It depends on how you’re being guarded.”

Smart said the easiest way for his team to get more shots and points is to score in transition. That’s what he’s been stressing to point guard Matt Coleman. “The No. 1 answer is getting out and running more,” Smart said.

Texas has averaged just 3.3 points in transition over the last six games. This newly assembled group cannot score off the break. For comparison, TCU and Texas Tech both had zero fast-break points while Oklahoma State (11 points) and Iowa State (12) were in double figures.

The guards need to get the ball to their consistent scorers — Mo Bamba and Dylan Osetkowski. The two big men have combined for 25.7 points the last six games. And they’ve taken the most shots over the last six games, too.

It’s a two-way street, though.

“I would actually contend that on the list of people that are responsible for Mo getting the ball or getting shots, Mo’s No. 1,” Smart said. “In the games where Mo’s gotten more shots, it’s because he’s been more aggressive. He’s been more assertive.”

“A lot of us, including myself, are looking in the mirror and saying, ‘Hey, your team needs you. Texas needs you,’” Davis said.

Outside of Bamba and Osetkowski, there’s not another player that can guarantee Smart a double-digit performance night in and night out. The game’s ebbs and flows are too unpredictable, and so is this team’s shooting.

But Texas is a team with a collective, awe-inspiring mission. These Longhorns simply do not want to let Jones down.

It’s like when Febres went off for 18 points against Baylor, the first game after Jones’ diagnosis. “I knew I had to step in and add some scoring,” he said. “Me being a freshman, at first I wasn’t playing too much. I didn’t feel too much pressure, honestly. I was doing this for one person, and that was Andrew.”

The Horns are still on track for the NCAA Tournament. But without Jones, they have a slim margin for error. The players who remain must generate their own momentum, and that happens by winning games in consecutive fashion.

“We’re in a position where we can go do some great things in the last 11 games,” Smart said.

Texas’ Kody Clemens looks forward to his return to third base, father’s Hall of Fame induction