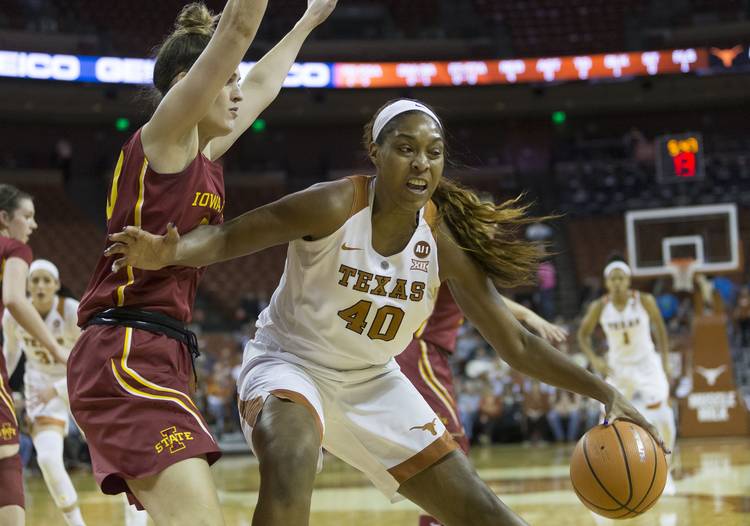 Karen Aston glimpsed at the stat sheet and could not find many flaws.

Ariel Atkins scored a game-high 15 points to lead six Longhorns in double figures. Joyner Holmes had her first double-double of the season. Texas dominated the boards 40-27. The Horns shot 54 percent from the field.

It all added up to an 87-55 victory over Iowa State in a Big 12 women’s basketball game Saturday night at the Erwin Center.

For at least a night, the 25-point loss to Baylor on Thursday was truly in their past.

“We were really good tonight in a lot of ways,” Aston continued.  “Our focus was good. If we made mistakes, we corrected them. Our attention to detail was really good.”

Texas had a made-for-TV stretch of near-perfect basketball when the Longhorns had a 25-1 scoring run during an seven-minute stretch in the second and third quarters.

With Holmes, Jatarie White and Audrey-Ann Caron-Goudreau dominating the paint, the Longhorns went on an 11-1 scoring run in the final four minutes of the second quarter to earn a 39-30 lead at halftime. Brooke McCarty capped a 14-0 scoring run with a long three-pointer — her only field goal of the night — with 6:55 to play to extend the lead to 53-30.

“When you play teams like Baylor or Texas, you have to avoid the knockout punch,” Iowa State coach Bill Fennelly said.

Unfortunately for his Cyclones, they were beaten by TKO during that seven-minute sequence. Coming off a 39-point effort in Wednesday’s 78-69 victory at Oklahoma State, Cyclone junior guard Bridget Carleton scored 19 points against Texas on 7-for-16 shooting from the field.

The 32-point difference was UT’s largest margin of victory over the Cyclones in the 33 games between the teams.

Aston and Caron-Goudreau said Texas was fortunate to play Iowa State just two days after the 81-56 loss to Baylor in Waco.

“We didn’t have any time to cry at night for feel sorry for ourselves,” said Caron-Goudreau, who contributed 12 points.

Aston said the defense played well on defense after a “passive” first quarter. ISU guard Emily Durr scored a game-high 20 points but the Cyclones were limited to 35.8 shooting from the floor.

The coach substituted players consistently in the second half and received solid contributions throughout the lineup. Lashann Higgs continues to shine in her junior season, finishing with 14 points and a game-high 4 assists. Sug Sutton came off the bench to score 11 points, 7 in the first half. In 25  minutes, Atkins was 6-for-8 from the field.

The most promising note from Saturday’s victory was Holmes. The 6-4 forward resembled the player who was the Big 12 Freshman of the Year last season, contributing 12 points and 11 rebounds. It was her best game since coming off a 10-game suspension to start the season.

Is there enough time for Holmes to regain the talent that made her an All-Big 12 first team player as a freshman?

“There’s a lot of time if we’re going to try to play in April,” Aston said. “It’s not even February yet.”

The Final Four is March 30 and April 1 in Columbus, Ohio.