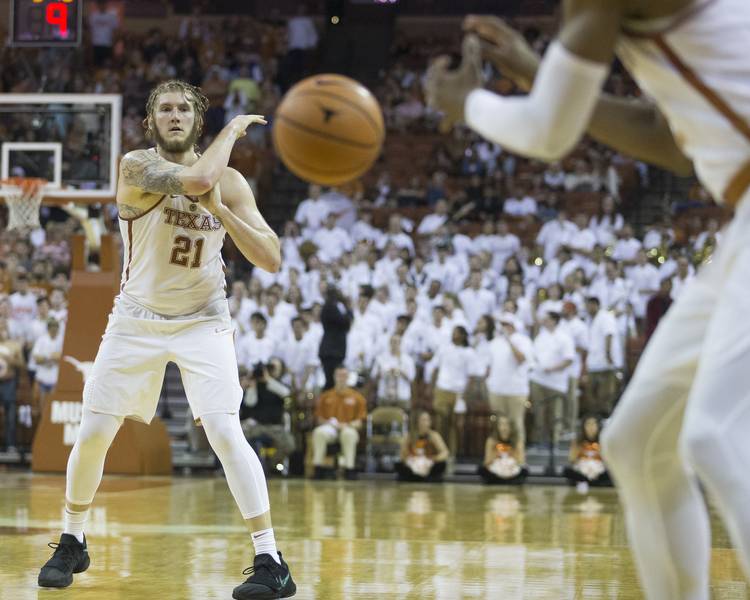 Creativity was displayed everywhere Saturday on the campus where breakthrough advances supposedly change the world.

On the court, Texas junior Dylan Osetkowski unveiled a new braided hairstyle that drew commentary from all sides. Let’s get this out of the way now. Asked if he’s keeping it, Osetkowski said: “Yes. I just wanted to change it up.

“I knew whether I played good or bad, it wouldn’t have been the hair,” he said.

Even Texas coach Shaka Smart unveiled some creative wrinkles against Ole Miss. Enough with the plodding, half-court offense. Smart dialed up the defensive pressure — his bread-and-butter stuff — and the result was a fun 85-72 win at the Erwin Center.

For the second straight game, Mo Bamba had a career high with 25 points, and he also had 15 rebounds. He was a stout 12-for-13 at the free-throw line, too. Kerwin Roach II continued his sizzling stretch, tallying 16 points with five assists.

Smart said Osetkowski was in the “D.O. zone,” a specific place where the junior has a certain look and mindset. After getting 17 points, seven rebounds and five assists, Osetkowski can do whatever he wants with his ’do.

“I love Dylan doing what he wants to do,” Smart said. “Be you, man. If someone’s got a problem with that, forget ’em.”

The Longhorns (14-7, 4-4 Big 12) have been struggling to score since losing guard Andrew Jones. But they got points in transition, 14 off second chances and 10 3-pointers, many coming off an extra pass or two. It was the most points UT has scored in regulation since hanging 86 on Kansas on Dec. 29.

Matt Coleman’s contributions will get overlooked. The point guard had only two points, but his five assists were big as this team’s floor general.

Jase Febres came alive for four 3-pointers. Eric Davis Jr. hit three more. The Horns’ 10 3-pointers were their most since that overtime win at Iowa State on Jan. 1.

“Scoring 85 points is always fun,” Bamba said. “But one thing I kept saying in the huddle was pace, pace, pace, pace. We had to keep the same pace. Normally when we get down to the 4- to 5-minute mark, we slow down for no reason. We’re not scoring as much. But keep running. We’re a very talented, athletic team.

“We just keep running. Matt kind of relayed that message to the team,” Bamba added, “and he’s the head honcho.”

It all leads to a simple question: Can the Longhorns do this in 10 more games? Texas will start the second half of the Big 12 season Wednesday at Texas Tech, which knocked off South Carolina on Saturday as part of the Big 12/SEC Challenge.

It’s not as simple as Smart ordering his players to use a full-court press. Most times, the press needs to be set up after made baskets or dead-ball situations. It’s hard to keep a frenetic pace for 25, 30 or 35 minutes, much less 40.

Against Ole Miss, Davis almost dove into the ESPN broadcasters’ laps, Osetkowski slid halfway through Travis County, and Roach bumped one Rebel practically into the third row. Ole Miss (11-10, 4-4 SEC) ended up shooting 39.1 percent, five points below its norm, and went 8 for 21 from 3-point range.

“It’s fun to get up and down, especially when it’s working,” Osetkowski said. “It’s tiring, but it’s a fun way to play. I think it’s about staying aggressive, not getting complacent or not backing off if we want to stay in the press. We’ve just got to continue to stay aggressive.”

Smart was clear that it’s a game-to-game situation. It’s all based on matchups. The pressing, harassing style that worked against Ole Miss might not work against Tech or even next weekend’s foe, Oklahoma.

But the level of aggression can always be the same. Bamba said he deserved a flagrant-1 foul for shoving Marcanvis Hymon. “I thought the intentional foul was very necessary,” Bamba said. “But I thought that actually set the tone. You’re not going to punk me.”

And it’s hard to punk the Longhorns when they play with the hard-charging style and defensive creativity shown Saturday.

“I like playing that way. I like extending the floor. I like running. I like scoring 85 points like we did today,” Smart said. “I don’t like scoring 60 points. But I thought our guys played with a good freedom about them that we obviously need to take with us on the road and need to carry over in Big 12 games.”

Texas’ Kody Clemens looks forward to his return to third base, father’s Hall of Fame induction