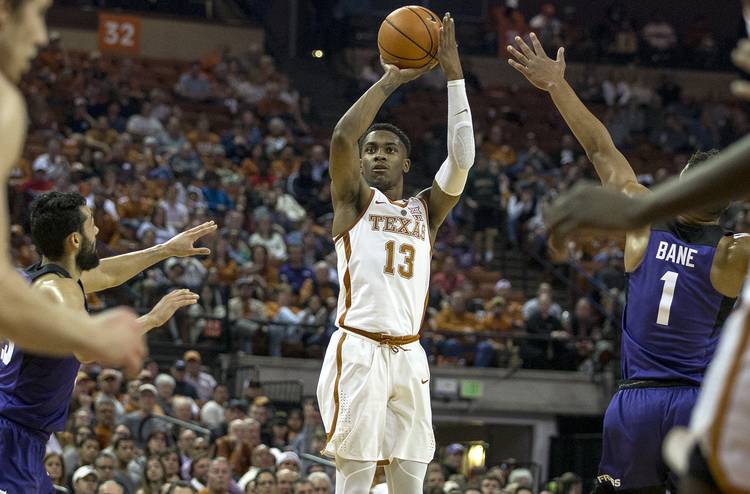 “You get frustrated during practice. ‘Why is he always on me?’” Febres said. “But afterward I look at it like, OK, he wants me to be great.”

Febres got sporadic playing time in November and December, so he wasn’t on many teams’ scouting reports when Big 12 play began. Then he went off for 18 points in the first half against Baylor and made four 3-pointers. At one point, Bears coach Scott Drew was screaming at his players to defend the red-hot freshman.

When it was over, the uber-confident Febres shrugged it off. “Honestly, it doesn’t really matter. We didn’t get the win. So I’m not satisfied with anything,” he said.

On Wednesday, Texas (14-7, 4-4 Big 12) embarks on the second-half of Big 12 play at 10th-ranked Texas Tech. Febres can no longer play the role of doe-eyed newcomer. The Longhorns need him to provide an outside scoring presence, especially as teams re-calibrate the defensive setups on Mo Bamba inside.

Perhaps last Saturday’s showing against Ole Miss was a sign of better things to come. Febres hit four 3-pointers, all coming in smooth fashion off the wings, as he tallied up 12 points in an 85-72 win.

“I’ve been on him about you’ve got to be more assertive and aggressive on the court,” Smart said afterward. “You’ve got to demonstrate to all those around you that you have a passion for this game and you want.”

Texas still has the worst 3-point shooting totals in the Big 12. The Longhorns are sitting at 30.6 percent, which is actually an improvement from where it was. UT’s guards have been shooting it better the last few weeks, forcing defenders to think about going away from double-teaming Bamba.

If the Horns can just shoot marginally better from long range in February, their odds of winning could increase exponentially. That’s where Febres can help. This is the same athlete who once hit 20 out of 31 3-point shots during a summer AAU event. It’s one of the sole reasons why the Horns wanted him.

Bamba is averaging 13.1 points per game while shooting about 55 percent. Defenders have been quick to double-team him, forcing Bamba to throw the ball back out. Opponents will gladly let UT’s guards fire from deep and take their chances.

Bamba is 3 for 3 from downtown in the last two games. “Some of you owe him an apology,” Smart said. Perhaps so, but Bamba won’t get paid to rain 3-pointers until next season in places like Orlando, Sacramento or Atlanta.

For now, Bamba has to make his way wrestling the maulers in the Big 12. “We all know that Mo’s not going to be confused with Arnold Schwarzenegger,” Smart said with a laugh. “But Mo is stronger than he looks, and he’s not going to back down.”

Neither should the guards. In UT’s 67-58 win over Tech on Jan. 17, the Longhorns made only six 3-pointers as Bamba piled up 15 points and 11 rebounds. Roach had 20 points and five boards. Texas went right at Tech, drew fouls and went 15 of 21 at the free throw line.

The Red Raiders (17-4, 5-3) have rebounded since. Tech knocked off Oklahoma State and then beat South Carolina in the Big 12/SEC Challenge.

Every team will present different looks in the second half of the Big 12’s round-robin schedule. Texas should be no different.

“This Big 12 race, wherever you are in the standings, it is a marathon,” Smart said. “There’s a lot of twists and turns.”