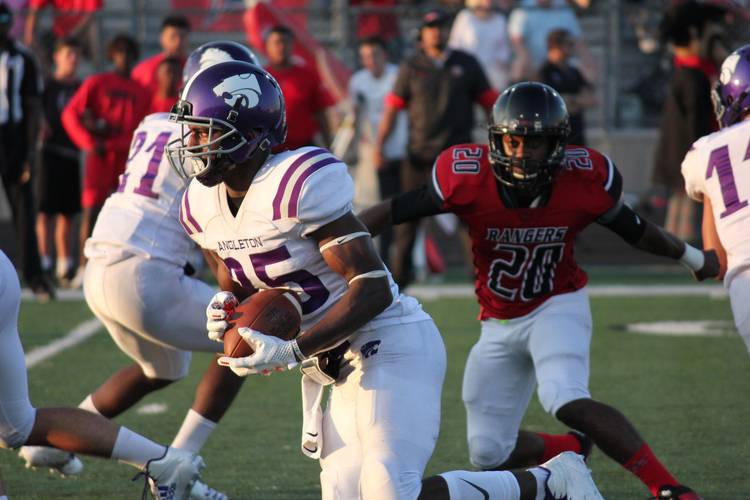 Texas signee BJ Foster is the No. 1 player on the Fabulous 55. (Mike Craven)

A year removed from not signing a single top 10 player in the state of Texas, the Longhorns inked the top five players in the state during the inaugural early signing period on Dec. 20. Texas ran the state, at least for a year, on the recruiting trail.

The ringleader was Angleton’s BJ Foster. The 5-star safety earned the designation of top player in the state after missing the final half of his junior season to injury. Foster, who played mostly running back in high school, rallied together a group of elite Houston-area prospects following Texas’ junior day.

Foster is a two-time participant of The Opening Final and played safety at the Under Armour All-America Game in Orlando on Jan. 4. In that game, he proved his combination of size and athleticism would transfer to the safety position. He caused a fumble on the opening drive and applied big hits throughout.

The No. 2-ranked player on the Fabulous 55 was recently awarded 5-star status on the 247Sports Composite ratings. Caden Sterns, a safety from Cibolo Steele, earned MVP honors at the U.S. Army All-American Bowl in San Antonio on Jan. 6 after recording two interceptions. He led his team to the Class 6A Division I state title game as a junior.

DeMarvion Overshown, another safety who signed with Texas, checks in at No. 3. The Arp product is from a small town but packs a big punch. Considered the hardest-hitting safety in the 2018 class, the 6-4, 220-pound 4-star prospect could play safety or outside linebacker in college.

Cornerbacks Jalen Green and Anthony Cook round out the top five. Both signed to Texas during the early signing period. Green, Foster and Sterns enrolled early. Cook was the No. 1-ranked player on the initial Fab 55 of the 2018. Green took the top spot in the update before the football season began.

Wide receiver Brennan Eagles, another early enrollee, and defensive tackle commit Keondre Coburn also made the top 10. Eagles is one of three wide receivers to rank in the top 10. Coburn is the top-rated defensive lineman in the state. He remains committed to Texas despite not signing early.

Quarterback Sam Ehlinger was the highest-ranked UT signee in the 2017 class. The former Westlake quarterback was ranked No. 14 on the final 2017 list. Running back Toneil Carter (No. 20) and wide receiver Damion Miller (No. 24) were the only other Longhorns to crack the top 25, and Miller never made it campus.

The 2018 class is in sharp contrast. Every in-state commitment for the Longhorns in the cycle, except for kicker Cameron Dicker, is represented on the final Fab 55. Fourteen future Longhorns made the list and Texas is still in the running for defensive end Joseph Ossai (No. 16) and wide receivers Joshua Moore (No. 25) and Tommy Bush (No. 31).

If Coburn and Carthage running back Keaontay Ingram (No. 13) sign, it would give Texas nine commitments among the top 14 players, where Ehlinger was ranked on the 2017 list. Ingram didn’t sign early because his high school team was competing for a second consecutive Class 4A Division I title that same week.

Texas A&M is second on the list with seven commitments and the Aggies could potentially add more before signing day. Oklahoma has four commitments on the list, while Baylor has three. Nine of the 55 prospects on the list remain uncommitted at press time.

Texas’ 2018 recruiting class currently ranks third in the nation and first in the Big 12. It will be the best finish for the Longhorns in recruiting since 2012.