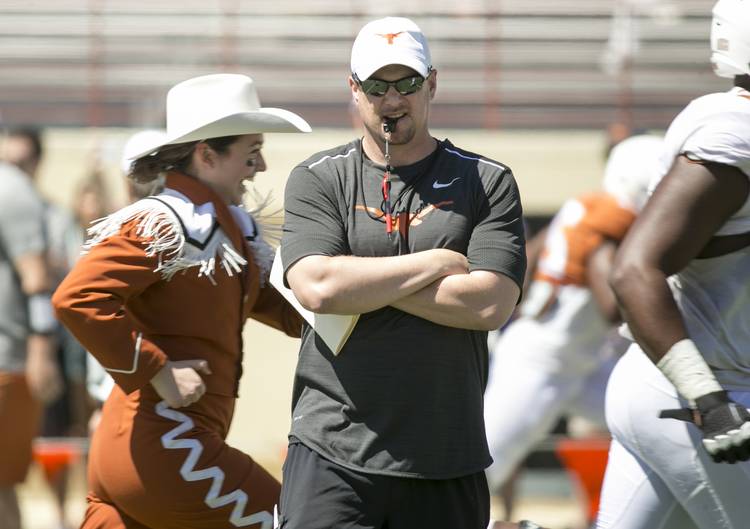 Texas’ 2018 recruiting class will be finalized on Feb. 7 when all eligible prospects who didn’t utilize the early signing period sign national letters of intent. The Longhorns locked in 19 players in December, including the top five players on the final Fabulous 55.

Texas’ recruiting class ranks third in the nation and first in the Big 12.

Texas’ best-case scenario involves keeping Coburn, the 4-star defensive tackle from Spring Westfield, and Ingram, the state’s top-rated running back from Carthage, committed. They were the only Longhorns commitments to not utilize the early signing period. Ingram cited his school’s scheduled state championship game that week as a reason, while Coburn admitted he wanted more time to make a final decision.

The Longhorns also are hunting for more targets on top of the defensive end commitments they picked up from Daniel Carson and Michael Williams, both 3-star prospects from out-of-state. Texas is leading for Yoakum wide receiver Joshua Moore, who’ll pick his college on Sunday. Adding Moore and Louisiana native Lawrence Keys III would give Texas an A+ at the wide receiver position in the 2018 class.

Texas also is in search for offensive linemen. The Longhorns want Rice grad transfer Calvin Anderson, who isn’t expected to decide until after signing day. The Longhorns also recently extended an offer to Houston Cypress Woods tackle Christian Jones, who is supposed to announce before signing day.

Conroe Oak Ridge’s Joseph Ossai is the top target left for the defensive staff and he’s set to pick between the Longhorns and Aggies on signing day. He’d give Texas another pass rusher in the class. The Longhorns also want Katy defensive tackle Moro Ojomo.

The best-case scenario for the Longhorns is signing their four current commits while adding Ossai, Moore, Ojomo and Jones before landing Anderson as a grad transfer in the spring. Keys would be icing on the cake.

Herman put his program in a position not to fail on the recruiting trail in the 2018 class. The early period helped erase some mystery surrounding national signing day because most P5 prospects, including 19 of the 21 that were committed to Texas in December, wanted to end the process and sign early. Nine of those signees enrolled early.

Texas still could end up disappointed, though. Moore and Ossai are both considered UT leans, but both are critical for Texas to round out those two respective position groups for this class. The Longhorns don’t have a slot receiver like Moore or an edge rusher like Ossai yet for 2018.

The worst-case scenario also includes Coburn or Ingram backing out late in favor of other schools. Texas has been all-in on Ingram in the cycle; losing him would mean the Longhorns wouldn’t add a single running back in the 2018 class. Coburn is the only defensive tackle committed and the best option to eventually replace Poona Ford at nose tackle.

There’s also a possibility, though a small one, that Texas could lose out on Ojomo or Jones. Keys is favored to pick Notre Dame and won’t be as big of a loss — if Moore commits to Texas.

Rethinking our 2013 Fabulous 55: Big misses, few hits — and where in the heck was Baker Mayfield?