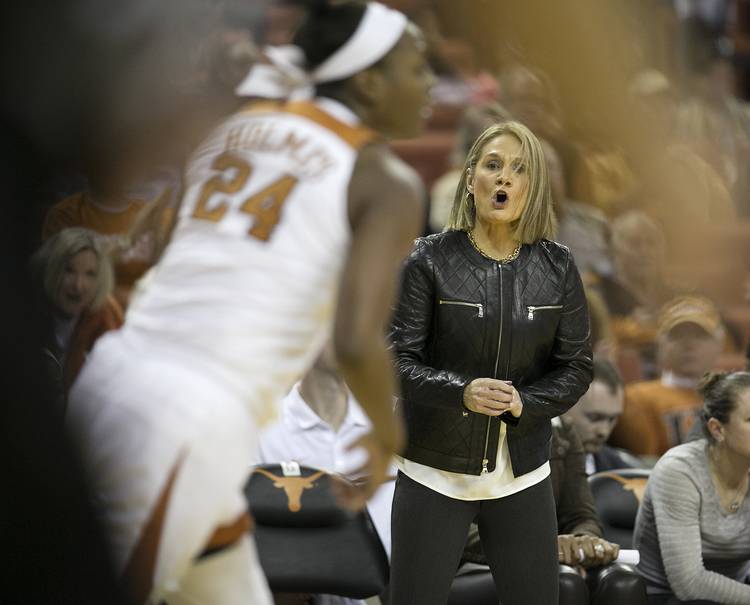 Texas head coach Karen Aston yells to Joyner Holmes during their game against OU during the first half of their game at the Frank Erwin Center on Tuesday, January 17, 2017. DEBORAH CANNON / AMERICAN-STATESMAN

Before the season is over, Karen Aston is going to make a change in Texas’ starting lineup.

Texas has played 21 games. Brooke McCarty, Ariel Atkins, Lashann Higgs and Audrey-Ann Caron-Goudreau have started every one. The lone exception is center Jatarie White, who has started 20 of them.

The most obvious reserve who could be elevated to the starting lineup is Joyner Holmes, last season’s Big 12 freshman of the year. After returning from a 10-game suspension in late December, the 6-4 sophomore forward has started to show glimpses of the player who was ranked by ESPN as the No. 2 player coming out of high school in 2016.

Holmes played in 32 of Texas’ 34 games last season, averaging 12 points and a team-high 8.2 rebounds. Aston said it’s “very possible” that Holmes will rejoin the starting five “because of her rebounding ability.”

In the 11 games since her return, Holmes has scored three or fewer points seven times. But when she delivered a 12-point, 11-rebound performance in an 87-55 victory over Iowa State last Saturday, questions began to build about her possible influence on the second half of the conference season.

“What has been significant for her is that she hasn’t been able to get her competitive juices flowing to the point where her motor is running all the time,” Aston said. The Texas coach said she’s more concerned about getting more players from her bench involved.

“I’d like to play a few more kids,” Aston said. “There was a time when we only had six or seven who were performing at the level we needed. That’s not my style, for sure, and it’s not what we need to do. So, I’m hoping more people will join the party and give us quality minutes.”

Holmes said after the win over Iowa State that she is “getting closer” to regaining her old form. “We need to take advantage of matchups when we can score in the paint,” she said.

That was not a problem against the Cyclones, a finesse team that relies on three-point shooting. Coach Bill Fennelly said the addition of Holmes to UT’s roster as post-season tournaments approach will help the Horns because of her physicality.

“There’s a little girl at home (in Iowa) who asked me, ‘Is LeBron playing?’” Fennelly said, referring to Holmes. “I’m a huge baseball guy and getting Joyner is like getting a new starting pitcher or a home run hitter to get ready for in the playoffs.”

Joyner has heard comparisons to LeBron James since she was a star at Cedar Hill. She usually responds by saying she pictures herself more of a Kobe Bryant-like player.

Aston hopes Holmes makes her presence felt in the paint, taking advantage of her strength to score in the low post and gobble up as many rebounds as possible.

Rethinking our 2013 Fabulous 55: Big misses, few hits — and where in the heck was Baker Mayfield?