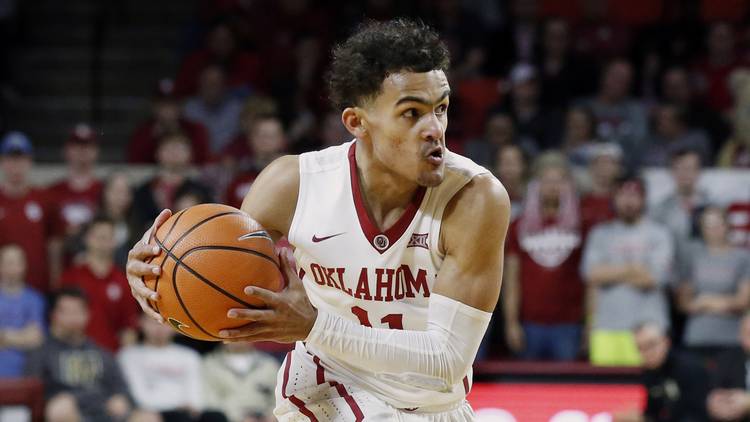 The disappointment over Wednesday night’s overtime loss at Texas Tech should have vanished the moment Texas’ team plane hit the tarmac in Austin.

Sure, the Longhorns could spend time kicking themselves over the heart-breaking loss. But now comes Saturday’s date with 12th-ranked Oklahoma and electric freshman Trae Young, the nation’s leader in points (30.3) and assists (9.5).

“He has no conscience,” Texas guard Kerwin Roach II said. “He’ll shoot it anywhere, anytime, no matter what.”

Texas (14-8, 4-5 Big 12) best be ready for its close-up. ESPN’s “College GameDay” broadcast crew will be at the Erwin Center for its 10 a.m. national broadcast. Admission is free. Doors open at 9 a.m., and everyone is encouraged to stay for the women’s game against TCU at noon.

Come 5:15 p.m., the Texas men better be locked and loaded for basketball’s Red River rivalry. The Sooners (16-5, 6-3) are the nation’s highest-scoring team, thanks to Young and his uncanny ability to find open teammates. The game is sold out.

RELATED: Preview: Texas vs. No. 12 Oklahoma

Saturday is effectively a day-long advertisement for Texas basketball. The school goosed things a little more on Friday by announcing more concrete plans for the new basketball arena.

UT President Gregory L. Fenves confirmed the school will build on campus — either on the parking lot south of Mike A. Myers Stadium or on the area where the School of Social Work sits, just south of Royal-Memorial Stadium. The second site also would engulf the Recreational Sports Center. The parking lot site has long been the internal favorite.

The arena will be smaller than the Erwin Center, which holds 16,540. A UT source confirmed the planned seating capacity is around 12,000.

“We have a unique opportunity to develop a world-class arena and training center for the men’s and women’s basketball teams that will help us recruit and support elite student-athletes, improve the fan experience and host games just a short walk away for our student fans,” Fenves said in a statement.

“Just as important, we are looking to do this at little cost to the university and no financial cost to the community,” he added.

UT officials also took the unusual step of publicizing documents meant for contractors. By unveiling their request for qualifications and proposal, Texas signaled the new arena is of major interest. According to the documents, the school projects it may cost $350-$450 million. A final builder could be chosen by September.

University administrators are fully backing Texas basketball. ESPN is here to showcase the Longhorns’ brand to the nation. Now it’s up to Smart and his team to produce.

And that’s where things get tricky.

Texas dug out of a 13-point hole against Texas Tech inside the revved-up United Supermarkets Arena. But costly missed free throws down the stretch left the door open. Tech’s Keenan Evans barged right on through, hitting enough free throws to force overtime. Then he drilled an 18-footer as time expired for the win.

Mo Bamba fought through a painful left knee injury. Dylan Osetkowski battled through a right ankle injury. Three players fouled out in regulation, and it was just a frustrating night all the way around.

“Obviously there are specific things you can say you’d do differently — make free throws, make layups, don’t foul,” Osetkowski said. “But at the end of the day, regardless of how we feel, we’ve got another opportunity against the 12th-ranked team in the nation. That’s our focus right now.”

Maybe Smart needs to fire up the troops again, like he did before Texas-OU two years ago. Smart went outside to the throng of UT students waiting to get in and let out an uncharacteristic “OU sucks.” Texas closed the game on an equally uncharacteristic 22-0 run, turning a close battle into a runaway win.

“When I did that …,” Smart recalled Thursday with a laugh. He simply shook his head. “Coach (Mack) Brown had put that in my mind, because he always says it. But it’s not like me at all. It worked that day.”

Anything goes in this rivalry. Except this time, the Sooners are bringing Young.

The Joyner Holmes Effect: Texas’ starting lineup may need an update before end of season