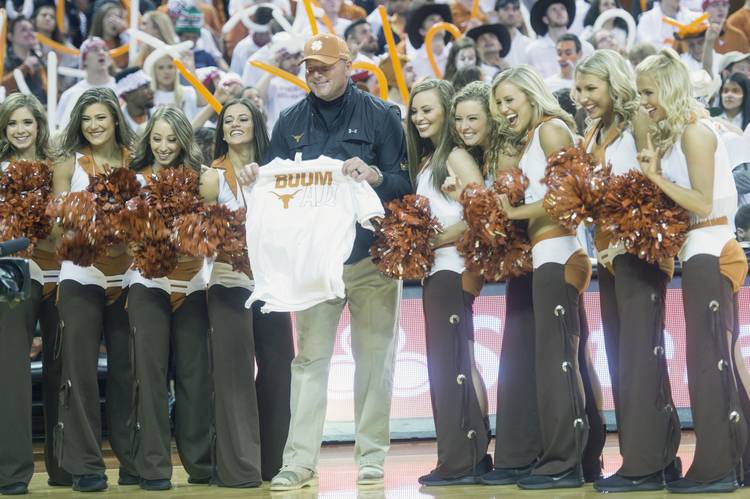 Scattered raindrops couldn’t dampen the excitement outside the Erwin Center on Saturday.

Hundreds of Texas students were eager to get inside for ESPN’s “College GameDay.” Six even slept outside overnight. Football representatives Charles Omenihu and Michael Huff walked around passing out Krispy Kreme doughnuts, and athletic director Chris Del Conte held coffee and court with fans.

Another stopped to shake Del Conte’s hand, and the AD said, “Get your butt in there and cheer!”

About 3,000 Texas fans — far more than even ESPN officials thought would show up — were rowdy and loud during the hourlong national broadcast. It was a rare chance for fans to show their appreciation for Mo Bamba and the Longhorns while also supporting Andrew Jones, who is battling leukemia.

“This fan base is incredible,” ESPN announcer Jay Williams said. “I know we were worried about whether Texas fans were going to show up. This is pretty amazing. This is bigger than some crowds we’ve had before.”

Walk-on Joe Schwartz was amazed at the scene. Boxes of doughnuts were stacked high along with unlimited coffee and breakfast tacos. The entire UT baseball team signed autographs on the concourse level. Fans gladly wore basketball nets fashioned as hats.  More football players would’ve attended, but the team had a previously scheduled event with the Texas Special Olympics.

As with all “GameDay” broadcasts, there were crazy signs galore. “I only love my bed and Mo Bamba. I’m sorry,” one said. Another said, “Snoop there is,” a hat-tip to Kerwin Roach II. And several ripped on OU’s superstar freshman — “Trae Young bought Bitcoin at $19,000.” It was the first time ESPN had brought its pregame basketball show to Austin since the 2008-09 season.

When asked if this kind of turnout would resonate with the basketball team, Schwartz said, “Yes, we do need it.”

“I think at this halfway point when guys might not be fully engaged, their bodies might be tired, but seeing that Texas fans are locked into our team and still have our backs, it’s really motivating,” Schwartz said.

Del Conte took the ESPN crew to dinner Friday night and promised that UT fans would respond, and they did. Every fan through the door was given a “Boom AJ1” shirt, just like the ones players wear in pregame warmups.

The “GameDay” broadcast featured an emotional update on Jones, as told in Tom Rinaldi’s signature style. At the end of the broadcast, Williams picked Texas to beat Oklahoma on Saturday afternoon by opening his dress shirt and showing Jones’ No. 1 Texas jersey.

In a statement released by UT, Jones’ family said the 20-year-old was moved to UT MD Anderson Cancer Center on Jan. 19. “He is receiving the best possible care and taking the next steps in his recovery,” the statement said.

“We do want everyone to know that in the last two weeks, Andrew has made some positive strides,” the family said. “He’s even been able to get out of bed and move around some, which is a huge difference from when he was first diagnosed in Austin.”

The family acknowledged there is “a long battle ahead, but together we will win this fight.”

The NCAA-approved fundraiser established for Jones and his family is now up to more than $156,000. Schwartz said he had 5,000 AJ1 wristbands in his car and 3,000 more in his apartment that will be distributed soon. It was a joint purchase by the Texas Cowboys and the UT Interfraternity Council.

“They’re a team that’s really come together because of this,” Omenihu said. “Battling cancer is like the game. You’re going to have ups and downs. If you take it like that, It’s just more motivation and drive. I think these guys have come tougher for the cause.”

The whole morning was an energy boost for the men’s basketball program and the athletic department as a whole.

“It’s why I’m active on social media, why you’re out there in front of people and why you’re trying to get in front of as many people as you can and show up to things at 7 o’clock in the morning,” Del Conte said. “If you’re asking them to be there, you better be there.

“It’s one event at a time, and today is a great day for us, the first day, to start celebrating Texas.”

On offense and defense, Atkins powers Texas to blowout victory over TCU