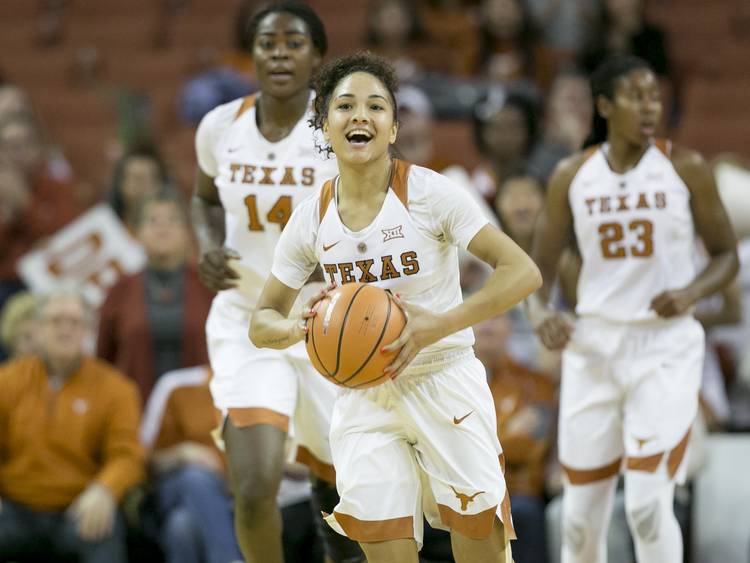 Ariel Atkins has a few more goals to attain before she crosses the finish line to a successful college basketball career at Texas.

During a 92-65 victory over TCU Saturday afternoon, Atkins’ DNA was found all over the stat sheet. She scored 16 points, grabbed six rebounds and had three assists in the Big 12 contest. Her value, though, stretched far beyond those numbers.

Coach Karen Aston spoke about the team’s “energy level and enthusiasm.”  No one brought those intangibles to the court more than Atkins, who said “it’s sad to talk about” her time with the Longhorns soon coming to an end.

“I feel it’s my obligation to give it everything I’ve got,” the 5-foot-11 shooting guard from Duncanville said. “It’s my job to be an energy player for this team.”

TCU coach Raegan Pebley said blowout games in the Big 12 happen at any time, reminding reporters that Texas recently suffered an 81-56 setback at Baylor. “A game can get out of reach pretty quickly,” she said.

Pebley gave special credit to Atkins for playing hard on both ends of the court.

“Ariel Atkins is a young Alana Beard,” said Pebley, referring to the Los Angeles Sparks guard who was voted WNBA defensive player of the year in 2017. “Ariel maximizes her talent with effort, which is something Alana Beard has done her whole career.”

McCarty said: “She plays like this every day, period. Ariel’s not only an offensive threat; she’s an all around threat. That’s what really defines here.”

For all practical purposes, the game was over when Texas stormed to a 27-4 lead after one quarter. The Longhorns, playing inspired defense, limited the Horned Frogs to a single field goal in the first 10 minutes. The Horns were tough on defense throughout, holding TCU to 35.5 percent shooting from the floor.

Aston said the Longhorns were uplifted by a raucous crowd of 6,023. Many of the fans had stayed at the Erwin Center after watching ESPN’s “College GameDay” early Saturday.

“We seem to have a little of a different personality and energy level when we play before our home crowd,” she said. “I could nitpick at a few things, but we had a pretty complete performance today.”

Among the players who had solid performances was freshman Rellah Boothe, who had missed the previous seven games serving a team suspension. Boothe received a rousing ovation when she entered the game with 1:21 left in the first half. She scored within 30 seconds and finished with nine points and three rebounds.

“She took some time to work on some things that were important to her growth,” Aston said. “She did a great job with that, and we got to a place where she was comfortable being back in the setting where she was playing the games. … The one thing Rellah can give you is offensive presence. Now we have to work on the other end.”

Texas improved its record to 5-0 in games played on Saturdays, winning by an average margin of 28 points. This was the most points by Texas since a 92-68 victory over Washington on Nov. 25.