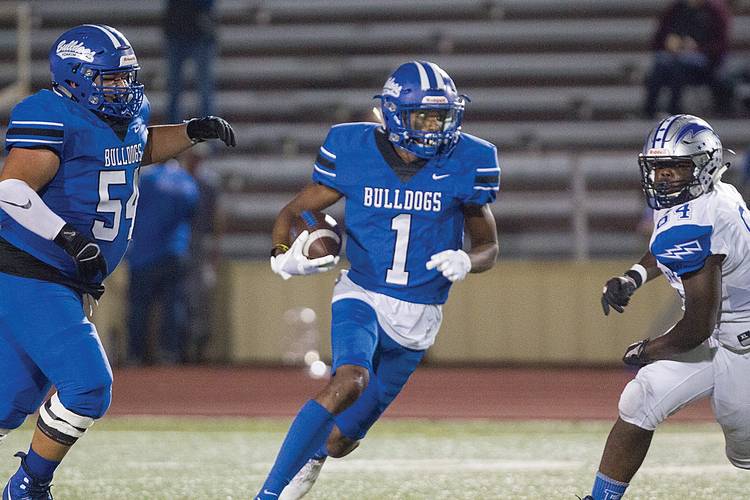 Texas always wanted to add another wide receiver to the 2018 class. The efforts picked up when slot receiver Rondale Moore de-committed from the Longhorns in December in favor of Purdue, a program closer to home. Tom Herman didn’t need to look far for the replacement.

Joshua Moore, a 4-star from Yoakum High School, resurfaced as a priority target when he de-committed from Nebraska and the Longhorns locked him up with a commitment, giving the Longhorns a trio of Fabulous 55 wide receivers. Moore joins 4-stars Brennan Eagles and Al’vonte Woodard in the 2018 class.

Skill set: Moore can play slot or outside receiver. He’s an elite route-runner who participated in The Opening Final over the summer and at the Under Armour All-America Game in Orlando on Jan. 4. There, Moore was one of the players the Texas commits in attendance recruited hard and it worked. As did the instant attention from Texas wide receiver coach Drew Mehringer when Moore de-committed from Nebraska, showing up to his football practice the next day.

Moore is a speedster with big play ability. He glides around the field and played multiple positions at Yoakum, reaching a state championship game as a junior. Moore spent time playing nearly every skill position on offense and as a defensive back on defense.

In his three-year varsity career, Moore recorded 78 catches for 1,319 yards and 19 touchdowns. He added 982 yards and 10 touchdowns on the ground. He was a three-time all-district honoree.

Immediate impact: Playing time will be available for Moore at slot receiver. Texas didn’t find a consistent and reliable player at the position in 2017 and Moore will arrive on campus as a polished wide receiver. His ability to run precise routes and consistently catch the ball could make him a favorite target of the Texas quarterbacks. Herman’s offense requires dynamic slot receivers and Moore is poised to fill the void.

Fitting into the position: Every Texas fan watched the struggles on offense in 2017. Blame can be spread towards injuries on the offensive line, inconsistency at quarterback and a lack of consistency in the running game. Some of the blame needs to go to the wide receivers, who failed to make a ton of plays. Moore is the type of player who can take a simple route and turn it into a touchdown and that’s something Texas currently lacks.

Recruiting at the position: Moore is a great addition to Eagles and Woodard. Eagles is strictly an outside wide receiver who can stretch the field vertically. His 6-foot-4 frame makes him a mismatch against most defensive backs. Woodard, much like Moore, can move around and play multiple wide receiver positions. It’s a quality in-state trio landed by Texas.