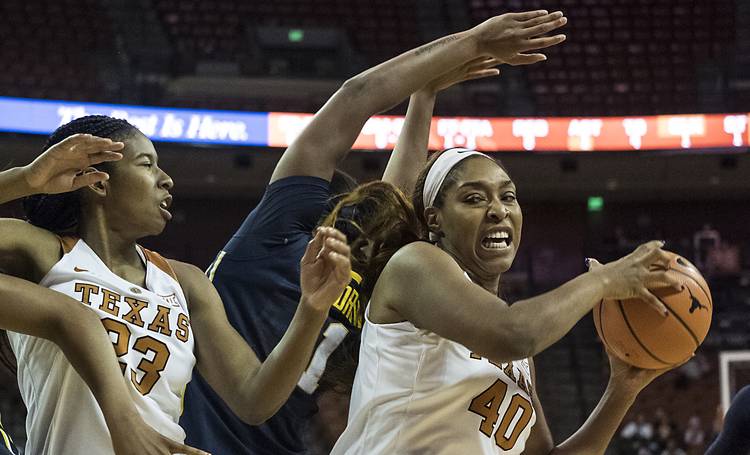 Once Jatarie White hit the floor, it was smooth sailing for Texas.

White had 18 points and 10 rebounds for her second double-double of the season to lead No. 6 Texas over West Virginia 73-55 on Monday night.

Texas responded by outscoring the Mountaineers 19-7 in the second quarter to have a 37-26 lead at the half.

Both teams would trade scores throughout the first 15 minutes of the second half. West Virginia (17-7, 5-7) cut the lead to seven with 5:16 left in the third quarter, but couldn’t get closer.

The Longhorns would finish the game on an 11-1 run to complete the regular season sweep of WVU.

“I definitely thought getting Jatarie involved in the second half was probably the difference in the game because it opened some things for our guards and eventually Ariel (Atkins) got involved in the fourth quarter, but I did think the difference was getting in the second half getting our bigs involved,” said Texas head coach Karen Aston. “(I’m) really proud of this win.”

Ariel Atkins would join White in double figures with 17 points. Audrey-Ann Caron-Goudreau was a point short of a double-double with nine points and 10 rebounds.

Texas outrebounded West Virginia 44-34 and outscored the Mountaineers 38-12 in the paint.

West Virginia finished the game shooting 10 of 20 from beyond the arc, but shot an abysmal nine of 41 from two-point range.

“We kept cutting (the lead), getting into single digits, we just don’t have enough manpower,” WVU head coach Mike Carey said. “They’re deeper and they have better players.”

Texas remains within two games of the Big 12 lead, just behind 3rd-ranked Baylor. The Longhorns will need a win over the Lady Bears on Feb. 19 in Austin and Baylor will need to drop an additional game for UT to clinch a share of the Big 12 title.

With the loss, West Virginia has dropped seven of their last 11 games after starting the season out on a 13-game winning streak.

The win over West Virginia completes a tough stretch for the Longhorns that forced them into five games in three days, two of which were on the road.

Texas picked up wins over Kansas on Wednesday and TCU on Saturday.

“I think this definitely looked like our third game in five days,” Aston said.

White had nothing but nice things to say about WVU’s Muldrow, who has become a utility player in Morgantown.

“I really think Muldrow is a really good player because she is so versatile,” White said. “She can pull up for the three and also drive to the basket.”

With a win over Kansas State on Saturday, the Longhorns should remain in the top 10 of the AP Top 25, but unless No. 4 Louisville or No. 5 Notre Dame suffer multiple losses, they likely won’t crack the top five.

Texas returns to Austin to host Kansas State on Saturday.

West Virginia makes the long trip to Lubbock to take on ailing Texas Tech on Saturday.