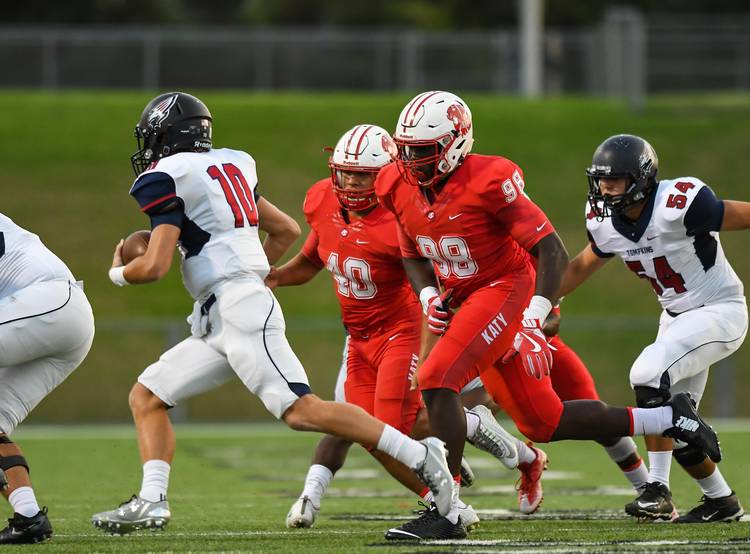 Moro Ojomo emerged as a top target at defensive tackle late in the recruiting cycle after turning in a terrific senior season. The 3-star Katy product was named his district’s defensive MVP and then watched offers roll in, beginning with Texas on Dec. 6. Many more national programs followed suit.

Ojomo, who took an official visit to Texas on Jan. 26, became 26th commitment for Texas’ class. He’ll pair with 4-star Keondre Coburn as the Longhorns’ defensive tackles for the cycle.

Here’s a closer look at Ojomo and his potential impact on campus.

Skill set: Ojomo is just beginning to scratch the surface as a prospect. The 6-3, 280-pounder is only 16 years old. He won’t turn 18 until before his sophomore season. He’s still growing, and that makes his upside appealing. Ojomo could easily grow an inch or two and add 30-40 pounds to his frame before stepping foot on the field.

Ojomo is a three-technique tackle, excelling when he’s allowed to battle guards and avoid double teams. He’s strong at the point of attack, but his best attribute is his ability to run up and down the line of scrimmage. Ojomo carries his weight tremendously and is surprisingly athletic for a prospect his size.

He’s pegged to play the position that Chris Nelson occupies, with Coburn more of a nose tackle like Poona Ford. Ojomo can play tackle in a 4-3 or as an end in an odd-man front like the one often employed by UT defensive coordinator Todd Orlando. Add in Ojomo’s potential for growth and he’s the type of prospect who could blossom into the steal of the 2018 class.

Immediate impact: Ojomo’s youth makes him a prospect with upside. It also means he may need time to adjust to the college game as his body matures. Ojomo will only be 17 as a freshman and it’s tough to expect him to battle grown men on the offensive line. Ojomo is likely a project who Texas would like to redshirt. If he reaches the field, it’ll be on a limited basis to provide depth unless he blows the staff away in preseason practices.

Fitting into the program: Ojomo becomes another Houston-area prospect to follow Tom Herman to Texas. The Longhorns have plundered H-Town in the 2018 cycle, likely a result of Herman’s established relationships in the area from his time as the head coach at Houston. Scheme-wise, Ojomo is a perfect fit for Orlando. He can play multiple positions along the defensive line and Texas values versatility in its defensive linemen.

Recruiting at the position: Texas closed well at defensive tackle after failing to sign a single prospect during the early signing period. Ojomo pairs perfectly with Coburn. Both are big, hard-nosed players with athleticism and versatility. Yet their skills are different enough to eventually play together for Texas. The Longhorns wanted two elite defensive tackles and defensive line coach Oscar Giles and the staff achieved that goal.

Texas is poised to close 2018 recruiting class with a flurry (and possibly leapfrog to No. 1 overall)