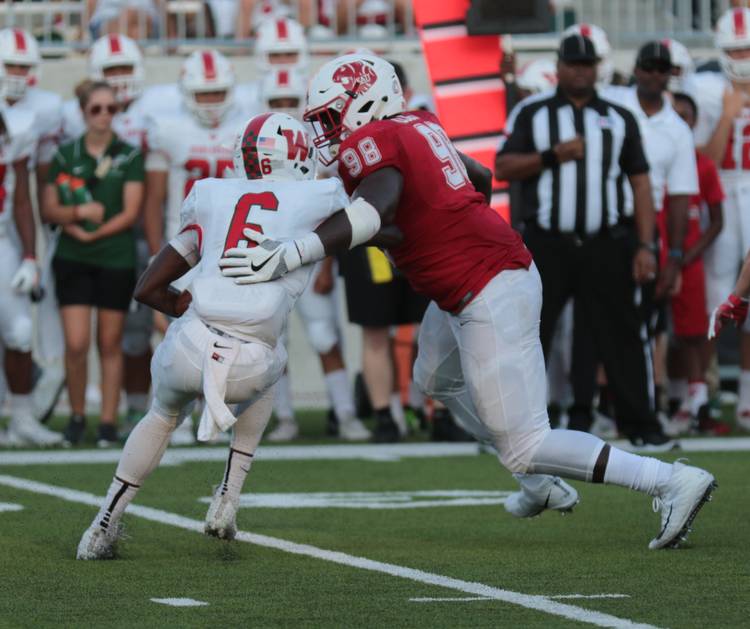 The Longhorns added a player with tremendous upside Tuesday night when Katy defensive tackle Moro Ojomo pulled the trigger and became the 26th commitment of Texas’ 2018 recruiting class. The 6-foot-3, 280-pound is the No. 50-ranked player on the Fabulous 55 and is a 3-star prospect, per 247Sports Composite.

Ojomo would likely rank higher if he wasn’t 16 years old. He arrived on the recruiting scene late, earning district defensive MVP honors as a senior. He put out his senior tape in December and watched his stock rise. Texas offered on Dec. 6. Programs like Texas A&M, Oregon, Notre Dame and Oklahoma followed. Ojomo even picked up an Alabama offer on Jan. 30.

“It went crazy in December after coaches started watching my senior tape,” Ojomo said Tuesday night. “I’ve grown up playing with older guys so it was normal to me. It’d be crazier if I still had two years of high school left.”

Ojomo grew up in Nigeria and attended private school, which meant kindergarten started at 3 years old in the British system. He moved to California at the age of 9 and then to Katy before his seventh-grade season.

“I played with people my age growing up before I moved to Texas so I was used to being the biggest player on the field,” Ojomo recalled. “That changed when I moved to Texas and was one of the younger kids in the grade. It was rough at first.”

Ojomo is a defensive tackle who plans on playing any of the three defensive line position in Texas’ defense. He’ll aim to play in the spots currently occupied by Chris Nelson and Charles Omenihu with the possibility of sliding into nose tackle in certain situations. Due to his age, growth is possible.

“My dad is 6-foot-5 and I want to be taller than him,” Ojomo half joked. “I don’t want to reach 300 pounds. I want to stay lighter and keep my athleticism. I play nose tackle at Katy and am looking forward to not taking on double- and triple-teams on every play.”

The Longhorns want to sign two defensive tackles in the 2018 class and a duo is currently committed now that Ojomo is on board. Texas awaits the signature of 4-star defensive tackle Keondre Coburn, who chose not to utilize the early signing period. Coburn decides at 8 a.m. Wednesday morning and will sign with the team of his choice.

The collection of talent in the 2018 class was a selling point for Ojomo.

“There is something going on at Texas. Remember this, we’ll win a national championship,” he said. “The recruiting class was a big factor. I wanted to be part of what is happening at Texas.”