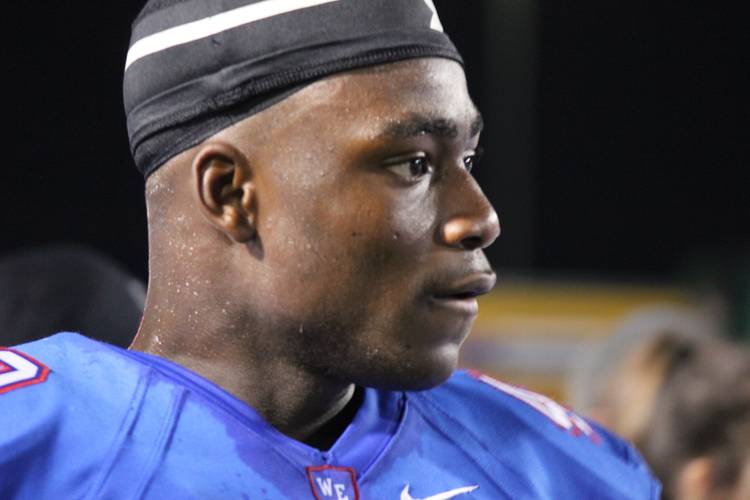 Texas answered most of its 2018 recruiting questions during the early signing period by inking 19 prospects on Dec. 20. Tom Herman and his staff were then allowed to focus on the remaining targets with most of the class locked up.

Since then, Texas added commitments from a pair of out-of-state defensive ends and Joshua Moore, a Fabulous 55 wide receiver from Yoakum. Herman wasn’t done. Due to attrition and a small 2017 class, the Longhorns can sign upwards of 30 players this cycle.

Texas holds 26 commitments and the class ranks third in the nation. The Longhorns signed the top five players in the state and undoubtedly reclaimed Texas as its recruiting ground. Questions do remain, however, as time runs out on 2018.

All unsigned 2018 prospects can fax a letter of intent on Wednesday.

The short answer is probably. It’s unlikely that Texas catches Ohio State or Georgia, but it’s also unlikely that another school like Penn State, Alabama or Clemson can rally enough commitments to surpass the Longhorns in the national rankings. If Texas does catch Ohio State or Georgia, it’ll be because of sheer class size. The Longhorns could end the cycle with nearly 30 commitments.

If all goes to plan, Texas will hold onto the commitments of Keondre Coburn and Keaontay Ingram, sign fellow commits Michael Williams, Daniel Carson and Joshua Moore, and add targets like Joseph Ossai, Moro Ojomo and Andrew Parker. In-state wide receiver Tommy Bush is also still in the mix.

There aren’t as many elite uncommitted prospects as in years past because of that early signing period. More than 75 percent of P5 commits are already signed, preventing last-minute flips on signing day. Clemson could make a late run.

Will Texas hang on to Keondre Coburn?

Only two UT commits decided not to utilize the early signing period. One was Carthage running back Keaontay Ingram, who chose not to sign because his team was playing for a state title on the same week as the early period. (Ingram was the subject of our annual signing day Q&A with an incoming Longhorn.) Coburn, a 4-star defensive tackle, chose not to sign because he wasn’t enrolling early and he wanted more time to reflect on his decision.

The Spring Westfield defensive tackle was mostly silent during January and didn’t release many hints of what he plans. Texas is still the favorite, but the nervousness surrounding his commitment status isn’t unwarranted. Texas expects to add Katy defensive tackle Moro Ojomo before signing day.

Which team will Joseph Ossai pick?

Texas is the betting favorite and has been since December. Ossai, the 4-star defensive end from Conroe Oak Ridge, is the top uncommitted prospect on Texas’ board. The 6-4, 220-pound end could play multiple positions as a Longhorn; he’s big enough to stay at defensive end and athletic enough to play outside linebacker.

Ossai is a pass-rush specialist who favored Texas A&M early in the cycle. Defensive line coach Oscar Giles swooped in after the firing of Kevin Sumlin to secure the lead for Texas. Ossai is set to announce at noon on signing day.

Will Andrew Parker flip from Arkansas to Texas?

New Orleans native Andrew Parker wasn’t on Texas’ recruiting radar for most of the cycle. The 3-star middle linebacker from Sophie B. Wright High School (La.) didn’t receive an offer from UT until Jan. 26, five days after he had committed to Arkansas.

That didn’t stop the Longhorns from pursuing him, however, and Herman convinced the nation’s No. 67-ranked inside linebacker prospect to take an official visit to Austin on last weekend. Per Parker, that visit was a success. Many feel he’ll sign with Texas.

Is it too late for Tommy Bush?

The Longhorns always wanted at least four wide receivers in the 2018 class and now sit at three with the recent addition of Joshua Moore. Texas tried to convince Lawrence Keys III to join the group, but it is looking more likely that the New Orleans native chooses Notre Dame. Efforts to flip Texas A&M commit Jalen Preston also failed. That leaves Bush, a 6-foot-5 receiver from Schertz Clemens.

He’s held an offer from Texas for months now, but he was never one of the top targets until recently. Bush took a visit to Baylor and stopped by Texas on Sunday before heading home, giving Texas some hope. He’ll announce his decision at 11 a.m. on national signing day. It will air on ESPN2. Texas is in the top five with Ole Miss, Baylor, Georgia and Michigan State.