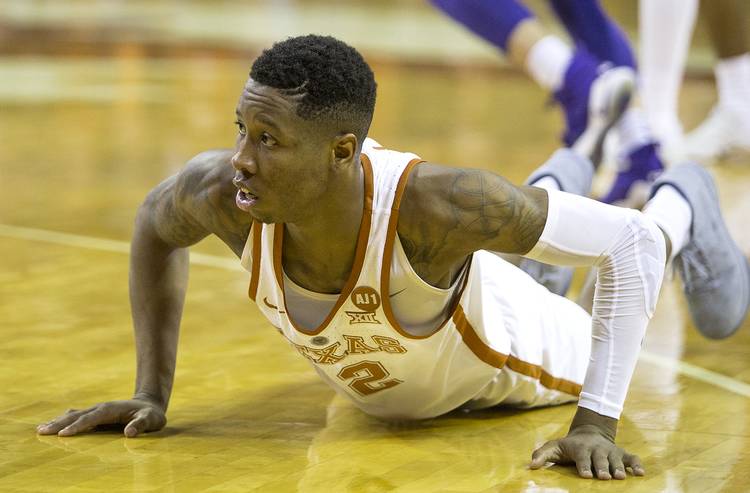 Texas guard Kerwin Roach II (12) lifts himself up from the floor after missing a final-second, game-tying shot during a NCAA college basketball game against Kansas State in Austin, Texas, on Wednesday, Feb. 7, 2018. NICK WAGNER / AMERICAN-STATESMAN

There was an odd moment after the final horn Wednesday at the Erwin Center. For maybe 10-15 seconds, thousands were silent. There was no noise coming from the loudspeakers. The public address announcer said nothing, not even the final score.

The only ambient noise was that of shoes hitting the concrete as fans plodded to the exits.

Coming off a thrilling win over Oklahoma, Texas spent most of the night sleepwalking through a 67-64 loss to Kansas State. Spirit was non-existent. The play was uninspired. The Longhorns (15-9, 5-6 Big 12) acted like a group that simply didn’t want to be there.

“It’s disappointing to say the least,” UT coach Shaka Smart said. “I thought we showed some real immaturity in our response to our last game.”

Take nothing away from Kansas State (17-7, 6-5). Five different Wildcats finished in double figures, and they executed four inbound plays in the closing seconds as the Horns kept fouling to get into the bonus. Trying to do that without turning it over is no easy feat.

Trailing by two, UT’s Matt Coleman tried to throw a lob pass to Mo Bamba with 3 seconds left. But the ball was knocked away, and K-State corralled it. “It was a lob attempt,” Coleman said. “Should have just laid it up, though.”

Kerwin Roach II got one last-gasp 3-point attempt as time expired, but it didn’t even come close. The final horn sounded and then stopped. Aside from possibly church, you’ve never heard a building with 9,211 souls so quiet in your life.

“I felt that our spirit wasn’t there all the way,” Coleman said. “We didn’t have enough energy going into the game. That’s about it.”

How could that be? Texas had an uplifting five-point win over No. 12 OU over the weekend. A win on Wednesday would have put the Horns in fourth place with the tiebreaker over the Sooners. Instead, meh. The Horns sit sixth with seven regular-season games remaining.

“I don’t know,” Coleman said. “That just comes from within. They wanted it more than us.”

Smart doesn’t swear publicly but it was clear he was steamed afterward.

“There’s going to be a lot of truth and honesty tomorrow when we sit down and watch tape and when we practice,” Smart said. “This league, every game is challenging whether you win or lose. But that’s what we signed up for. That’s where we are. If a guy wanted to play at a lower level, he should have gone to a lower level. We’ve got to be big boys at understanding that tonight, we didn’t get X, Y and Z done and those thing will be exposed.”

Smart was just getting revved up.

“Tonight, we got too caught up with things not going our way.”

Texas came out on fire, storming to a 14-7 lead. Jericho Sims had back-to-back dunks and Bamba got going early. But midway through the first half, Texas’ seven-point lead dwindled away. K-State’s Cartier Diarra scored on a sizzling reverse layup and the Wildcats led 27-26.

Bamba finished the first half with 15 points and seven rebounds. But Dylan Osetkowski just drifted through 17 minutes without even being noticed. “Right now, he’s questioning himself on things and it’s causing him to be hesitant,” Smart said of Osetkowski.

Roach went 0 for 6 shooting in the first half. Coleman was 1 for 5. Bamba and Eric Davis Jr. provided the only scoring punch as the game was tied 34-34 at the break.

From that point on, it was mystifying. Bamba’s only bucket in the second half was a dunk with 1:38 remaining. K-State went on a 9-0 run to create a five-point cushion with four minutes left. That proved to be enough.

“It hurts pretty bad,” Bamba said. “No game in this league is easy but homes games are supposed to be the games where you lead the spirit. You drop one at home, and that kind of hurts a little. But we’ve got to reset for TCU on Saturday.”

NCAA Tournament teams don’t vacillate from win to loss to win to loss like Texas does. That’s another reason why this loss was so demoralizing. It was a winnable game in a league where nothing is easy.

That’s why Smart was so worked up. If Texas does end up missing the tournament, nights like this will be Exhibit A as to the reason why.

“Tonight, we got too caught up in things not going our way,” Smart said. “That ain’t the recipe for success.”

Getting defensive: Texas loads up on the defensive line, secondary in nation’s No. 3-ranked class