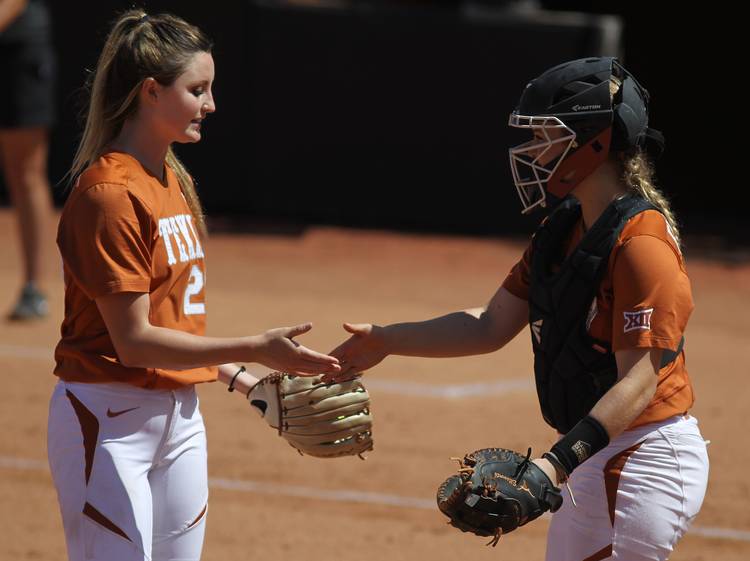 Once again, Texas will be heavily armed as it heads into the 2018 softball season.

These aren’t Cat Osterman’s or Blaire Luna’s Longhorns, though. When she was a senior in 2006, Osterman pitched 286 innings and completed 36 of the 39 games she started. In 2013, Luna logged 251 innings for Texas.

That wasn’t the case in 2017, however. Last season, no Longhorn pitched more than senior Tiarra Davis (121.1 innings). Texas (33-26) utilized five pitchers, four of whom ranked among the Big 12’s leaders in ERA.

The Longhorns open their season this weekend, and fans should expect a similar approach in the circle.

“Well, we have six arms,” said sophomore catcher Taylor Ellsworth, correcting a question about the five-arm rotation. “Everyone brings something different to the table. Catching every single one of them, they all are different in their own way and unique. When we’re hitting against them, they give us a struggle.”

Texas coach Connie Clark — starting her 22nd season in Austin — likely will throw all six of her pitchers at this weekend’s Texas Classic, which will draw Wisconsin, Colorado State and Incarnate Word to town. Davis is gone, but juniors Erica Wright and Brooke Bolinger are back, as are seniors Kristen Clark and Paige von Sprecken as well as freshmen additions Chloe Romero and Ariana Adams.

Wright has the credentials to be considered the team’s ace. She started 21 times in 2017 and went 8-7 with a 1.63 ERA and 102 strikeouts. She missed the 2016 season with a rib injury, but is only two years removed from an 18-win season as a freshman.

Von Sprecken went 7-6 last year; Clark said she may end up playing at other positions as well in order to keep her bat in the lineup. Bolinger, a left-hander, appeared in 26 games following her transfer from Nevada. Clark has made 34 relief appearances in her career but could start this season.

Clark noted that Romero, who threw eight no-hitters her senior year of high school in California, is “doing some amazing things right now.” Texas expects to have Adams start her collegiate career in the bullpen.

“Just having that depth, it should be good,” Wright said of her “squad within the squad.” “If somebody is struggling, someone else can to come in and hopefully get the job done. I’m just hoping that we all can stay on the attack.”

Texas, which was picked third in the Big 12 preseason poll, opens with Incarnate Word at 4:30 p.m. on Friday, with von Sprecken slated to start.

RELATED: Diamond Dust — Texas is off the preseason radar (and maybe that’s a good thing)

Clark — the only coach Texas has had and the second-longest tenured coach on campus behind swimming’s Eddie Reese — has compiled an 840-375-3 record at UT with five College World Series appearances, but is entering the final year of her contract. New UT athletic director Chris Del Conte declined to address Clark’s future last month, saying he hadn’t yet evaluated the situation.

Clark said those discussions about her future will “happen how it’s supposed to happen when it’s time to happen.” She said she didn’t expect her job security to be a distraction this spring. Wright echoed those sentiments.

“That’s kind of one thing, it’s not something we focus on because it’s not anything we can control,” Wright said. “Whatever happens, happens, and we’re just out here to play softball and do what we can do.”

12 Big things about Big 12 basketball: Is this the week someone breaks away from the field?

How did national signing day affect the Big 12? Looking at teams’ key comings and goings