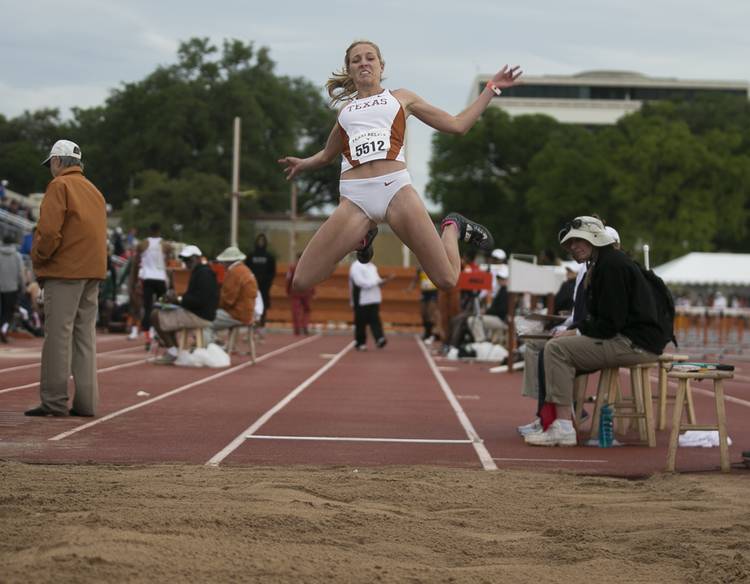 Texas' Georgia Wahl competes in the long jump during the 2016 Texas Relays, April 1, 2016. Now a junior, she's competing in the pentathlon during this indoor season. RICARDO B. BRAZZIELL/AMERICAN-STATESMAN

Since middle school, Georgia Wahl has worn the same gold earrings to every track meet.

Texas’ junior triple jumper wore the clover-shaped earrings when she won four Southwest Preparatory Conference titles while attending Houston Episcopal. Wahl wore them when she jumped at the Big 12 outdoor meets in 2016 and 2017. And this winter, those earrings are making additional appearances on the track and in the field.

Wahl has been participating in the pentathlon this indoor season. She had previously long-jumped, but her new duties include the 60-meter hurdles, high jump, shot put and an 800-meter sprint. She participated in heptathlons in high school — a competition that includes the five aforementioned events as well as the javelin and 200-meter sprint — but her first pentathlon was run last month.

“It’s like welcoming back an old friend,” Wahl said.

She’ll compete in the pentathlon this week at the Tyson Invitational in Fayetteville, Ark. “It was hard at first, but it’s been fun,” she said.

Before this season, UT coach Mario Sategna approached her about the pentathlon. Wahl was recruited to Texas as a triple-jumper, then began long-jumping her sophomore year. Placing her in the pentathlon, however, would put Texas in a position to pick up extra points at the Big 12 meet. Last year, the UT women fell 29.5 points behind Baylor at the Big 12’s indoor championships. UT had won the previous three conference titles.

“She just comes in, takes care of business every single day, and that’s all that you can ask as a coach,” Sategna said. “I don’t think it’s just by chance that’s she having some success, and the success she’s having is still scratching the surface. She’s going to make a big impact for us at the conference level.”

Wahl is the only athlete that UT converted into a multi-event performer this season. Texas, though, already boasted a roster with Wolf Mahler, George Patrick, Virginia Preiss, Steele Wasik and Ashtin Zamzow in the combined events.

Wahl said the chance to train with Texas’ other multi-event athletes has been a bonus. She still needs to work on her throws, a deficiency she credits to her history as a youth gymnast since “I never played any ball sports at all. I had to start from square one with all the throws.” The 800-meters, she joked, is “my personal favorite.”

In her pentathlon debut, Wahl finished eighth at a meet hosted by Texas Tech. Preiss and Zamzow, respectively, were 10th and 24th in Lubbock on Jan. 27. Preiss came in 11th in the heptathlon at the 2017 Big 12 outdoor meet, while Zamzow owns the school record in the heptathlon and the second-best pentathlon score in UT history.

Wahl is still participating in her natural event during the indoor season. A leap of 12.56 meters at last week’s New Mexico Classic was a personal best and the Big 12’s seventh-best mark this winter. She credited her improved jump with her heptathlon training.

“Especially with adding the multi-events, Mario agreed that it would help me get stronger in the triple jump,” Wahl said. “It obviously has because I PR’d by a foot at the last meet. We’re hoping to see that go a little further.”

Wahl’s focus will return to her jumps once the indoor season is over. But she still hopes to compete in the heptathlon at the Texas Relays.

12 Big things about Big 12 basketball: Is this the week someone breaks away from the field?