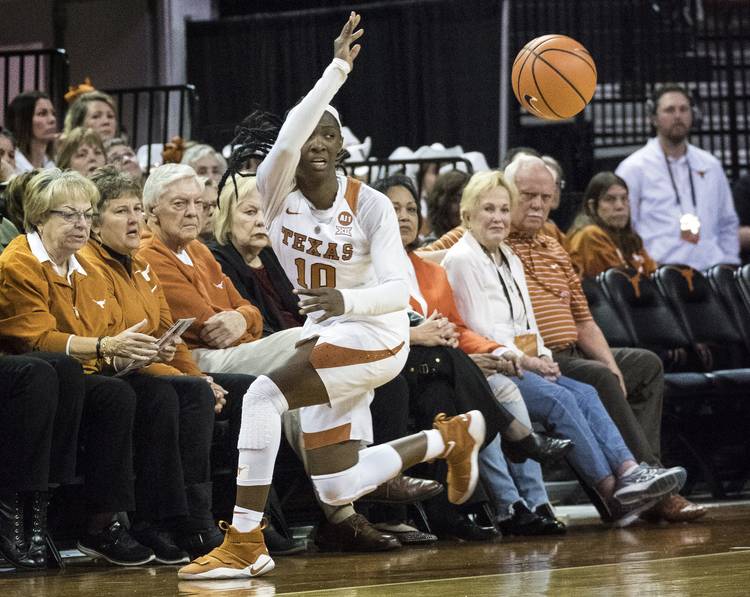 With the clock ticking down, Texas fed the basketball to Sug Sutton, the team’s designated buzzer beater.

The sophomore point guard hit a three-point bucket as time expired in the first quarter, and nailed a long two-point shot from the left baseline as the clock struck 00:00 to end the half.

Sutton’s treys were among the highlights for the Longhorns during a 76-54 victory over Kansas State Saturday night at the Erwin Center.

“After I hit the first hot (to close the first quarter), it brought the energy level up,” Sutton said. “It felt like we were kind of dead in the first half. I wanted to be someone who would bring some energy.”

Brooke McCarty, who had a game-high 17 points, shook her head while Sutton was speaking.

“When you can hit a shot like that to end a quarter, it seems to lift you up when you start the next quarter,” McCarty said. “Those were huge baskets.”

On a negative note, senior forward Audrey-Ann Caron-Goudreau suffered an injury to her left wrist while scrambling for a loose ball and did not return. On Sunday, her injury was described as a bone contusion and is listed “day-to-day” as far as her return.

McCarty struggled offensively for much of the game, but came to life in the third quarter. The 5-4 senior scored 10 points in a 1-minute, 48-second span on the quarter.

When asked about her recent shooting woes behind the three-point line, she said, “It’s a process.”

If Caron-Goudreau misses any time with the injury, Holmes most likely will find herself in the starting lineup for the first time this year. The Big 12 Freshman of the Year last season, Holmes has made steady progress since returning from a 10-game team suspension to start the season.

K-State coach Jeff Mittie, who team was outrebounded 43-29, said Holmes should make a big difference. He recalls that she was not at her best when Texas beat his Wildcats 75-64 last month.

“She looked like she played with some uncertainty when we played in Manhattan,” Mittie said. “And that was totally the opposite of how she played last year. Tonight she looked more certain.”

Karen Aston said she has been pleased with her team’s effort during its current five-game winning streak. Practices have been crisper the past 10 days, she said, and the players are showing more effort, especially on defense.

K-State shot an incredible 77.8 percent from the field (7-for-9) in a torrid first quarter, but finished the game shooting just 39.5 percent. Peyton Williams scored 13 points and Kayla Goth 12 for the Wildcats.

“I think our players are starting to enjoy the other side of the ball and not depend so much on whether the ball goes through the net,” Aston said.

The Wildcats, who average a Big 12-low 12 turnovers a game, were throttled by UT’s pressure defense and turned the ball over 25 times, 10 in the first quarter.

For McCarty and Atkins, this marked their 100th victory as teammates at Texas.

Texas continues it Big 12 journey with a home game against Texas Tech on Wednesday.