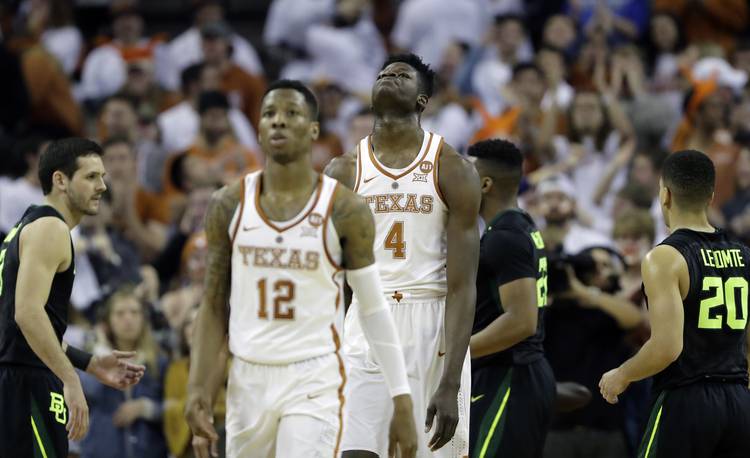 Normally after all home games, Texas players come to the post-game interview room after meeting with coach Shaka Smart. Not Monday, though.

Not after a 74-73 double-overtime loss to Baylor.

“Our guys are upstairs hashing some things out,” Smart said. “It’s going to be a while before they’re here.”

No players ever showed. There’s plenty to discuss internally, to be sure. After a rough week with two lackluster losses, Texas should’ve come out swinging against Baylor, an equally anxious bunch. But the Horns started the first half missing 12 of 14 shots. Not ideal.

They battled back and trailed by only three at halftime. They opened the second half by missing nine of their first 10. Texas continued to fight as Matt Coleman hit a 3-pointer, scored on a scoop layup and drilled two free throws to force overtime. Then, the Horns hit six consecutive free throws to force double OT. Still not enough.

In the extra frame, Baylor’s Manu Lecomte missed a jumper with 6 seconds left, and Jo Lual-Acuil was there for a put-back dunk. Kerwin Roach II missed an off-balance jumper before the final horn, and Texas swallowed its third straight defeat.

Smart pointed to that one final possession as being the difference. “The reality is if we get a stop on that last play, your narrative is different,” Smart said.

The reality is Texas (15-11, 5-8 Big 12) is in free-fall. Three straight losses have badly damaged this team’s NCAA Tournament hopes. It was Baylor coach Scott Drew’s sixth straight win over his UT counterpart. And it dropped Smart’s overall record at Texas to 46-46 — a mediocre .500 in his third season.

“We’ve lost three straight games,” Smart said. “We obviously need to find a way to win our next game. You guys (the media), you’ll do your job and label it whatever you want to label it.

“As a coach, you have to make sure as a team you do everything you can to win,” he added. “We were one play away tonight. But when it doesn’t go your way, you’ve got to immediately analyze why and get better. So that’s what we’ll do.”

Asked if his team can stop it, Smart said, “Yeah, of course, they can.”

This is also a Texas team that’s now a half-game out of last place in the topsy-turvy Big 12 standings. Baylor (16-10, 6-7) is back on the upswing with an upset win over 10th-ranked Kansas and now this one over Texas.

While things may look bleak, the Horns are far from finished. In this league, every team has a fighting chance all the way through February. But UT’s road is rugged. Saturday’s trip to Oklahoma is the first of three road games out of its next four.

“Every team wants to win as many as they can,” said Drew, who acknowledged that nine league wins gets anybody into the NCAAs. “I believe this is a year that eights are in. At some point, you might even get the right team with seven (wins), if it’s the right wins and the RPI. You can’t hold it against teams’ records when you’re playing great teams night in and night out.”

While Coleman’s late-game heroics were needed, he struggled most of the night. UT’s point guard was 5 of 15 shooting and finished with only three assists and one turnover. Texas was 3 for 19 shooting from 3-point range and shot 36.1 percent overall.

The Horns simply didn’t have an answer for Maston. Bamba blocked Maston’s shot attempt with 2:20 left in regulation, and after the play, Bamba nudged the Baylor senior. Maston responded by shoving the Texas big man, earning a technical foul in the process.

“It was a stupid decision,” Maston said. “I apologize to my teammates for that one.”

All it did was ignite Maston even more. In the first overtime, he hit a mid-range jumper, scored in traffic and hit two free throws to give Baylor a four-point lead. He opened the second overtime with another jumper and scored twice more, including after Eric Davis Jr. had given UT a 71-70 lead.

The Longhorns forced a critical shot-clock violation with 27.3 seconds left. Then, Roach drove and scored with 20 seconds remaining. Trailing by one, Baylor hustled down the floor and forced Lecomte to take a hurried shot.

“When I saw him shoot the ball, I put myself in position on the other side of the rim,” Lual-Acuil said. “If it was going to come off long, I knew I had time to put it back.”

Lual-Acuil was in perfect position to catch the rebound and flush it home. The handful of Baylor fans scattered around the Erwin Center and positioned behind the bench went wild. Quite a few Texas fans had already taken their free T-shirt and left by then.

“I can give you some reasons,” Smart said. “The bottom line is we came up short.”

Ranking the 2017 Longhorns in the NFL: Someone jumped up 14 spots to No. 1 on our annual list