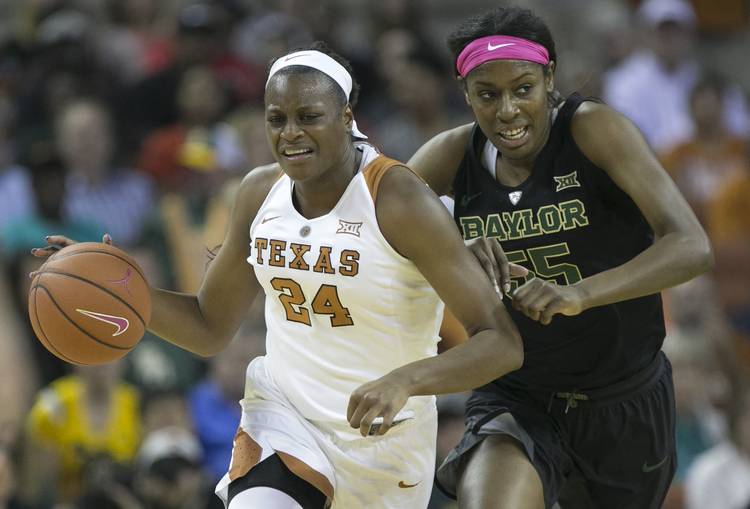 UT's Joyner Holmes, left, gets past Baylor's Khadijiah Cave in the second half at the Frank Erwin Center on Monday February 20, 2017. JAY JANNER / AMERICAN-STATESMAN

The reigning Big 12 freshman of the year was in the starting lineup in 32-of-34 games last season for Texas .

While coaches and teammates are eagerly awaiting Joyner Holmes to re-establish herself as one of the top players in the conference, the 6-foot-4 forward will find herself in a familiar role when the Longhorns play host to Texas Tech Wednesday night at the Erwin Center.

After coming off the bench for all 14 the games she has played, Holmes is expected to be among the starting five against the Lady Raiders, coach Karen Aston said Tuesday.

Holmes will replace senior Audrey-Ann Caron-Goudreau, who is sidelined indefinitely after suffering a bone contusion to her left wrist in Saturday’s victory over Kansas State.

Aston said reserve point guard Sug Sutton would have been considered as Caron-Goudreau’s replacement, too, but Texas Tech poses matchup challenges under the rim. The Lady Raiders pose one of the tallest tandems in the conference with 6-6 sophomore post Erin Degrate and 6-5 forward Brittany Brewer.

“They’re going to try to pound the ball inside and we’ll need a post presence,” Aston said.

After serving a 10-game suspension to open the season, Holmes has been slow to recapture the form that made her a freshman sensation. Being thrust into the starting lineup will be an adjustment.

“There’s a different mindset when your start because you know you have to play with consistency,” Aston said. “That’s what starters do. A lot of people think they start because they have the most talent or they’re the ones the coaches like the most. Honestly, starters are the ones who are the most consistent everyday in practice.”

Among the players whose minutes should increase during Caron-Goudreau’s absence is reserve forward Jordan Hosey, who contributed 10 points and 8 rebounds in just 14 minutes during Saturday’s victory over K-State.

During her high school career at Manvel, she led her team to a Class 5A state championship and a 133-17 record during her four years at the school. She was also selected to the McDonald’s All-America Team.

Playing a reduced role in college, Hosey said it hasn’t always been easy to watch games from the sidelines.

“I had to get out of myself and realize it’s not what I want, it’s what’s best for the team,” Hosey said. “That’s what I came her for. At one point it was hard (not to play much) but I got over it to help my teammates.”

“What she has done is given herself up for the team,” Aston said.

Texas History: The Red Raiders, women’s basketball and one heck of a rivalry