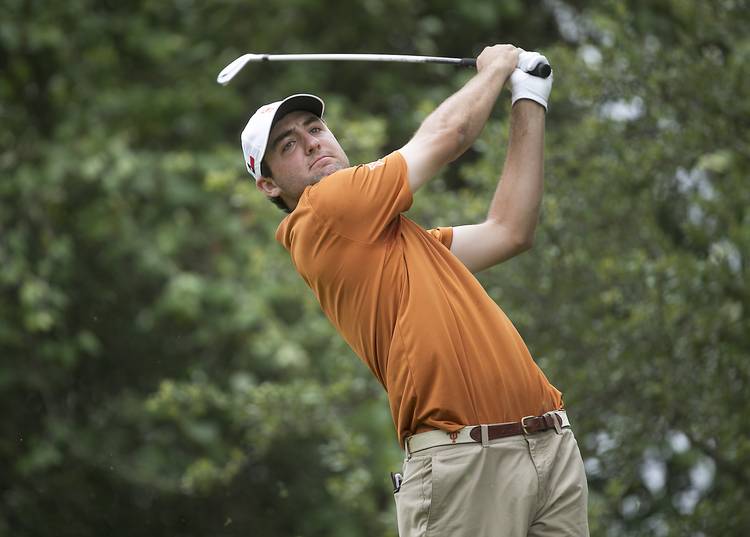 Texas senior Scott Scheffler shot 3-under-par 68 to claim the one-day, 18-hole Genesis Open Collegiate Showcase on Monday at the famed Riviera Country Club in Pacific Palisades, Calif. With the victory, Scheffler earned a spot in this week’s PGA Tour Genesis Open that begins on Thursday and features a 144-competitor field.

Scheffler was one of six collegians vying for a spot and was the only competitor to shoot a score of par or better. Scheffler finished six shots clear of two Longhorn teammates — fellow senior Doug Ghim and sophomore Spencer Soosman — as well as University of Kentucky junior Lukas Euler. The trio each signed for scores of 74. USC junior Justin Suh and University of Washington junior Carl Yuan had 75.

Scheffler logged four birdies against one bogey and shot three under par on the back nine holes, with birdies at Nos. 10, 13 and 15. He drove it short of the green at the driveable par-4 10th and chipped to tap-in range, then drained a 20-footer at No. 13 before chipping in from 20 yards, short and left of the green at No. 15.

Each collegian was paired with a PGA Tour player and two other amateurs; Scheffler was in the same grouping with former UT standout and current PGA Tour star Jordan Spieth the winner of three majors, including last year’s Open Championship.

RELATED: Who is Scottie Scheffler? 5 things to know about the UT golfer contending at the U.S. Open

Although Scheffler, 21, and the 24-year-old Spieth were never teammates at UT, they both grew up in Dallas. Admittedly, Scheffler has looked up to Spieth. As for the here and now, Scheffler found a comfortable pairing with his fellow Longhorn during the qualifier.

“He was a good playing partner, nice to talk to, good guy. Good person to be around, so I was definitely relaxed,” Scheffler said. “What he’s done in the game of golf is definitely something to look up to.”

Undoubtedly, Scheffler hopes to join him fulltime on tour. Scheffler will be competing in his fifth professional event. He was low amateur at last year’s U.S. Open at Erin Hills in Wisconsin, tying for 27th place overall. He also competed in the 2016 U.S. Open at Oakmont Country Club in western Pennsylvania. Prior to those starts, he played in the 2014 HP Byron Nelson Championship and the FedEx St. Jude Classic in 2014.

This time around, he hopes his sound play in the Showcase is an ally in a field that will include the likes of Spieth, defending champion and world No. 1 Dustin Johnson, Tiger Woods, Phil Mickelson and Justin Thomas, among others.

“(I) try to play my own game, hopefully use some a little bit of that momentum from (Monday) and keep playing solid golf,” said Scheffler, a 2016-17 first team All-America honoree. “I really don’t go in with any expectations. Playing well (Monday) is good momentum for Thursday.”

Scheffler is no stranger to Riviera; he competed in the U.S. Amateur last summer at the Los Angeles-area layout and missed match play in a playoff. He knows the classic course that dates its history to 1926 demands precision at every turn and rewards strategy as much as the power game.

“It is a good, solid golf course. It’s a good test of golf, so the better you play, the better you’re going to score,” said Scheffler, who, as of Monday, didn’t know who would be on his bag caddieing, nor whom he would be paired with in the opening round. “I think first things first: get the ball in the fairway and it makes these holes a lot easier. Off the tee is very important and just go from there.”