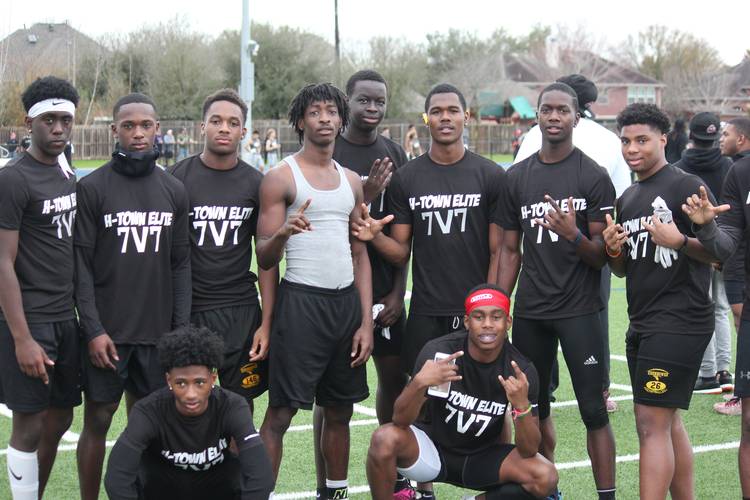 The evolution of 7-on-7 football is growing in Texas and impacting recruiting strategy. (Mike Craven)

Arjei Henderson down to five teams

Texas has yet to make its mark on the 2019 recruiting class. While rivals like Texas A&M and Oklahoma already hold at least five commitments each, Tom Herman’s program elected to slow-play the class and wait until after national signing day to begin its push. Texas’ lone commitment is Port Neches-Groves quarterback Roschon Johnson. He committed in July.

Expect that to change soon. The Longhorns will continue to recruit well under Herman after signing the third-best class in the nation during the 2018 cycle. Texas signed 27 players. Don’t expect the 2019 class to be as big, but the Longhorns have plenty of room to contend for a top-10 class.

One target who would help Texas’ chances of repeating its success in 2018 is Fort Bend Travis wide receiver Arjei Henderson. The 4-star prospect already holds 46 offers, including Oklahoma and Texas A&M.

Henderson wants to make a decision this spring. He’s down to his five final schools, he said; he’ll take visits to Ole Miss, Texas A&M, Texas, Alabama and USC.

The early guess is that Texas A&M is the early leader for Henderson. He didn’t disagree with that when he was interviewed at the Team Texas Elite 7-on-7 Tournament in Houston last weekend. One of Henderson’s 7-on-7 teammates is Jimbo Fisher’s son, Trey.  That allows Fisher to attend the 7-on-7 events, though the Texas A&M coach cannot communicate with players.

“Jimbo brought a new vibe to Texas A&M,” Henderson said. “I hear great things about Texas and I’m looking for a place I can call home and improve myself as a person, a student and on the football field. I haven’t made my decision yet.”

Henderson, who ranks No. 2 on the 2019 Fabulous 55, is a prolific prep receiver. He caught 100 passes as a sophomore and backed that up with 81 catches for 1,168 yards and 14 touchdowns as a junior. He has 32 receiving touchdowns in his two-year high school career and was a MaxPreps Sophomore All-American in 2016.

“Teams think I can play outside or in the slot. I like the idea of lining up all over the field, even being used in the jet-screen game and in the backfield,” Henderson said. “My versatility makes the player I am. I can do a lot of things and that separates me.”

The hot-button topic of the offseason in Texas high school football is the continued evolution and impact of 7-on-7 on the football landscape. Most of the state’s elite players now play on travel squads located mostly in Houston and Dallas. This trend is already formed in places like California and Florida.

The players see it as a way to compete and improve. There are worse things a high schooler could be doing on a Saturday in the offseason.

There’s no doubt 7-on-7 isn’t real football. It is a way to see who the biggest and fastest talents are, but it would be foolish to use it as a ranking tool. The routes that are run don’t match a normal offense. The defense gets away with holding on nearly every play and the quarterback rarely needs to move from his preferred spot in the pocket.

But there is value, especially for skill position players on both sides of the ball.

The worry, at least for high school coaches, is that travel 7-on-7 teams will become the equivalent of AAU basketball, which eventually ripped away most of the power from prep coaches across the nation. It’s a real concern for coaches. A college scout wouldn’t need to be in constant contact with a prospect’s head coach.

Instead, that college recruiter might be better served building a relationship with the 7-on-7 coach, giving him an in with a dozen prospects instead of one. Select travel clubs already exist, and have for some time, for baseball, volleyball and other sports. This is the new reality.

“Iron sharpens iron,” Henderson said. “My goal is to make it to college and, God willing, beyond that in football. There can’t be a negative in competing against other great players and working on our craft. I know it is better than what some other guys are doing on the weekends.”

Texas History: The Red Raiders, women’s basketball and one heck of a rivalry