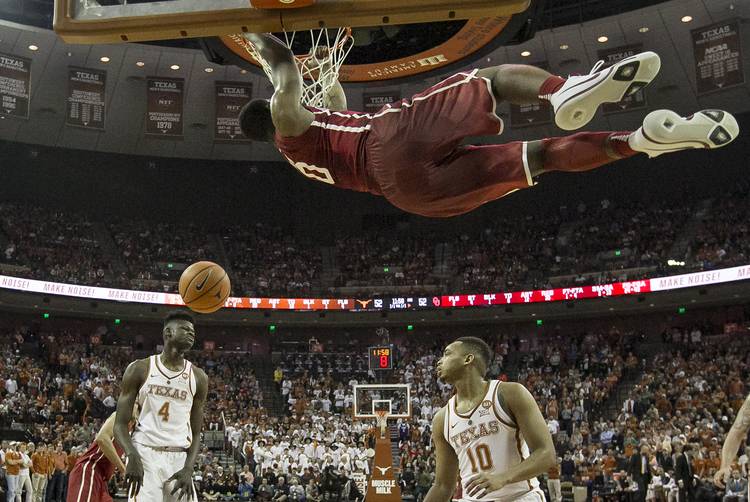 Oklahoma guard Christian James (0) hangs on the rim after dunking the ball during a NCAA college basketball game against Texas in Austin, Texas, on Saturday, Feb. 3, 2018. NICK WAGNER / AMERICAN-STATESMAN

The Big 12 standings are packed so tight, the Longhorns could still finish anywhere from third to 10th by the time March arrives. These next two weeks will be volatile.

Texas has five regular-season games left, starting with Saturday’s matchup at 23rd-ranked Oklahoma. The Horns (15-11, 5-8 Big 12) have lost three straight while the Sooners (16-9, 6-7) have lost four consecutive games. Two desperate teams are looking to stabilize themselves at the expense of the other.

It’s reached the point this season where nobody can fool anyone with new offensive sets or defensive strategies. Both teams are who they are.

The Sooners will win or lose with Trae Young, the nation’s leading scorer. The Longhorns have towering freshman Mo Bamba, but others must help with the scoring. Opponents have learned how to draw Bamba away from the basket and then go for the rim.

So, it’s simple, really. Will Texas be ready to play or not?

RELATED: Preview: Texas at No. 23 Oklahoma

Typically, UT players hold late-week interview sessions to preview the upcoming weekend game. No players were made available this week, though. There was a players-only meeting after Monday’s 74-73 double-overtime loss to Baylor. The mood inside the locker room is anyone’s guess.

Asked about his players’ response this week, UT coach Shaka Smart said, “Their response has been good.”

“They’re motivated,” Smart said. “They know we’re in a position where every game is extremely critical. At the same time, it’s important for us to focus on whatever’s next — the next practice, the next game to prepare for, the next shoot-around. The guys’ mindset is on those things.”

But Smart is clearly flummoxed as to how to shake things up. This is still a team that relies heavily on four freshmen — Bamba, forward Jericho Sims and guards Matt Coleman and Jase Febres. Junior Dylan Osetkowski, who transferred in from Tulane, is going through his first season in the rugged Big 12.

That’s five players in a seven-man rotation where this is all new. Kerwin Roach II and Eric Davis Jr., both juniors, are the only two experienced players in Smart’s rotation.

“We definitely are leaning on ’em,” Smart said of his older players. “In our program, we define leadership as the ability to make those around you better. It’s one of those things where it’s not restricted to any one individual or a couple of guys depending on what class they’re in.”

Referring to Roach, Davis and Osetkowski, Smart said, “We need those three guys to make the guys around them better, whether that’s with the words that come out of their mouth or the energy they bring. The way they play and lead by example, giving great effort, those are the guys we lean on first.”

It was only two weeks ago that Texas was riding high with a 79-74 win over OU at the Erwin Center. ESPN’s “College GameDay” was on campus to chronicle it all. Thousands of fans showed up at 8:30 a.m. that morning and packed the arena for a 5 p.m. tipoff.

Texas players found an emotionless building just four days later against Kansas State. The Horns had to create their own energy and didn’t — and lost. Then came another lackluster first half at TCU, which led to another loss. Texas had sluggish starts to both halves against Baylor and fell short in double OT.

Texas could get buried with a slow start against OU at the Lloyd Noble Center. The Longhorns have not won there since 2012. Smart said Young “can beat you by scoring, by getting to the foul line and beat you by creating baskets for his teammates. It’s not about taking away one thing.”

The Horns need to find something within — and quick. Or the final two weeks could be miserable.

Guided by Nolan Kingham, Texas opens its 2018 baseball season in the win column