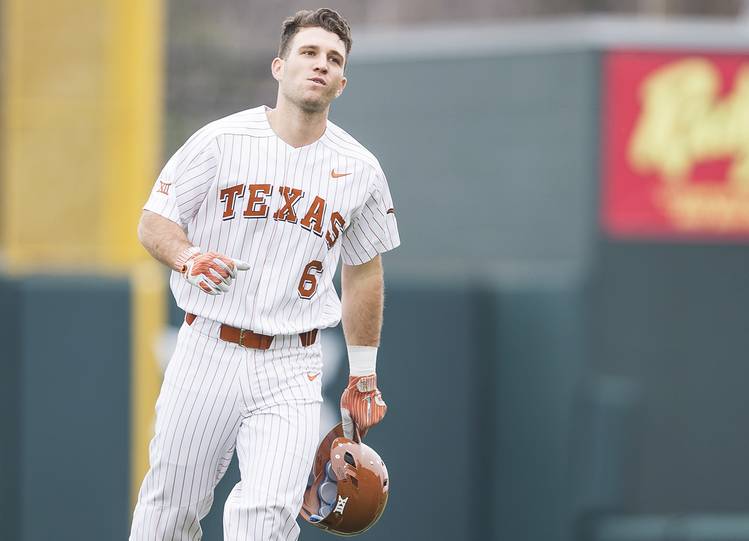 Texas junior DJ Petrinsky (6) reacts after he left a runner on base against Louisiana-Lafayette on Feb. 18, 2018. UT dropped a 2-1 game at UFCU Disch-Falk Field. NICK WAGNER / AMERICAN-STATESMAN

One day after it secured a walk-off win, Texas walked to its first loss of the baseball season.

Two walks drawn by Louisiana-Lafayette’s Daniel Lahare felled Texas in a 2-1 defeat at UFCU Disch Falk-Field on Sunday. The loss was the first of the season for UT. The Longhorns won their Saturday showdown with the Ragin’ Cajuns on sophomore outfielder Austin Todd’s walk-off homer.

Texas (2-1) was attempting to secure its first season-opening sweep since it beat Illinois-Chicago four times in 2009.

“We learned a lot,” UT junior Kody Clemens said of the opening weekend. “I think the pitchers threw well. Walks hurt us a little bit (today), but we’ve just got to get better.”

Three Texas pitchers surrendered six hits and three walks, and Louisiana-Lafayette scored on Hayden Cantrelle’s RBI single and Gavin Bourgeois’ run-scoring double. Those aforementioned hits both plated Lahare, who drew fifth and seventh-inning walks out of the eighth spot in Louisiana-Lafayette’s batting order. Lahare scored both of his runs with two outs.

Over its first two games, Texas issued only one free pass.

“We were good all weekend, but it doesn’t matter what we did Friday and Saturday,” Texas coach David Pierce said. “Today was a new day and the base on ball, even though we didn’t have a lot of them, the timely base on ball is what hurt us.”

Louisiana-Lafayette (1-2) also used three pitchers on Sunday, and reliever Brock Batty went six innings after Hogan Harris was injured during the middle of a third-inning at-bat. Texas was limited to four hits and five Longhorns were stranded in scoring position. Louisiana-Lafayette did not commit any errors, and Lahare ended three scoring threats with nice catches in center field.

With two outs in the ninth inning, pinch-hitter Zach Zubia was hit by a Batty pitch. Louisiana-Lafayette called Logan Stoelke out of the bullpen to face UT leadoff hitter David Hamilton. Hamilton ended the game with a groundout to first base.

“Sometimes you get beat 2-1 and you go, we were horrible at home plate, but I didn’t see that,” Pierce said. “I thought we hit a lot of balls hard. I thought our approach all weekend was pretty solid against a very good pitching staff.”

Texas junior Andy McGuire was credited with the loss, but he threw 1.2 innings of one-hit relief in his first appearance since May 17, 2015. Junior left-hander Josh Sawyer, who had been sidelined by a series of injuries for 659 days, was also effective in his return to the mound. Sawyer struck out three and allowed only one walk in 2.1 innings of work.

After the game, Pierce said that both McGuire and Sawyer will have a role with the Longhorns this season.

Around the bases: Todd drove in Texas’ only run with a sacrifice fly. He is responsible for five of UT’s nine RBIs. … UT junior Joe Baker, who missed much of last season with a shoulder injury, started at second base for the first time this year. … In his first start since the 2017 Big 12 tournament, sophomore Blair Henley surrendered five hits and a walk over five innings. He struck out five Ragin’ Cajuns. … Texas will host Lamar on Wednesday. Pierce said freshman Nico O’Donnell will start on the mound.