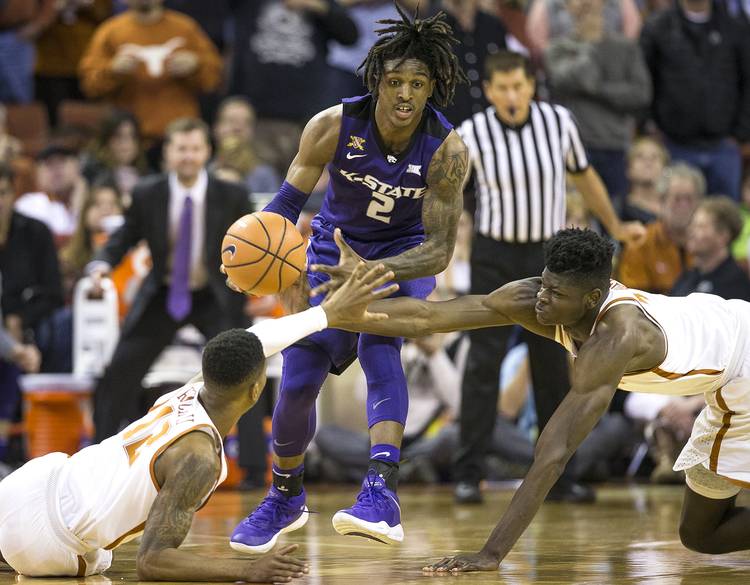 There’s an odd level of symmetry to Texas’ schedule here in the back half of February.

On Feb. 3, Texas hosted Oklahoma in one of the biggest home games of the season. ESPN brought the bright lights of “College GameDay” to the Erwin Center. The Sooners were ranked 12th and had the nation’s leading scorer. The Longhorns won by five.

Just last Saturday, OU hosted its Red River rival in one of the biggest home games of the season. ESPN sent Dick Vitale to the Lloyd Noble Center, and OU rolled out Heisman Trophy winner Baker Mayfield. The Sooners were ranked 23rd with the nation’s leading scorer. The Longhorns won by 11.

Four days later, Texas now goes to Kansas State. Only this time around, the Longhorns (16-11, 6-8 Big 12) can ill afford another slow start or multi-game swoon.

“We’re not going to dwell too much on Oklahoma,” UT coach Shaka Smart said earlier this week. “It’s something that I fought unsuccessfully. I just thought we did not do a good job that last time of turning the page.”

Remember how just last week Texas was a half-game out of last place? The Longhorns are now tied for sixth and, believe it or not, can still conceivably vault to as high as third or fourth.

Smart admitted last weekend the Horns are “fighting for our NCAA Tournament lives.” At no point over the next two weeks can this team breathe easy. That said, things are tilted in UT’s favor, provided the Horns come out with vim and vigor.

As bad as Texas played against K-State, the Wildcats won only 67-64. Five different Wildcats finished in double figures while Texas shot 41.4 percent. That’s the lowest total any Big 12 opponent has managed against coach Bruce Weber’s team this season. Marginally better shooting alone could help the Horns.

Dylan Osetkowski had just eight points and was 3-of-7 shooting against Kansas State. Afterward, Smart said, “Dylan is really questioning himself right now.” But Osetkowski was a man possessed against OU. He rang up 17 of his 21 points after halftime and looked like the player Smart once called “a unicorn.”

The Wildcats aren’t as dominant at home as they used to be. K-State is 12-13 over the last three seasons in Bramlage Coliseum, a place long referred to as the “Octagon of Doom.” Former UT coach Rick Barnes had plenty of frustrating nights in America’s heartland. Smart is 1-1 in Manhattan.

K-State is coming off a 78-66 win over Iowa State on Saturday. “We are showing spurts,” KSU guard Barry Brown Jr. said. “I feel like we have some room for improvement.”

Later this week, Texas hosts Oklahoma State, another team that caught UT napping. OSU won 65-64 in overtime on Jan. 13. The Cowboys will be coming to the Erwin Center, where the Longhorns are 11-4 this season.

Texas closes out the regular season with a trip to Kansas (Monday) and then a home game against West Virginia (March 3). At minimum, a split between those two would be ideal.

“The thing about the Big 12, and this has been the case all year, you get so many opportunity for high-quality wins,” Smart said. “There’s no better opportunity to go into a game and play a team where, if you are able to win, it’s going to be a high-quality win.”

Smart joked that he’s coached in leagues where “You really could only hurt yourself by losing. That’s not the case in the Big 12.”

Andrew Jones update: Smart went to see guard Andrew Jones at his Houston hospital on Sunday and was excited to see the sophomore showing more energy. It’s doubtful Jones will make an appearance at one of the two last remaining home games, though.

Jones has posted videos of himself shooting baskets and showing real positive energy. Athletes have returned to their sport after being diagnosed with leukemia. Smart isn’t sure if Jones will return to the Longhorns at some point in the future or not.

“That’d be awesome. I hope so,” Smart said. “I just don’t know any details about how that works. Obviously the No. 1 concern is him beating this terrible disease and beating it for good. Then, I don’t know how it works with how long you have to be free of it to do the things that are demanded of you at this level. So I have no idea. I don’t know if it’s something anyone can put a timetable on.”

Smart believes Jones “isn’t done playing basketball.” Athletes like Jones generally view themselves as basketball players first and foremost. “The exciting thing is he’s fighting to get that back and thinks of himself in that way, which is awesome,” Smart said.