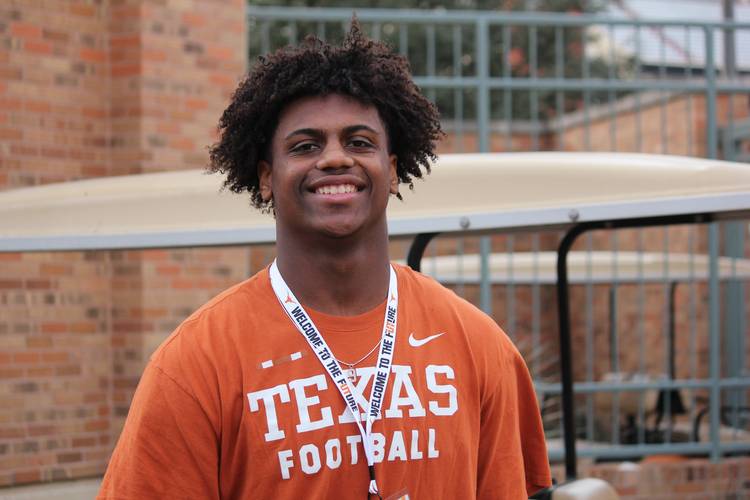 Texas’ lone commitment shutting it down

Tom Herman and the Longhorns won’t bend on their recruiting structure. Texas wants to take its time offering prospects and taking commitments because there are still 10 months until the early signing period for the 2019 class. Herman wants to win recruiting with national letters of intent, not with early momentum.

The lone commitment in the class is 4-star quarterback Roschon Johnson. The dual-threat quarterback from Port Neches-Groves made the trip to Austin on Saturday for UT’s junior day. He maintains he’s “110 percent” committed to the Longhorns and spent the day bonding with his future coaches and teammates and recruiting a few targets in his class like defenders DeMarvin Leal and De’Gabriel Floyd.

“As of right now I’m fully shutting it down and I’m straight Texas,” Johnson said after junior day. “I had a chance to communicate for a few of the dudes we’re targeting and I know a few more of the big targets are coming on Sunday.”

“We just got together at a middle school. I reached out to them and asked what they were doing last weekend and we got together to get passes in,” Johnson said. “It’s important to build a bond, especially with receivers.”

Converse Judson defensive lineman DeMarvin Leal might be Texas’ top defensive target in 2019. The 6-4, 280-pound athlete can play defensive tackle or defensive end. He visited campus for junior day on Saturday and left with the Longhorns still among his leaders.

“I talked to a couple of freshmen like BJ Foster and Caden Sterns. They talked to me about how much they love it,” Leal said. “The recruiting process is a blessing and a curse. It gets overwhelming. I’m starting to get my officials ready to go and I’m thinking about committing in August.”

Leal says he still doesn’t know which schools will get official visits. Safe money says Texas is one of those schools. Leal admits distance will be a factor and the Longhorns signed two San Antonio natives in the past two cycles with Derek Kerstetter in 2017 and Caden Sterns in 2019.

“Texas wants me as a defensive end. The 4i position, basically,” he said. “Coach (Oscar) Giles got with us defensive linemen here and looked at tape and showed us how we’d be used. The visit helped Texas.”

Herman will never abandon Texas as his home base for recruiting. But he will go after out-of-state prospects when he identifies a need the state can’t fill. The 2019 class is short on linebacker talent and the Longhorns have made California ‘backer De’Gabriel Floyd a top priority.

The 6-2, 220-pound 4-star is an outside linebacker prospect, but he’s big enough to play inside in a Gary Johnson or Malik Jefferson role. He attends school at Westlake Village and is friends with 2018 signee Cameron Rising from the 7-on-7 circuit in California.

“I really liked the Rover position and how Todd Orlando likes to use the player,” Floyd said. “Texas is real high. The atmosphere and the fact I have family here makes me real comfortable on my visit. It felt like home.”

Floyd planned to stay in Austin through the weekend and built a bond with 2018 signee Ayodele Adeoye. The No. 3-ranked outside linebacker in the class doesn’t plan to commit until the early signing period and wants to take his official visits in the spring.