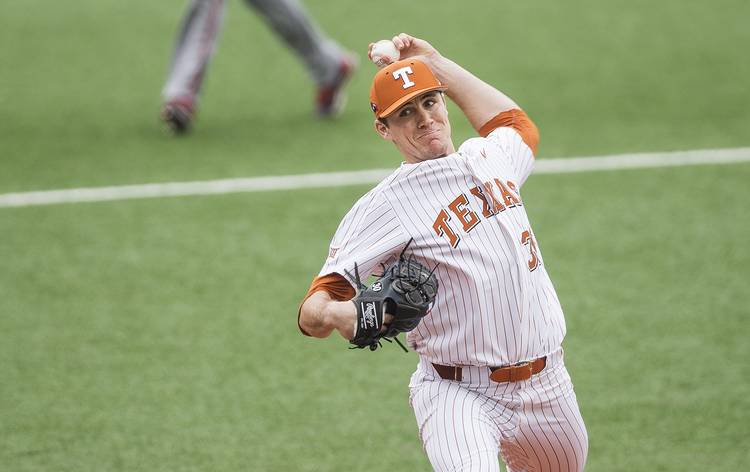 Texas pitcher Josh Sawyer (30) works against a Louisiana-Lafayette hitter on Feb. 18, 2018. Injuries sidelined Sawyer through much of the 2016 and 2017 seasons. NICK WAGNER / AMERICAN-STATESMAN

In between, the Texas junior pitcher underwent three surgeries for what he referred to as “freak” injuries. The Longhorns played 80 baseball games without him. Had he wanted to, Sawyer could have watched one episode of “The Office” — his favorite TV show — every day and gone through the entire series at least three times.

On that 659th day, however, Sawyer finally returned to the pitcher’s mound. He made a relief appearance in Sunday’s 2-1 loss to Louisiana-Lafayette, his first outing since he threw against Oklahoma State nearly two years ago.

“All I told him on the mound is just think about where you were last year, and he threw that smile on his face,” Texas coach David Pierce said. “It was awesome to see him really go out and compete and not have any hesitation. That was something we’re going to build on.”

Yesterday, after 3 surgeries and 659 days of waiting I toed the rubber again for The University of Texas. Thank you to everyone who supported me throughout the years, especially everyone involved with @TexasBaseball. Great series win and a lot more to come. #godisgreat #hookem

Following an all-state career at San Angelo Central, Sawyer arrived at Texas in 2014 and began living the dream he’d had since he watched the Longhorns play in the 2002 College World Series. After being sparsely used as a freshman, he made 11 starts in 2015. The next spring, he threw four innings of no-hit baseball in a scrimmage against UT’s alumni.

The start to Sawyer’s junior season was slowed by an ailing shoulder. The campaign eventually consisted of six games and six innings of scoreless relief.

A week after a two-out performance against Oklahoma State, Sawyer was injured while working in the bullpen at West Virginia. He tore a bicep tendon, which led to two surgeries. The following February, he suffered a labrum injury in his hip.

Naturally, Sawyer asked “Why me?” But he never thought about quitting.

“Getting back was the goal from day one,” Sawyer said last month. “My room was burnt orange growing up. I believe I was born to play here. I’ve loved this school since I was five years old.”

Besides, Sawyer said he felt that he owed something to UT since “they’ve spent a lot of time and a lot of money helping me out.” Following many months of rehab and bullpen sessions, he returned to the team for this past fall’s practices.

Sawyer admitted to checking out a few times as he worked to re-establish a routine on the mound. But he has studied film from before his injury and doesn’t think his mechanics have changed. He even added a change-up since his doctors didn’t want him rotating his wrist — and, therefore, not throw his curveball — while rehabbing the bicep injury.

“I do think I have another weapon to use this year,” said Sawyer, who also throws a fastball.

After a 659-day wait, Sawyer was called from the bullpen with two outs in the seventh inning on Sunday. He finished out the game for Texas, surrendering only a walk to a Ragin’ Cajuns team that hit .266 in 2017. He struck out three batters.

Sawyer relieved junior Andy McGuire, who was making a comeback of his own. McGuire sat out the past two seasons for non-injury reasons. McGuire allowed a hit and a walk over 1.2 innings, but that hit drove in the game-deciding run.

“Those upperclassmen, those older guys, needed to get on the mound and they definitely did their job,” UT junior Kody Clemens said. “It’s always good to see those guys back with the burnt orange on the mound.”

Pierce has stressed that Sawyer will have a prominent role in his bullpen this season, which continues Wednesday with a home game against Lamar. The 6-3 Sawyer is one of three Texas left-handed pitchers. How much he pitches will depend on how his body responds, but Sawyer said he felt fully healthy as he entered the season.

As for goals, Sawyer only had one.