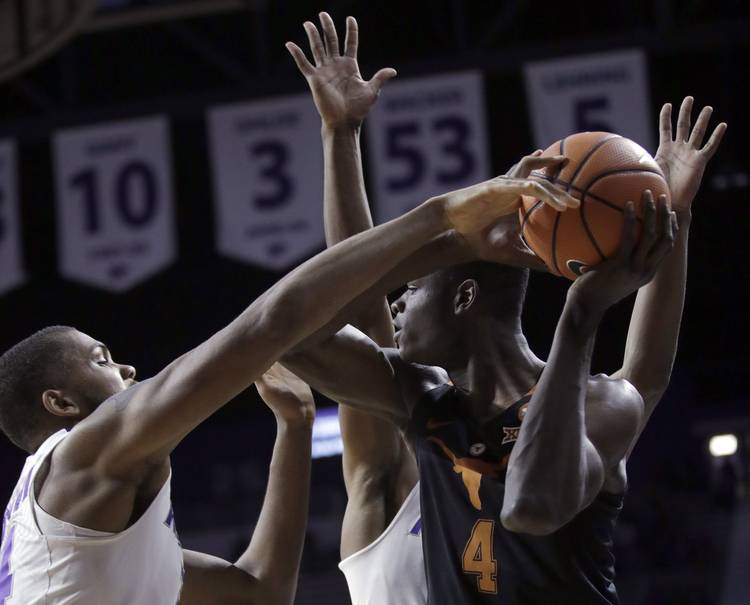 Father Merrin himself couldn’t exorcise the demons inside those godforsaken Nike threads. The Horns are now 2-5 all-time wearing black.

Blaming the jerseys only distracts from the real problem, however. This team, with its lackluster offense and inconsistent shooting, simply can’t save itself at serious make-or-break moments. Wednesday was yet another.

Texas shot a season-low 28.6 percent in the avert-your-gaze scene at Bramlage Coliseum. It’s the second-lowest total in coach Shaka Smart’s three seasons. The worst was that dreadful 26-percent shooting debut against Washington in China on Nov. 13, 2015.

“It’s tough to win when you shoot that percentage,” said Smart, who struggled to find the right words at times.

Kansas State fans are ready to run coach Bruce Weber out of Manhattan, and yet the Wildcats (20-8, 9-6) are now in the Big 12’s upper crust.

K-State won’t exactly go home crowing about this one. The Wildcats shot an equally-dreadful 28.6 percent in the first half. The game was tied 25-25 at halftime. The biggest cheer from the crowd of 8,623 was the halftime dance contest.

Barry Brown Jr. took over down the stretch for the home team. He scored on a wild layup over Roach and converted a three-point play. He later hit two free throws and scored again to give K-State a 55-46 lead. It was part of his game-high 16 points.

“My teammates were telling me to stay confident and stay in attack mode,” Brown said. “I just stayed in attack mode throughout the game.”

Smart would love for his players to think the same way. Mo Bamba attacked the Wildcats with a damaged left toe, an injury apparently suffered last Saturday against Oklahoma. Bamba simply wasn’t himself and finished with nine points and six rebounds.

“We didn’t know if he was going to be able to go at all,” Smart said. “I thought he still helped us at times, but we’ve got to get him healthy.”

Bamba walked out of the locker room and fist-bumped those standing in the tunnel. He kept shuffling to the bus. Other than Roach, no other players were made available. Most escaped out a back door, evading even UT personnel.

Dylan Osetkowski had 10 points and 10 rebounds, and Matt Coleman had 14 points. But there wasn’t too much else. Eric Davis Jr. was 1-for-8 shooting while Roach was 2 for 13. Jase Febres and Jacob Young were 0 for 3 combined. Jericho Sims was 3 for 3, but outside of dunks, he doesn’t give UT a ton of mid-range shooting.

The offense has crippled this team’s odds of winning this season. Think about what’s happened in recent weeks. Texas led by five with 1:25 left at Texas Tech and couldn’t close it out. The Horns missed 21 3-point shots in the first matchup with the Wildcats. UT shot 52 percent against TCU but gave up way too many easy baskets to win.

Sluggish starts to both halves cost Texas against Baylor. Smart said the team had enough gumption to get to overtime, but it’s easy to get motivated in OT.

The only two victories in February came against Oklahoma, a one-man show totally dependent on whether Trae Young is hot or not.

“We’ve been really inconsistent this year,” Smart said. “The games where we’ve been really solid on defense, tough-minded exciting our stuff on offense and taking care of the ball, we’ve given ourselves a really good chance.”

Asked about the possession where UT got four shot attempts, Smart was exasperated.

“We’ve got to jump up and make those shots,” he said. “That’s tough. All I can do is tell those guys. Be ready to shoot. Step into it with confidence. I think a lot of it is teammates encouraging teammates and helping teammates get the best shots they can. But it’s tough to win when you shoot that percentage.”

Tough to win. Tough to stay in the Big 12 race. Tough to make the NCAAs. Tough to do anything. No, it’s not the jerseys.