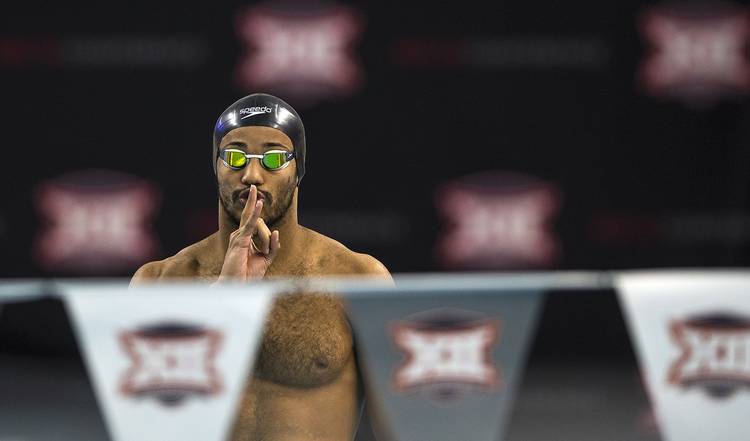 Brett Ringgold is full of fun facts to offer folks a playful glimpse of who he is.

The Texas All-American swimmer loves all things Batman. He’ll pull out his phone case to prove his point. It’s a miniature Batmobile, which even projects the Bat-Signal as a pen light. And while today’s kids probably only know sullen Christian Bale as Batman, Ringgold embraces the cheesier, old school stuff. Give him Adam West and Burt Ward and the Batman movie, circa 1966.

Here’s another fun morsel of information, although it’s a ton more serious than Batman. Ringgold is a senior aerospace engineering major. His career goal is to become an astronaut, whether it’s flying for NASA’s Deep Space Gateway program or a private venture like Elon Musk’s SpaceX.

The UT swim program has produced doctors, lawyers, coaches and businessmen. But he’d be the first astronaut.

Ringgold earned an internship at Lockheed Martin last summer and hopes to be hired by NASA this summer. He’s on schedule to graduate this December.

“I’m going to be the pilot — that would just be awesome,” Ringgold said this week. “The competition is really tough … The aerospace field is just growing. Now there’s plan for Deep Space Gateway, just opening up a lot of opportunities.”

But this week, Ringgold’s main focus is swimming. He’ll be going for his fourth straight Big 12 title in the 100-yard freestyle Saturday night at the Jamail Texas Swim Center.

Both the Longhorns men’s and women’s teams are decided favorites to win their respective league championships as they try to qualify as many swimmers as possible for next month’s NCAA meet. Saturday is the final session.

It would be the 39th straight conference title for the UT men, dating back to the old Southwest Conference days. The women are going for their sixth straight.

Ringgold has had to rearrange his training schedule so he can concentrate on a slate of spring semester classes that include applied orbital mechanics, flight dynamics and spacecraft system design. He has a lab and a class in British Literature to fill up all his time away from the pool.

If the Texas men are going to challenge for their fourth straight NCAA team title next month and 14th as a program, Ringgold needs to be super fast. The best NCAA teams sport reliable, if not dominant, sprinters who can vie for individual points and anchor a host of relays.

Ringgold swims the 50 and 100 freestyles and the 100 butterfly. He can swim legs on four of the five relays. His points are most needed in the freestyle. He’ll be a bonus in the butterfly to add to what Olympic gold medalist Joseph Schooling, a four-time NCAA champion, can score.

“Brett’s going to go better than he’s ever been, by a lot,” said UT coach Eddie Reese. “He’s going to have a great NCAAs this year.”

While at Texas, Ringgold has been a part of four NCAA relay championships. He was fifth last year in the 100 free and won the consolation final in the 50 free, while placing 12th in the 100 fly. His times at this week’s conference meet are just off his all-time bests. They’re expected to take a bigger drop for the NCAA meet, March 21-24 in Minneapolis.

However, to be better than he’s ever been, Ringgold has needed to carve out times to train around his academic schedule. Because of class requirements, he can only work out with his teammates on Fridays. From Monday through Thursday, he shows up for a 6 a.m. workout, then he’s back by himself at noon.

His scheduling always has be somewhat fluid. He and his three siblings, who grew up in Keller outside Fort Worth, were home-schooled by their mother, a former Air Force intelligence officer. He swam for a club team and was considered the second-best recruit in the state.

His competitive swimming career will end next month, no matter what happens at the NCAA meet. He has no desire to keep training in an effort to become an Olympian.

Reese, when asked about Ringgold, talked first about the senior’s professional future.

“He’s the kind of kid you hire for any job because he’ll find a way to get it done better than anybody else can do it.” Reese said. “He just, he’s a worker and he’s responsible and very, very team-conscious.”