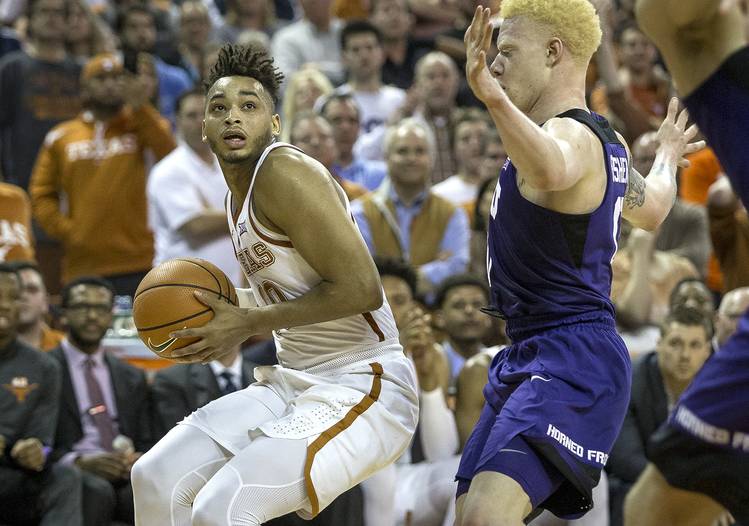 Junior guard Eric Davis Jr. was named as someone who allegedly received $1,500 from Christian Dawkins, who was working for prominent NBA agent Andy Miller and his agency, ASM Sports.

Other players received thousands more than Davis, according to the documents. However, Texas officials typically steer clear of any potential NCAA trouble. Davis will not play Saturday against Oklahoma State while UT conducts an internal review, the school announced. He’s averaging 8.8 points per game.

Prince Ibeh, who played at UT from 2013-16, was listed as someone who allegedly met with Dawkins, according to records obtained by Yahoo. Dawkins attempted to submit an expense form for a meal with Ibeh on March 1, 2015, from the Lava Café.

In a statement, Texas Athletic Director Chris Del Conte said he spoke directly with Davis and informed him of the decision. Davis was not made available to reporters on Friday, and his father, Eric Sr., could not be reached by the American-Statesman.

“Winning with integrity is paramount to Texas athletics, and we take these allegations very seriously,” Del Conte said in the statement. “We expect all of our programs to comply with NCAA rules, and every year we have all of our student-athletes sign forms attesting they will follow those rules.”

Del Conte said the school will “provide further updates when we have the necessary information to do so.”

Coach Shaka Smart said he first learned of the allegations late Thursday. “I had no previous knowledge of the alleged extra benefits described in the report,” Smart said in a statement.

“I am working with our athletic department staff and am prepared to cooperate fully with the investigation into this matter,” the coach said. “I am, and always have been, fully committed to ensuring that our program operates within NCAA rules. Our staff has always been very direct and thorough in educating our student-athletes about the specific parameters regarding agents.”

Both Davis and Ibeh were recruited by former UT coach Rick Barnes, who now coaches at Tennessee. “What I was told today by one of my GA’s was that happened — the money that I guess those guys received — happened after I left. That’s all I know,” Barnes told reporters in Knoxville, Tenn., on Friday.

On March 2, 2016, Dawkins had a meal at P.F. Chang’s with a person named Isaiah Taylor. The Longhorns had a guard with the same name from 2014-16, however school officials could not say for certain it was UT’s Taylor identified in the documents. Taylor’s name was not specifically mentioned in the Yahoo report.

It’s not an NCAA violation to meet with an agent. However, the agent is not allowed to pay for anything — like meals or travel. Taking money directly from an agent is an NCAA violation. Some players at other schools are accused of taking four- and five-figure loans from ASM Sports, according to Yahoo.

The UT connections are relatively minor in the larger story about the FBI investigation into possible corruption in college basketball. Yahoo reporters examined hundreds of pages of documents from the FBI’s three-year probe, which included more than 4,000 intercepted phone calls spanning 330 days, according to the report.

The potential NCAA infractions detailed by Yahoo’s report touched on 20 Division I schools at 25 current and former athletes. Nine people are facing criminal charges, and several of the game’s biggest coaches have seen their named dragged into the unfolding scandal.

“I know nothing more than you guys know, and that’s why there’s no reason to speak on it,” said Kentucky coach John Calipari, who denied having any relationship with Miller or his associates.

ESPN national college basketball reporter Jeff Goodman reported that he spoke to a lawyer who represented one of those already arrested. “He said this is just the appetizer,” Goodman said on ESPN.

Still, UT officials were taking their players’ involvement seriously, according to sources. Athletic department officials were gathering information and having internal discussions all day long as to how to react.

Former Texas star Kevin Durant pulled no punches when asked about the FBI scandal on Friday.

Durant said he can understand why “other stuff starts to happen” to college athletes, who aren’t paid like NBA stars.

“It’s too deep now,” Durant said. “We’ve been at this thing for a long time and this is a huge business now. It’s tough to stop.”

NCAA president Mark Emmert issued a statement in response to the Yahoo story and said the NCAA is committed to working with federal prosecutors.

“These allegations, if true, point to systematic failures that must be fixed and fixed now if we want college sports in America,” Emmert said. “Simply put, people who engage in this kind of behavior have no place in college sports. They are an affront to all those who play by the rules.”