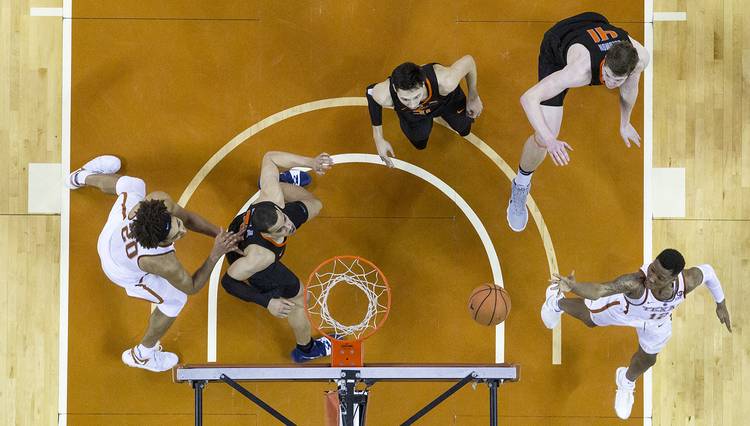 Icy conditions kept the Longhorns’ team plane grounded in Manhattan, Kan., late Wednesday. The team shuffled off to the Four Points Sheraton for another night after the disastrous 10-point loss to Kansas State. The pizza arrived about 1:30 a.m.

Dylan Osetkowski had only one thought.

“Damn,” he said. “That was tough, especially after that game, having to stay. After that game, we wanted a quick turnaround and focus on what we needed to do, and we did that.”

The Longhorns flew home midday Thursday and went straight to Cooley Pavilion for practice. A weekend matinee with Oklahoma State was nothing short of a NCAA Tournament gut check.

The next day, Texas learned it would be without guard Eric Davis Jr. By halftime, the Longhorns discovered they would be without Mo Bamba. And somehow on Saturday, they prevailed at the Erwin Center.

Kerwin Roach II watched his scoop layup go through the hoop with 1 second left as Texas grabbed a 65-64 victory. It was the exact same score these two teams put up in Stillwater, Okla., on Jan. 13, only the outcome was reversed.

“We needed it,” Roach said with a smile. “We need every win.”

The Longhorns (17-12, 7-9 Big 12) kept their NCAA Tournament hopes alive. The announced crowd of 12,316 sensed their importance in this one. Most fans in the lower bowl were standing and cheering as Texas erased a 10-point deficit and crawled back into it.

UT coach Shaka Smart called timeout with 18 seconds left. He simply wanted to draw up a play that got the ball into Roach’s hands. He dribbled out some clock. Dribbled some more. Then a little bit more. Finally, Roach raced down the left side of the lane and uncorked a right-handed layup attempt.

It was all part of Roach’s 12-point performance. Osetkowski had 13, and Jacob Young (12 points) and Jericho Sims (11 points) also finished in double figures.

Young, Sims, Jase Febres and James Banks III all had vital roles against the Cowboys. Smart had to use some lineups he probably wouldn’t use on a dare. But that’s how it went Saturday.

Davis was sidelined by UT officials as the school looked into a Yahoo Sports report alleging he took $1,500 from an agent. Smart said Davis has been advised to seek legal counsel before talking with UT compliance officials. The junior guard cheered his teammates on from the bench. It’s unclear whether he’ll play again this season.

Bamba played 15 minutes in the first half, but he was still bothered by the sprained left toe suffered a week ago. It clearly bothered him against Kansas State. The decision was made to sit him down at halftime.

“It wasn’t a hard decision,” Smart said. “You could tell by the look on his face he didn’t have it. We’ll have to evaluate him moving forward.”

Whether it was by necessity, intuition or sheer hope, Smart had the Horns go to a 2-3 zone. That made a huge difference. The Cowboys got open looks but only one shot on several possessions.

“We went into a lull when they went zone,” Boynton said. “We settled for a lot of jump shots, and that’s on me.”

Roach scored on a driving layup. Young flew down the court for another bucket. Roach hit a 14-footer, and Osetkowski scored on a turnaround in the lane. Matt Coleman’s baseline jumper gave Texas a four-point lead, and then Young got the ball in the left corner. He was wide open but hesitated. Normally a reserve, Young collected himself and swished a 3-pointer with 2:40 remaining.

“My preparation is really the same,” Young said. “I prepare myself for every game like I’m getting ready to play 40 minutes. That’s who I came up. Just stay ready.”

The Horns have to be ready for another quick turnaround. Texas will face No. 8 Kansas on Monday. It’ll be senior night at Allen Fieldhouse.

Based on the past four days, the Horns are probably ready for anything.