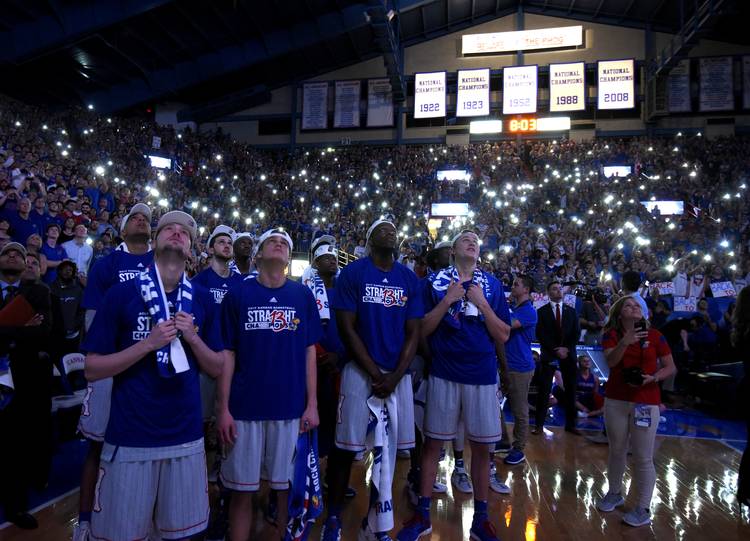 Members of the Kansas Jayhawks watch a video after clinching their 13th straight Big 12 Conference Championship title with a 87-68 win over the TCU Horned Frogs at Allen Fieldhouse on February 22, 2017 in Lawrence, Kansas. (Photo by Ed Zurga/Getty Images)

Kansas coach Bill Self should’ve reveled in last Saturday’s win over Texas Tech. The 74-72 victory helped the Jayhawks clinch a share of their 14th-consecutive Big 12 title, simply a mind-boggling sum.

“Well, we still need to take care of business on Monday,” Self said afterward.

When the Big 12 released the league schedule, a late February matchup between Texas and Kansas at Allen Fieldhouse on “Big Monday” had ESPN executives drooling. Now that Monday has arrived, the Longhorns aren’t anywhere close to full strength.

Three Longhorns who faced the Jayhawks in Austin on Dec. 29 likely won’t play. Andrew Jones played against Kansas and Iowa State before being diagnosed with leukemia. Eric Davis Jr. is likely to stay seated while UT continues looking into the allegations in the Yahoo Sports report.

RELATED: Preview: Texas at No. 8 Kansas

Freshman center Mo Bamba is doubtful with a sprained toe injury suffered against Oklahoma on Feb. 17. Coach Shaka Smart was surprised Bamba played against Kansas State, but Bamba lasted only one half Saturday against Oklahoma State.

If current patterns hold, Bamba is likely to test his foot during Monday’s shoot-around and then see how it feels in pre-game warmups.

Do not underestimate the importance of the venue. Jarrett Allen, another one-and-one Longhorn, was super motivated last season in Lawrence. He wanted to put on a show and tallied up 22 points and 19 rebounds.

Winning in Lawrence is tough enough. Take away three vital cogs, and the Longhorns (17-12, 7-9 Big 12) face even greater obstacles.

From an NCAA Tournament perspective, a win would be heavenly. However, a loss isn’t necessarily a world-ender. Texas’ regular-season finale at home this Saturday against West Virginia will be key, though.

“We’ve got to go out there and let our hair down, attack and be aggressive,” Smart said Saturday. “They’ve got a great team. it’s senior night for them. They’re going to be very motivated, but you know what? We’ve got guys that can make plays, too.

“If our guys can be connected, stay together and attack, play with a clear mind, that gives you a chance any time you take the floor,” he added.

This was supposed to be the year the Jayhawks (23-6, 12-4) lost their place atop the league standings. The rugged Big 12 would topple the longstanding giants. Allegedly.

It was close. KU’s 2014-15 squad had five conference losses, but Self’s program typically had no more than two or three in this decade-plus run.

Veteran guard Devonte’ Graham said this year’s title was even more special. “It means a lot because of all the people who doubted us,” Graham said after the Tech win. He scored 18 of his 26 points after halftime.

“I feel like this year was the year that everyone thought we were going to lose it,” Graham said. “We kept battling and stayed positive together. We kept grinding and made history in the end.”

The Jayhawks had quite the party in the visitors’ locker room at United Supermarkets Arena.

“It was just excitement with everyone jumping around and spraying water on everyone,” Graham said. “We knew we had been grinding all season, and we proved people wrong so it was a good feeling.”

Now, the Jayhawks want to finish off it of so there’s no chance of sharing that feeling. The Longhorns are the ones standing in their way.

“We played them here close, and they made some tough shots,” UT guard Kerwin Roach II said. “But I feel if we just stay together, play good defense, play good offense, it should be a good game.”

The top offensive performers from The Opening regional in Houston