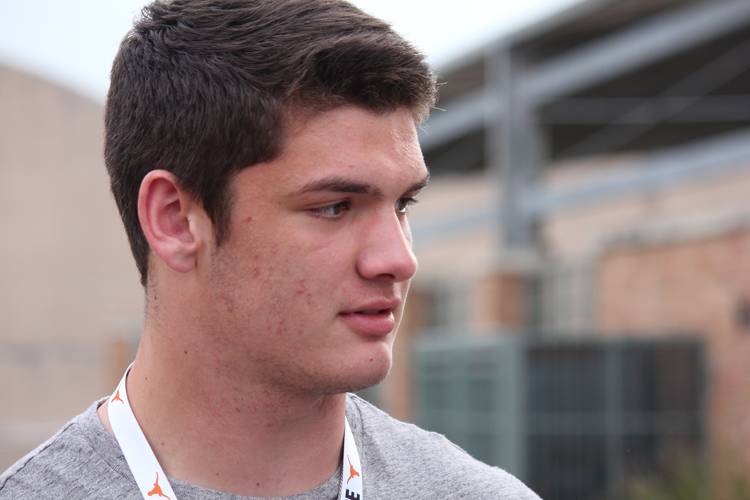 The Opening Regional in Houston takes place Sunday and around 10 of the expected attendees already hold Texas offers. The group, which includes prospects like Kenyon Green, Marcus Stripling and Marcus Banks hope to solidify their position as elite targets and earn a trip to The Opening Final in Oregon this summer.

The showcase allows under-the-radar prospects to open eyes. Wide receivers Brennan Eagles and Tommy Bush exploded after a strong performance at this event in 2017. Another crop of soon-to-be-seniors hopes to repeat that success.

Here is a name with potential to improve recruiting stock with a strong showing on Sunday.

Texas already holds its quarterback commitment in the 2019 class with 4-star Roschon Johnson of Port Neches-Groves already committed. If Texas decides to take a second quarterback in the class, Gipson wouldn’t be a bad option. He plays at the same school that produced 2018 signee Keondre Coburn. Gipson is a better passer than he’s given credit for and he’s an elite runner.

Manvel is never short on talent and Owens started to build a reputation as a reliable running back during the 2017 playoff run. His role will continue to grow as a senior. He’s a big-bodied running back with enough speed to threaten defenders. He’s also a quality receiver out of the backfield. Owens rushed for 714 yards and 12 touchdowns, adding 13 receptions in 2017.

McCormick is listed as a running back and spends most of his time at Judson in the backfield, but a move to slot receiver is likely in the cards when he transitions to college and The Opening regional will give him an opportunity to showcase his hands. McCormick rushed for 1,211 yards and 13 touchdowns as a junior. He could emerge as an elite slot receiver in the 2019 class.

Compton is already viewing the improvements offered by IMG Academy. The former Texan was recently at Texas junior day and already holds offers six offers and is sure to see more attention with the spotlight at his new school. Originally from Cypress, Compton is back in town to compete at The Opening and showoff the 20 pounds he’s gained since moving to Florida. He holds a Houston offer.

Brown impressed during a playoff loss to Lake Travis and quickly became a hot commodity along the offensive line. He’s played offensive tackle in high school, but projects as a guard at the college level. The first-team all-district selection is the younger brother of Baylen Brown, who played at Texas Tech. Brannon is a big-bodied guard with solid feet and good upper-body strength. TCU is also in the mix.

The 3-star prospect might be approaching a Texas offer. He’s raw, but oozes with athleticism and potential. Mpagi will remind Texas fans of recent signee Joseph Ossai of Conroe Oak Ridge. Mpagi can play defensive end or standup as an outside linebacker. He already holds 10 offers based on his potential growth at the position.

White isn’t ranked on 247Sports Composite despite an early Baylor offer. The Cypress Fairbanks area is growing with football talent and Texas signed Christian Jones from nearby Cy Woods in the 2018 recruiting class. White is a fast, aggressive linebacker who lives near the football. His lack of height hurts him as an outside linebacker prospect, but he possesses the skills to gain weight and move inside. Fast linebackers are in vogue and White can run.

Texas cleaned up at Houston Lamar High School in the 2018 recruiting class. The Longhorns signed a trio of elite prospects during the early signing period. Hogan is the next player in the Houston Lamar secondary to earn college interest. The 3-star was offered by Louisiana-Monroe, Iowa State and Minnesota in February. Hogan is a long cornerback who can cover in 1-on-1 situations and run with most wide receivers. He’ll need to add weight before college.

Facing Big 12 champion Jayhawks, Longhorns should ‘go out there and let our hair down’