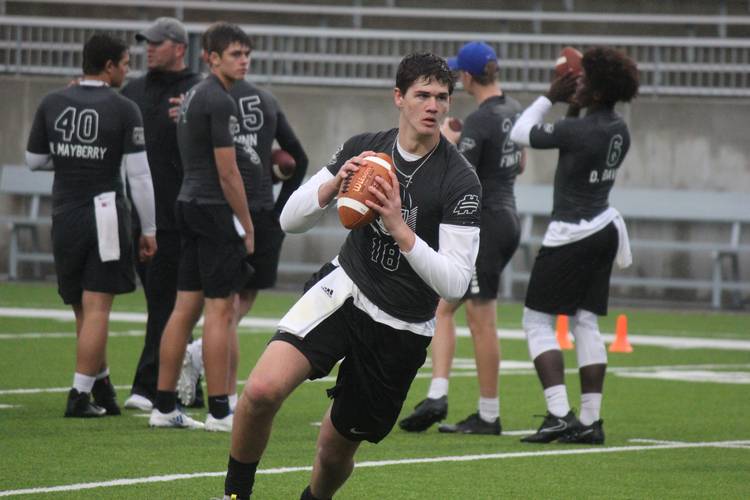 Texas hosted its first regional for The Opening on Sunday at Legacy Stadium in Katy despite constant rain and less than ideal conditions for a camp set up to test players in a combine-like circuit and in 1-on-1 settings. More than 100 prospects participated in the event.

The standouts included some of the elite names in the 2019 class, as well as an up-and-coming slot receiver and a sophomore running back destined for 5-star status. Here are the best performers from each position on the offensive side of the ball.

Gunnell is perfectly suited for camp settings because of his big frame and strong arm. His lack of mobility doesn’t come into play without a pass rush in his face, allowing him to showcase his technique and accuracy by firing darts around the field. Gunnell is the most polished quarterback in Texas this cycle and recently de-committed from Texas A&M. Oklahoma State is now the favorite.

There wasn’t a ton of talent represented at the running back position, specifically in the 2019 class. The star of the day was sophomore Zachary Evans, a five-star prospect who lists Texas and Alabama as his favorite two schools. Evans posted the best SPARQ score of the day, which is a measurement in drills combined with height and weight. Evans is the best running back in the state, regardless of classification, and he showed why again on Sunday.

Oklahoma found a special tight end in Austin Stogner, who caught nearly every ball thrown his way Sunday. The four-star is a matchup nightmare for defenders because of his length. He can box-out defenders like a basketball player to secure the football. Stogner catches with his hands and runs precise routes. He cemented his place as the top tight end in Texas during the 2019 cycle.

The surprise of the day was Ainias Smith, a slot receiver who can also play cornerback. Smith bested some of the top secondary prospects in the state like Bobby Wolfe and Marcus Banks. His lone reported offer is Georgia, but that will change after his performance in Houston. Smith was named the event’s MVP at wide receiver and showed the quickness needed to become a coveted slot receiver.

Shepherd was the best offensive lineman at an event that included names like Kenyon Green, Brannon Brown and Andrew Coker. Shepherd is large and pushes around smaller players with his size and strength. The big man can also move and did a good job staying with speed rushers. Shepherd owns an offer from all the top programs with Texas, Texas A&M and Oklahoma currently battling it out for his commitment.

Facing Big 12 champion Jayhawks, Longhorns should ‘go out there and let our hair down’

The Dotted Line: Texas targets shine during The Opening regional in Houston