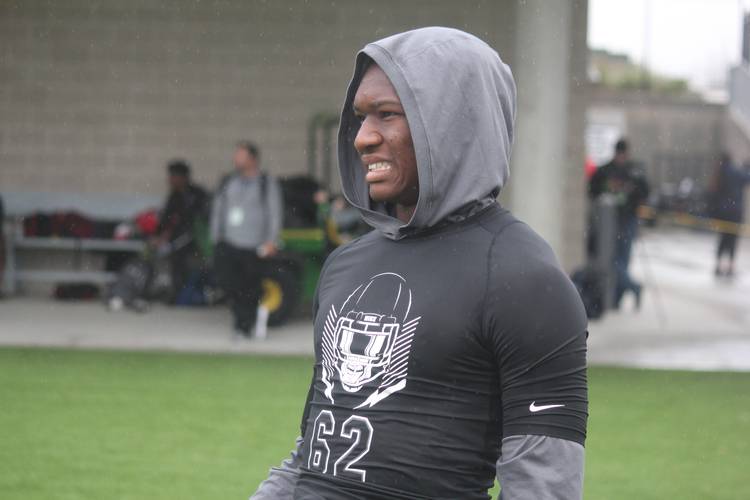 The driving rain during The Opening regional at Legacy Stadium in Katy on Sunday helped the defenders more than the offensive players. These showcases don’t spotlight defensive tackles or linebackers as much as athletic defensive ends and defensive backs. The Longhorns are in the mix for a few of the top performers at the camp:

Stripling dominated most of his 1-on-1 reps during the event. He’s not quite a defensive end and not quite a defensive tackle, but he’s a football player who brings a competitive streak even to camp settings. Striping is quick off the football and uses his hands well. He recently visited Texas and Texas A&M. He holds offers from most of the elite programs.

Mpagi is an athletic defensive end who could play outside linebacker in some schemes. He’s a pass-rushing specialist built in the mold of Joseph Ossai, who signed with Texas in 2018. Mpagi showed athleticism and a big frame in Houston, winning most of his 1-on-1 battles. Texas is in contact with Mpagi, who holds 11 offers.

Houston Lamar is known as DB High for a reason. The school produces cornerbacks and Hogan proved at The Opening regional he’s next. Hogan loomed in the shadows of UT signees Anthony Cook and D’Shawn Jamison. He announced his arrival onto the recruiting scene with a defensive back MVP performance in Houston.

Banks is a technician and he reminds me of 2018 Texas signee Anthony Cook because he isn’t the biggest, fastest or longest cornerback on the field, but might be the most effective. He rarely takes a bad step and possesses the makeup speed needed against elite competition. Banks moved his commitment date back to take more time and Texas is squarely in the mix for the top-rated cover corner in the state.

Morris is a big, long safety with coverage skills. The physical part of the game isn’t spotlighted at camps like The Opening and Morris prides himself on helping against the run. He did show good quickness in coverage and the strength to jam receivers and tight ends. Texas is one of Morris’ 19 offers and he visited Austin for junior day.

The top offensive performers from The Opening regional in Houston