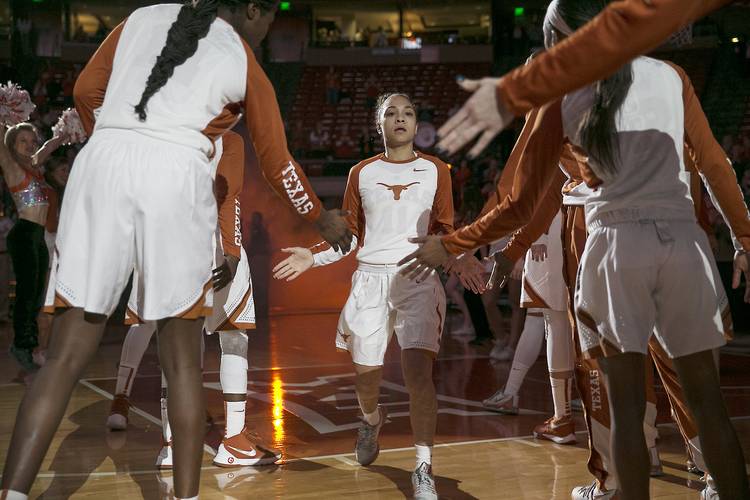 Texas' Brooke McCarty is introduced prior to the game. The Texas Longhorns played host to the Oklahoma Sooners in a Big 12 game at the Erwin Center in Austin, TX Saturday January 23, 2016. coming away with a hard fought 83-76 victory. (RALPH BARRERA/ AMERICAN-STATESMAN)

Brooke McCarty and Ariel Atkins were exhausted and feeling sorry for themselves when they had an early-morning chat during their freshman season.

It was 3 a.m. when they huddled inside a cramped dorm room at Jester Hall with fellow freshmen Tasia Foman and Diani Akigbogun. Under Karen Aston’s watchful eye, UT practices were grueling and the freshmen were having trouble with the faster pace and nuances of college basketball.

“We didn’t even know if tomorrow was going to come,” Atkins recalled on Monday. “We were crying just looking at each other. By the time it was 3:30 we started to laugh because we realized the next practice was at 6:00.”

Atkins and McCarty, now seniors, giggled when they retold that story. Both agreed that their “special bond” was formed that night inside Jester back in 2014, when they felt lost and confused and wondering when things would improve.

Four years later, McCarty and Atkins are as tight as sisters. On Tuesday night they’ll join teammate Audrey-Ann Caron-Goudreau on Senior Night at the Erwin Center when the No. 7-ranked Longhorns play rival Oklahoma in the final regular-season home game of their careers.

“Coming out of high school (in League City), point guard was a very tough position to play,” said McCarty, who chose to attend Texas after giving LSU serious consideration. “By the time I thought I had it all figured out, it turned out that I absolutely knew nothing.”

McCarty, though, was a quick study. She earned Big 12 player of the year honors last year as a junior, joining Atkins on the all-conference first team. Texas has gone 103-30 in their four seasons and have led Texas to four straight 20-win seasons and three Sweet 16 appearances, including an Elite Eight in 2016.

In those four years, Texas has emerged as a perennial top-10 team, one that still aspires to reach this year’s Final Four.

Aston, in her sixth year at Texas, recalls those early rough patches when McCarty and Atkins — who arrived as McDonald’s All-Americans — weren’t the players that fans recognize today.

“There was a reality that this wasn’t going to be as easy as they thought it would be,” Aston said. “No freshman has fun. There were moments that it was slapping them in the face. You could see, though, that one day they would be able to breathe and say ‘we’ve got this.’”

Their legacy as players who uplifted Texas to national prominence is secured.

McCarty ranks 17th on UT’s all-time scoring list with 1,531 points and is third in three-pointers made with 231. Atkins is 23rd in career scoring with 1,387 points and third in free throw shooting with a career average of 83.0 percent.

“They came here with intentions of doing things and they have done them, individually and collectively,” Aston said.

Caron-Goudreau, a native of Gatineau, Quebec, also has made her mark as a defensive specialist in the paint. She has started 26 of her 50 games since arriving last season and holds career averages of 4.3 points, 4.0 rebounds and 1.2 blocks per game. She’s missed the last four games with a wrist injury.

Atkins and McCarty became fast friends even before they enrolled. After competing against each other in AAU competition, they joined the same club team, Cy-Fair Nike Elite, and toured the nation together before becoming Longhorns.

“It’s crazy to think Brooke and Ariel were freshmen just the other day,” said Lisa Garrett, McCarty’s mother. “Both are eager to see what the next level brings.”

After they graduate in May, McCarty and Atkins plan to play basketball overseas and in the WNBA. Caron-Goudreau plans to continue her education in graduate school, probably in Canada. She also is preparing to play her final game with twin sister Khaléann, a junior forward.

Aston said all three of her seniors have consistently been the team’s hardest workers in practice.

“The best thing I can say about these guys is that they hit the ball out of the park for the way they represented Texas,” Aston said. “They’ve set themselves up for great careers beyond Texas because of the way they handled their business here.”