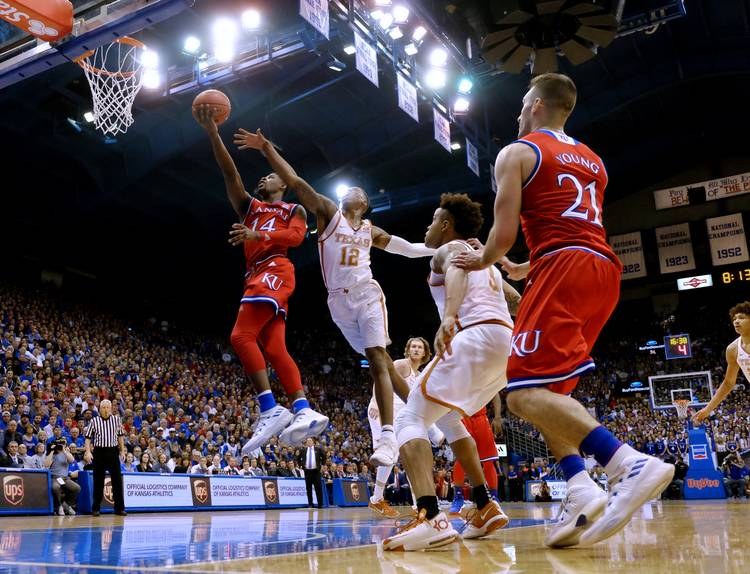 Malik Newman #14 of the Kansas Jayhawks lays the ball up against Kerwin Roach II #12 of the Texas Longhorns in the first half at Allen Fieldhouse on February 26, 2018 in Lawrence, Kansas. (Photo by Ed Zurga/Getty Images)

LAWRENCE, Kan. — When the horn sounded late Monday, arena personnel started hauling out multiple tables, lining them smack dab in the middle of Allen Fieldhouse. As it turns out, 14 Big 12 championship trophies take up a lot of space.

Texas coach Shaka Smart got an eyeful of Kansas’ achievements when he went to center court for a post-game radio interview.

“It was cruel and unusual punishment,” Smart said. “I had to walk through their celebration.”

Sixth-ranked Kansas took advantage of an undermanned Texas lineup and notched an 80-70 victory on Monday to seal the program’s 14th straight league title.

The Longhorns (17-13, 7-10 Big 12) had only 10 players dressed, and none of them were named Mo Bamba, who was back in Austin with a sprained toe. None of them saw the post-game scene, either — a stunning visual reminder how the Jayhawks (24-6, 13-4) dominate this league like no other.

“You see all the trophies lined up next to each other,” Smart said before stopping and just shaking his head. “I keep going back to the word; it’s just unique. You look at other big-time leagues, and you just don’t see that.”

While Kansas is cruising into the postseason, Texas is battling tooth and nail. Saturday’s regular-season finale against West Virginia at the Erwin Center is likely a NCAA-or-bust matchup for the home team.

Most prognosticators currently have Texas projected as 10-12 seed, most likely in the play-in game staged in Dayton, Ohio. That’s as close to the bubble’s backside you can be and still be in the field of 68.

The Horns finished last in the Big 12 last season. The school has not missed the tournament in back-to-back years since 1987-88.

“Just go out there and play basketball,” UT guard Kerwin Roach II said. “That’s all it is at the end of the day. West Virginia, they’re an up-and-down team. You want to get up-and-down. So it’s going to be a good game.

A week off might not be enough for Bamba. Smart said trainers are “still evaluating exactly what the diagnosis is.” They know it’s a sprained toe. He could barely walk after Kansas State. The pain was great enough to keep Bamba out of the second half of last Saturday’s game against Oklahoma State.

“Obviously, we’d love to get him back out there, but we have to do the right thing for him and to make sure that he heals up,” Smart said. “I guess the status is day-to-day.”

The Jayhawks were sure disappointed the 6-foot-11 freshman didn’t make the trip.

“I think we wanted to take every team’s best shot,” Kansas guard Svi Mykhailiuk said, “so we all were a little disappointed he didn’t play against us.”

Kansas coach Bill Self acted like it was no big deal, as if taking away the Big 12’s best shot blocker had no affect on anything.

“You guys (the media) dissect everything so much,” Self said. “So we find out at 1 o’clock that he’s not going to play. That doesn’t change anything. Other than throw the ball inside to Doke.”

Oh, Kansas did that plenty. Udoka Azubuike had a field day without Bamba there to keep him honest. Azubuike had 20 points and was 10 for 11 shooting. Many of those were two-handed slams where it looked like Azubuike was trying to dunk it as hard as he could.

The Horns could have easily mailed this in and start preparing for the Mountaineers. But they didn’t. Not by a long shot. Not having Bamba was tough enough. Eric Davis Jr. was held out again as UT compliance officials look into whether he took $1,500 from an agent, as alleged by Yahoo Sports.

Roach had 18 points, eight assists, lost a shoe at one point and his pre-game meal, too. With about two minutes before halftime, Roach walked off the floor, covered his mouth and headed for a nearby trash can. “It was some raviolis,” Roach said. “I felt way better afterward.”

He felt ecstatic about the team’s overall performance, too.

Jacob Young set new career highs in a slew of categories including field goals (six) and minutes (36) and tied his career best with 14 points. Jericho Sims got a career-high 36 minutes and tallied up 12 points and eight rebounds. “That’s why I love my brothers,” Young said. “We fought. I know they’re going to fight to the end.”

“Everybody stepped up and fought, as you can see,” Roach said. “A lot of people stepped up today. I have no complaints about our effort today or our fight. All the odds were against us today.”

It was a six-point game with 5:42 remaining, but Kansas being Kansas, the Jayhawks put it away. They improved to 37-1 in home games on ESPN’s “Big Monday.” That helps you win a lot of trophies.

“All I can say is phenomenal coach and coaching staff,” Smart said of Kansas.