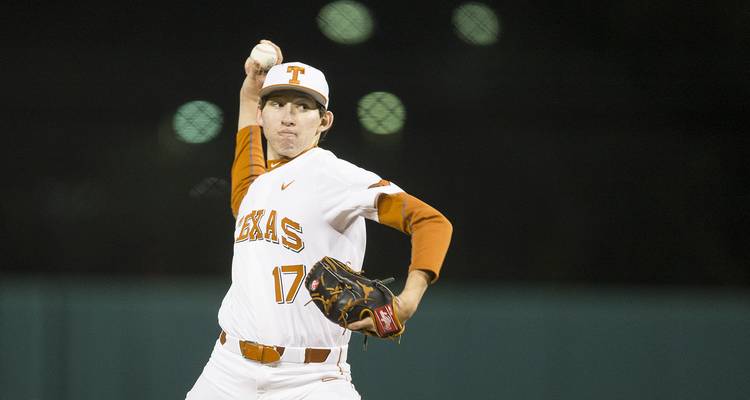 After a weekend on the road, Texas’ Longhorns returned home to a win on Tuesday night.

Freshman Nico O’Donnell anchored a one-hitter against his hometown team, and Texas opened a nine-game homestand with a 2-0 victory over UT-San Antonio. Texas (5-3) will play Northwestern four times this weekend before hosting a four-game set against Stanford next week.

UT improved to 4-1 at UFCU Disch-Falk Field after dropping two of the three games it recently played at LSU.

“Starting a homestand, we feel like it was real important to get this first one,” Texas coach David Pierce said. “We scored enough and had good pitching and, for the most part, solid defense.”

O’Donnell was stellar in the second start of his collegiate career. A San Antonio-raised right-hander, O’Donnell walked the second batter he faced on Tuesday. O’Donnell, however, went onto allow only two walks and a two-out single up the middle in the fifth inning.

Over the course of an 84-pitch outing that ended with one out in the sixth inning, O’Donnell struck out four Roadrunners.

“I was talking to Coach Pierce in between innings in the dugout and the major focus is just keeping that ball down,” O’Donnell said. “I know, first inning, it soared up a little bit. Once I got those fastball, slider, curve down there, it started working pretty well.”

Texas relievers Bryce Verplank and Beau Ridgeway helped maintain O’Donnell’s one-hitter. Staff ace Nolan Kingham then finished off the Roadrunners with a 14-pitch ninth inning. UTSA (2-5), which entered the game with a .218 batting average, was shut out for the third time in 2018.

“That’s we’re trying to do, get some guys jump-started,” Pierce said.

Pierce said he usually works his Friday starter out in the bullpen during the ninth inning of games played on Tuesdays, but he decided to use Kingham to close out the Roadrunners. Kingham, who picked up his third career save, will likely have this weekend’s start against Northwestern moved back a day.

Around the bases:  Texas recorded eight hits, but both of the runs it scored against UTSA were credited as unearned. … Outfielder Austin Todd missed his second straight game with a thumb injury. … One year after he stole 21 bases at Panola College, sophomore outfielder Duke Ellis swiped his first two bases as a Longhorn. … Senior utility player Jake McKenzie was among the seven UT athletes who received the Dr. Gerald Lage Academic Achievement Award on Tuesday. Athletes must own a GPA of at least 3.80 at the time of their nomination for the Big 12’s highest academic honor. McKenzie, who is currently shelved with a shoulder injury, is studying petroleum engineering.

On Senior Night, Brooke McCarty and Ariel Atkins shine in victory over OU