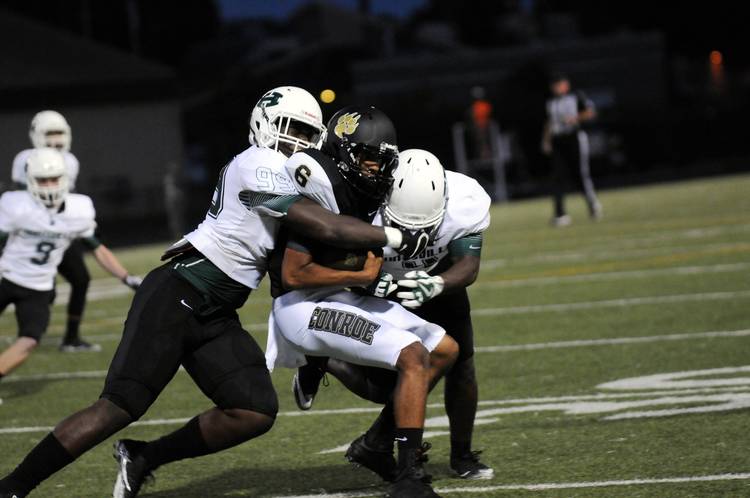 “I’m excited T’Vondre has made the decision to join a program like Texas and am looking forward to watching him develop into a great player,” said Huntsville High School defensive coordinator Scott Schroeder. “I feel he has the potential to make a huge impact for UT.”

Skill set: Sweat is a big-bodied defensive end who excels against the run. He can handle double-teams and overwhelms most prep offensive linemen with his sheer strength and quickness off the ball. Sweat is excellent at holding the point of attack and is one of the most physically ready defensive ends in the state. Sweat is the No. 49-ranked strong side defensive end in the class, per 247Sports Composite, but expect him to shoot up rankings with the amount of recruiting attention he garnered from the top programs in the country.

“With his size, he is incredibly athletic and has superb strength at the point of attack,” Schroeder added. “He is young for his grade so his physical development will be off the charts. He can rush the passer, drop into pass coverage and play the run.”

Sweat is not just a run stuffer. He can also get after the passer and is athletic for his size. Sweat won’t likely be a double-digit sack player from the edge, but he does offer the ability to rush the quarterback and get into the backfield. His first step is impressive and he’ll improve as a pass rusher as he learns new techniques.

Immediate impact: Both Omenihu and Roach will be graduated by the time Sweat steps on campus, giving him an opportunity to compete for playing time as a true freshman. He’ll compete with players like 2018 signees Daniel Carson and Mike Williams. Sweat is a big, strong junior who will only get physically bigger before enrolling on campus. It’s a long way out before Sweat needs to worry about earning college spots, but he’s the type of player who can find a role early in his career because of his physicality.

Fitting into the program: The Longhorns are carving out success in East Texas. The Longhorns snagged Keaontay Ingram and DeMarvion Overshown in the 2018 class. Sweat represents another win in an area normally known as Aggie country. Texas defensive coordinator Todd Orlando wants big-bodied defensive ends who can free up linebackers to make plays. He won’t be considered an elite defensive end because of his lack of height and pass rushing ability, but those traits aren’t necessary to succeed at the 4i position in Texas’ scheme.

“T’Vondre is a hard-worker and very competitive,” Schroeder said. “He has position flexibility with his athleticism so we feel his upside and potential are great.”

Recruiting at the position: Texas wants to sign five defensive linemen in the 2019 class, meaning four spots remain available. Two of those spots will likely be reserved for defensive tackles. The top player on the board at that position is DeMarvin Leal of Converse Judson. The Longhorns need to identify three other targets worthy of scholarships. Some of the current targets include Marcus Stripling, David Ugwoegbu, Braedon Mowry and NaNa Osafo-Mensah.

Spotlight is on quarterbacks at the NFL combine, but keep an eye on those six Longhorns, too