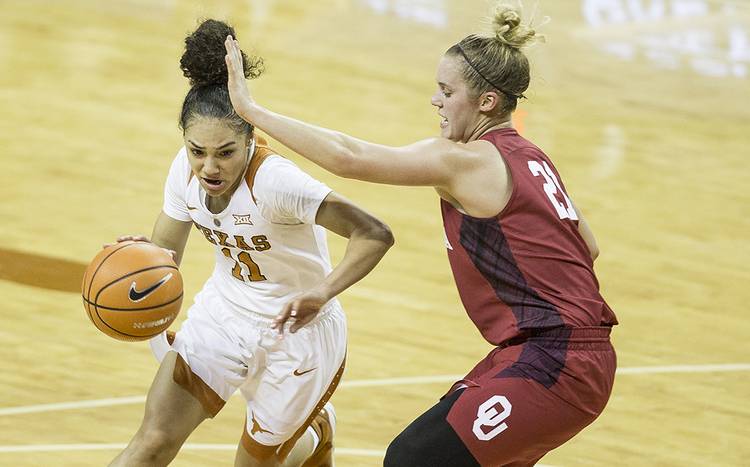 By the time Cindy Deville finished a stirring national anthem, Brooke McCarty had to wipe away tears.

McCarty was clearly emotional as she watched her grandmother sing on Senior Night. Moments later Ariel Atkins and the rest of the Longhorns surrounded the 5-4 point guard. They appeared in awe as Deville nailed the anthem just moments before Texas played the final regular-season home game Tuesday night against Oklahoma.

Roughly two hours later, McCarty and Atkins were all smiles as No. 7 Texas defeated OU 79-66 in a Big 12 game.

Texas will open the tournament against the winner of Friday night’s game between Iowa State and Texas Tech. Game time is 6 p.m. Saturday at Chesapeake Arena.

As always, the Longhorns were led by their guards. McCarty, Atkins, Lashann Higgs and Sug Sutton combined for 57 of their 79 points.

Much of the post-game conversation centered on Deville’s performance.

“She did that my senior night in high school,” McCarty said. “I kind of thought she was doing that tonight but I

didn’t know. There’s a lot of emotions that go into senior night, but it was easy just to transfer

that onto the court and just play with my teammates and get them going.”

McCarty regained her composure before tipoff. She finished with a team-high 17 points, hitting three buckets behind the three-point arc. Higgs, who scored 25 points in the Texas-OU game in December, chipped in 16 points and Atkins added 15.

Both coaches agreed that UT’s 10-1 scoring spurt in the final 1:30 of the second quarter was pivotal. Locked in a 30-30 standoff, Texas take a 40-31 lead into the locker room at the break.

Karen Aston said her team has a “good vibe” as the Longhorns prepare for post-season play.

“I’m really proud of our team because they’ve looked straight ahead,” the coach said. “They haven’t let any disappointment get in the way of what’s next. … I think that’s a direct of our leadership. These two guys (McCarty and Atkins) sitting beside me (at the press conference) would not let our team get too high or too low. One of their mantras all year long was to take it one day at a time.”

As for Oklahoma, the Sooners (16-13, 11-7) appear to be on the so-called bubble for making the NCAA Tournament. Sherri Coale, though, said her team should be included in the 64-team field, adding that the Sooners have had one of the most demanding schedules in the country.

played all those guys (Oregon, Connecticut, South Dakota State, and DePaul) in November and

December and it prepared us and it forced us to grow up,” Coale said. “Guess what my guys learned? They

learned that the outside noise doesn’t have to have any value. You guys have been talking about the tournament for a month and my team hasn’t.”

Texas made a surprising move Tuesday, putting reserve forward Jordan Hosey in the starting lineup. It was the second start of the season.

Aston said Hosey was a good matchup against OU because the Sooners use a four-guard lineup. Hosey’s quickness and aggressiveness helped the Longhorns force 18 Oklahoma turnovers. Texas had a 22-9 scoring edge in points off turnovers.

Aston said the future will be tough when Atkins and McCarty graduate.

“They’ve helped us recruit other great players,” Aston said. “That’s another selfless thing about these two. … They’re not caring about just themselves. They’re the kind who will come back and impact players who come after them.”

Led by freshman Nico O’Donnell, Texas opens a lengthy homestand with a one-hitter of UTSA

The Dotted Line: Texas is already set at quarterback for the 2019 class