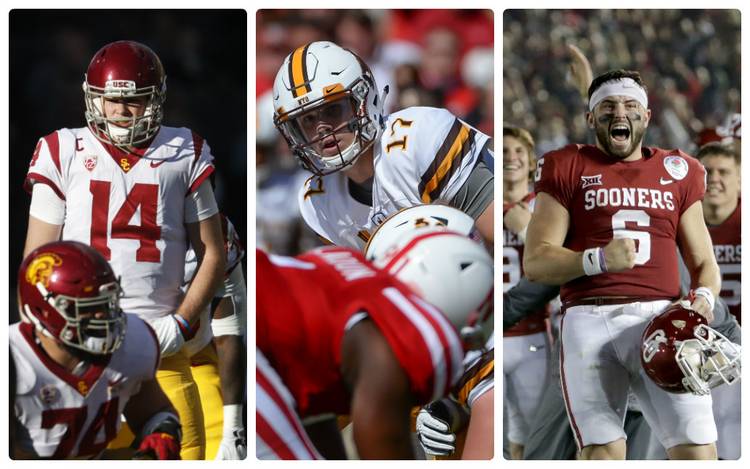 Quarterbacks always are the rock stars of the NFL draft.

A handful of them will be sucking the attention away from everyone else this week as the annual NFL scouting combine convenes in Indianapolis. The first group of players, including offensive tackles Connor Williams of Texas and Oklahoma’s Orlando Brown, will begin doing team interviews and some of the skill tests starting Thursday.

But the quarterbacks will be the darlings of the drills at Lucas Oil Field Stadium. Some are likening the depth of this year’s quarterback group to the 1983 draft class, which produced six first-rounders, including future NFL Hall of Famers John Elway, Jim Kelly and Dan Marino.

Will Wyoming’s Josh Allen be the top pick of the draft? Or will it be Southern California’s Sam Darnold, who’s involved in a crosstown rivalry with UCLA’s Josh Rosen.

There’s also Oklahoma’s Baker Mayfield, the reigning Heisman Trophy winner. And Louisville’s Lamar Jackson, the 2016 Heisman winner, is vying for a first-round slot, too, along with Oklahoma State’s Mason Rudolph.

Conventional wisdom has Darnold as the first quarterback off the board, but there is much intrigue regarding Mayfield.

Scouts don’t appear to be bothered by his height (he’s only 6 feet tall) or that he excelled in a “system” offense.

Rather, NFL general managers and head coaches will be interviewing Mayfield to see whether he’s merely super competitive or a walking-talking troll. Quarterbacks typically are the millionaire faces of franchises, but Mayfield has a history of poor on-field sportsmanship — think games against Ohio State, Baylor, Kansas and Georgia — that brings him negative attention.

“His tape is really good. He’s close to a 70 percent completion guy. I’m not too worried about him being 6 (feet tall) or 6-1, even though there is a very small percentage of those quarterbacks (in the NFL),” Mayock added. “I think it really comes down to off the field, face-to-face in the meeting rooms with the decision-makers (as to) whether or not you’re going to buy into his character and him being the face of your franchise.

“I think there are going to be some teams that say, ‘No, I’ve seen some talent, but it’s not my guy.’ I think some other teams are going to say, “No biggie, maybe some emotional competitive immaturity, but outside of that I’m good.’ “

In the end, Mayock said, Mayfield’s NFL future may rest on “whether or not a team can look him in the eye and say, ‘Yeah, that’s my guy. That’s the face of the future for my franchise.’ ”

With the scouting part of the draft just hitting its stride, Mayfield looks to be the logical choice as the first Big 12 player and first native Texan to be selected by an NFL team on April 26. Williams, the offensive tackle from UT, also could be a first-rounder, but his draft stock could best be described as fluid. He missed much of last season with a knee injury.

Mel Kiper, ESPN’s long-time draft analyst, said Williams was his final cut from the first-round mock draft he published last week. Kiper said he favored Brown, who like Williams, gave up his final season of college eligibility to turn pro.

“I went with Brown because he’s a right tackle, he’s a mauler, he’s a road grader,” Kiper said last week.

He described Williams as destined to be a left tackle/guard.

Yet Rob Rang, an analyst for NFLDraftScout.com, is projecting Williams as the top tackle available in the draft. He wrote: “When healthy, Williams is a bit of a throwback, showing the power and aggression as a run blocker that scouts covet along with the athleticism, balance and girth to stone pass rushers. He is not as clean of a player as the Irish’s (Quenton) Nelson but plays a more important position (not to mention one with less depth) and therefore could be the first offensive lineman drafted in 2018.”

Six Longhorns will be working out at the combine. Safety DeShon Elliott, cornerback Holton Hill and linebacker Malik Jefferson look to be slotted for the second or third round, at best. A lot will depend on how they look in Indy.

Four other players with ties to Texas are potential first-rounders.

One of the most intriguing prospects is UT-San Antonio’s Marcus Davenport, the receiver turned defensive end. Davenport was only a composite two-star recruit, as rated by 247Sports.com, when he signed with the Roadrunners in 2014. Now, he’s projected as one of the best available pass rushers after North Carolina State’s Bradley Chubb.

Kiper projects Kirk to Super Bowl champion Philadelphia, saying, “He’s not a diva receiver. He works hard, has the playbook in his hand all the time.”

Mayock says Kirk and Alabama’s Calvin Ridley are the two best route runners available, but slot receivers aren’t as coveted as those who play outside.

Washington and Sutton were far more productive than Ridley and Kirk. This past season, Washington won the Biletnikoff Award as the nation’s top receiver. And some team will fall in love with Sutton’s perfect size. He’s 6-4, 217 pounds. Sutton also is a safety turned receiver who even played for SMU’s basketball team.

The quarterbacks and receivers will begin their testing Friday followed by workouts on Saturday. What’s left of the limelight will then be turned over to the defensive players, who will take over Indy for the combine’s final two days.