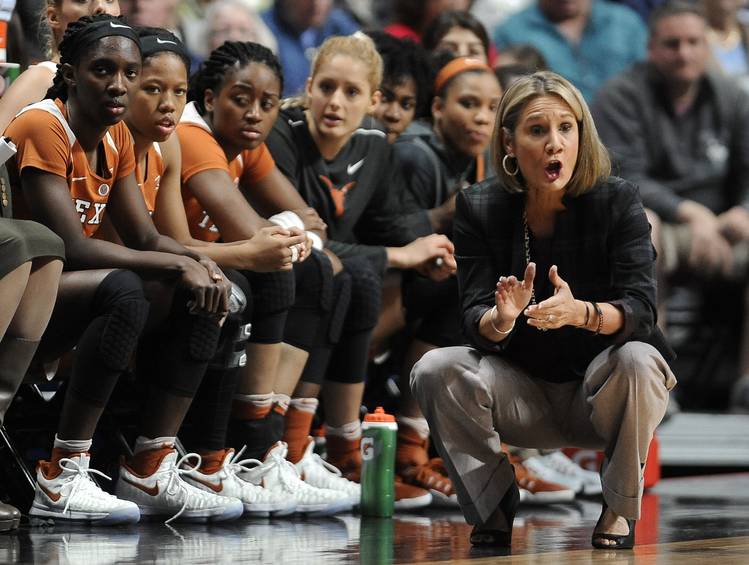 Texas coach Karen Aston has led the Longhorns to nine wins in their last 10 games heading into the Big 12 tournament in Oklahoma City. (Associated Press/Jessica Hill)

Brooke McCarty believes Texas is entering the post-season on a high note that did not exist last year.

“Last year we hit a wall,” said McCarty, the Longhorns’ 5-4 senior point guard on the eve of this weekend’s Big 12 tournament in Oklahoma City. The seventh-ranked Longhorns, who are seeded second and don’t have to play until Saturday evening, have won nine of their last 10 games.

That includes Tuesday’s 79-66 victory over Oklahoma in the regular-season finale. All nine victories during the span have been by double figures.

By comparison, the Horns entered last year’s Big 12 tournament by losing three of their last four games, including a 70-66 loss to Iowa State on senior night.

“It does feel different this year,” McCarty said. “People have taken more pride in their nutrition. Last year we were dead looking ahead. This year we don’t have any of those problems.”

Texas (24-5, 15-3 Big 12) is projected to be a No. 2 seed when the NCAA Tournament begins in two weeks. That would give the Longhorns a home-court advantage for the first two games of the tournament.

“There’s a different energy level (this year),” Aston said. “It’s hard to compare year after year after year. The schedule we had last year maybe took a mental and physical toll from the very beginning.”

Aston added that the players will get a break after the Big 12 tournament because the NCAA Tournament doesn’t begin until March 16.

The Longhorns will be able to “push the reset button” after this weekend’s tournament at Chesapeake Arena. She said transfer post Jatarie White might benefit most after completing her first season against Big 12 opponents.

On a negative note, senior forward Audrey-Ann Caron-Goudreau continues to be sidelined after having wrist surgery last week. There is no timetable for her return. Holmes — last year’s Big 12 freshman of the year — has made the majority of starts during her absence.

Three make all-conference: For the second straight year, senior guards Ariel Atkins and McCarty have been named to the All-Big 12 first team. Junior guard Lashann Higgs made the second team in a vote of Big 12 coaches. Atkins and Higgs also were named to the Big 12 all-defensive team. Baylor center Kalani Brown earned player of the year honors and Baylor’s Kim Mulkey was named coach of the year.

His Texas future may be at first base, but Zach Zubia is already contributing at the plate