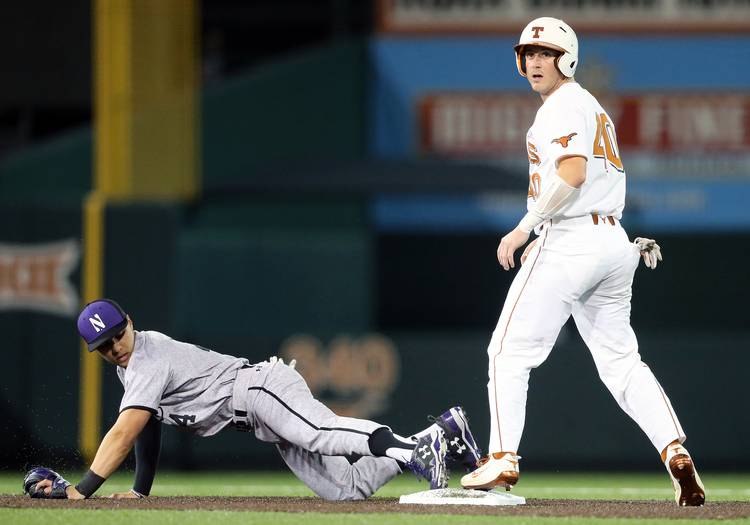 Texas Michael McCann looks for the safe call while Northwestern's Alex Erro checks to make sure his foot was on the bag at UFCU Disch-Falk Field on March 2, 2018. JAMIE HARMS / FOR AMERICAN-STATESMAN

For Northwestern’s Wildcats, revenge was a dish best served after an 87-year wait.

Texas never led at UFCU Disch-Falk Field on Friday night, and the Longhorns wasted several scoring opportunities in a 6-2 loss to Northwestern. The win was Northwestern’s first in seven attempts against Texas, although the two teams last played in 1931.

The loss was Texas’ second at home this season. UT’s overall record dropped to 5-4.

“I’ll tell you what, Northwestern came in here ready to play and they beat us in all phases of the game tonight,” Texas coach David Pierce said. “They ran the bases really well, they played great defense, they pitched, stayed off the fat of the bat.”

Texas was led offensively by designated hitter Zach Zubia, who drove in his team-leading ninth run in the fifth inning. Zubia went 2-for-3 with a walk. Zubia, however, did not score, which was a recurring theme for the Longhorns.

UT stranded 10 runners on Friday. A runner was marooned on third base in the third, fourth and fifth innings. Those innings ended with two pop-ups to infielders and a groundout.

“It’s 90 feet, you get a run and we’re in the ball game,” catcher Michael McCann said. “It’s very frustrating. We really have to grind out at-bats better and quit swinging at the stuff in the dirt and just have better at-bats all together.”

Northwestern (3-4) broke a 1-1 tie in the fifth inning when Jack Kelly doubled home two teammates. Jack Dunn led off the sixth inning with a blast over the fence in left field. The Wildcats also scored on a sacrifice fly and David Dunn’s ninth-inning triple.

Saddled with the loss was junior Chase Shugart, UT’s reliever-turned-starter. After a strong debut in the rotation on Feb. 17, Shugart has given up 10 earned runs over his last two starts. Shugart struck out six over his six innings, but he also surrendered six hits and five runs.

“Chase had good stuff tonight,” McCann said. “His stuff was working really well except the ones that he left up sometimes or the ones that caught too much of the plate, and they capitalized on it. Unfortunately, they had runners on bags when that happened.”

Around the bases: Nolan Kingham (1-1; 3.00 ERA) and Blair Henley (1-0; 0.82) will start for Texas in Saturday’s double-header with Northwestern. On Monday, Henley was named the Big 12’s Pitcher of the Week. … Junior Kody Clemens extended his career-long hit streak to nine games with a seventh-inning single. Clemens also drove in a run with a groundout. … Duke Ellis picked up two of Texas’ seven hits from the ninth spot in UT’s batting order. … Northwestern senior Tommy Bordignon was credited with the save after throwing three innings of no-hit relief.

Texas, Baylor are playing for pride but others face high stakes in Big 12 women’s tournament

Fate brought Texas’ Jordan Windle to the U.S., he hopes it takes him to the Olympics