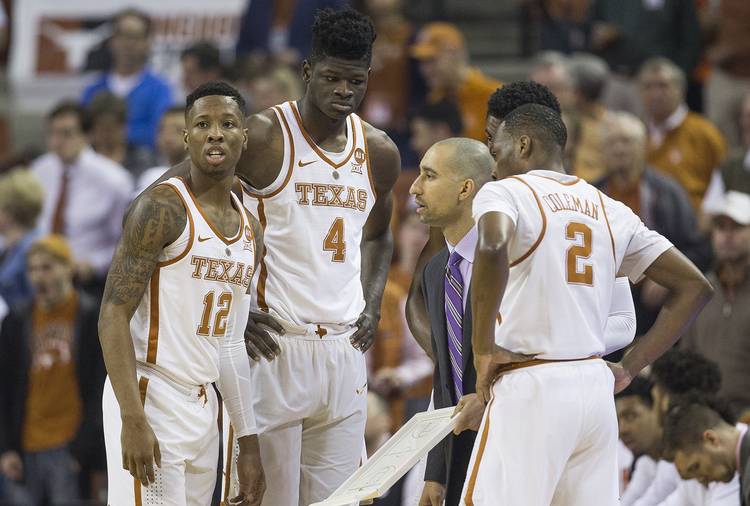 There’s no need to sugarcoat it. If Texas beats No. 20 West Virginia on Saturday, the Longhorns are likely in the NCAA Tournament. If they don’t, hello, NIT.

Typically, it’s hard to paint any regular-season finale in such polar opposite positions. But that’s how it appears at the moment.

Of course, regardless of what happens at the Erwin Center, Texas (17-13, 7-10 Big 12) can still get an automatic NCAA berth by winning next week’s Big 12 tournament in Kansas City. The odds are slim UT could win four games in four days, though.

So it comes down to whether the Longhorns can muster a win with a hobbled Mo Bamba (sprained toe) and without Eric Davis Jr. (still being withheld by UT compliance) against the team that won by 35 back in January in Morgantown.

“Yes, we’ve talked bout the ramifications of the game,” UT coach Shaka Smart said with a laugh on Friday, trying to ease the tension.

Texas has gone into a bunker this week since returning home from Kansas on Monday. No players were made available to reporters late in the week, as is custom. Saturday is supposed to be senior day, but UT has no scholarship seniors playing their final home game.

Senior walk-ons Isaiah Hobbs, Ryan McClurg and Joe Schwartz will be honored, along with four support staff members, in a brief ceremony beginning at 10:40 a.m.

Smart spoke with reporters on Friday afternoon. “You have to strike the balance as a player between the extreme sense of urgency that we should and will have going into the game and how important it is,” he said, “and also, being able to play, as we say, aggressive, confident and loose.”

In all reality, this is Bamba’s last regular-season game at Texas. The freshman star is widely expected to jump into the NBA draft this summer. The Big 12’s leading shot blocker is projected as a top-10 pick.

Bamba, the 6-11 center from Harlem, N.Y., may not be healthy enough to play. He did not travel to Lawrence on Monday and did not practice in the early half of the week. He’s averaging 13 points and 10.6 rebounds this season but suffered the toe injury against Oklahoma on Feb. 17.

“We got some good news this week in terms of the possibility of him being able to play soon,” Smart said. “But his status is day-to-day. His status could change any day.”

The Longhorns’ postseason status hangs by a thread, too. The school has not missed back-to-back NCAA Tournaments since 1987 and 1988. The Horns finished last in the Big 12 last season and did not play in any postseason tournament.

Smart does not want to become a coach who had back-to-back, top-10 recruiting classes with two first-round draft picks — and missed the NCAA Tournament both years. UT’s Jarrett Allen was taken 22nd overall by Brooklyn last spring.

Still, Smart has tried not to act like this is a do-or-die matchup around the players. “If you approach every single play as a situation where ‘I don’t want to mess up’ or ‘I don’t want to make a mistake,’ we’ve certainly seen with these guys in the past that doesn’t work,” Smart said.

The Horns simply need to show up and play like they did against the Jayhawks. It was a two-possession game in the latter stages of the second half before Kansas pulled away and won by 10. Five different players finished in double figures, and Kerwin Roach II led the way with 18. The Horns have played well at home all season; they’re 12-4 at the Erwin Center.

With a victory, West Virginia (22-8, 11-6) can march into the postseason with a four-game winning streak. Coach Bob Huggins isn’t in the business of giving games away, though.

The reality is Texas needs this more than his team does. By Saturday afternoon, the Longhorns will know where they stand.

Texas, Baylor are playing for pride but others face high stakes in Big 12 women’s tournament